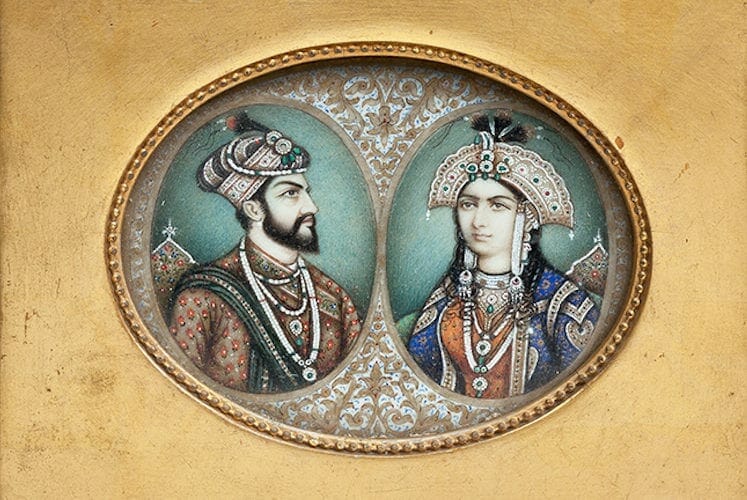 This monthly survey highlights some of the more notable art+design happenings in metro Atlanta. Jerry Cullum, the winner of a 2020 Rabkin Prize for arts journalism, has written about visual art in Atlanta and beyond for decades.

Three Atlanta museums. Three traveling shows about different cultures (Persian, Islamic, Mayan)  The particular emphases of each exhibition may illuminate how each institution approaches its mission of presenting art and information — but that’s a story for another time. Apparently by chance, two of the exhibitions overlap on topics infrequently addressed in Atlanta.

Bestowing Beauty: Masterpieces From Persian Lands, at the High Museum of Art through April 18, has a nearly impossible mission that it executes admirably but incompletely. This was inevitable. Persia (which in 1935 became known as Iran, the name already used within the country) has a culture that evolved from its approach to handling the swirl of societies in westernmost Asia, a culture that reflects centuries of alternating conflict and cooperation.

Presenting both its artistry and its meaning through works from a single private collection, however comprehensive, is beyond the creative resources and mission of almost any art museum. The adroit deployment of explanatory notes alongside the exhibit’s range of work — from calligraphy to carpets to representational art including portraiture — at least makes a start at the task. From “Bestowing Beauty: Masterpieces From Persian Lands” at the High Museum: Nasir al-Din Shah of Iran (circa 1848), opaque watercolor and watercolor over traces of graphite on woven paper.

There also are hints of other cultural interactions that aren’t mentioned directly. A stunning carpet that comes from the collection of the last kings of 20th-century Italy reminds us that the ownership of Persian carpets was as much a mark of prestige and sophistication in Europe as in the land in which they were created. Even more so if the owners knew that the garden carpet design symbolized paradise.

For more about the complex implications of such carpets, Atlanta viewers can see Wondrous Worlds: Art & Islam Through Time & Place at Emory University’s Michael C. Carlos Museum through May 9. New Jersey’s Newark Museum of Art, where the show originated, has done an extraordinary job of presenting a maximum amount of information while navigating any number of unacknowledged moments of conceivable controversy.

This creates a few strange moments with wall texts (as when the European school of painting known as Orientalism is briefly acknowledged). It also incorporate details that reflect the richness of Islamic culture and its centuries-old impact on Europe. Contemporary West African textiles are discussed at some length, with particular attention to printed fabrics with Islamic designs that claim Javanese ancestry. There is more going on behind the scenes here than most visitors will care to know, but what is presented is readily accessible, and fascinating.

What most visitors will care to know about is presented enchantingly as well as responsibly, as older forms of cultural interchange are illustrated by, for example, ninth-century Iranian ceramics with Chinese influences, and Chinese ceramics from the same period with Iranian-influenced motifs. (A Tang Dynasty horse sculpture featuring a foreign rider is included to illustrate the Silk Road’s cultural impact and because the genre has delighted museum visitors in recent decades.)

It’s remarkable that the exhibit manages to incorporate calligraphy, painting, textiles (from carpets to wall hangings to clothing), ceramics, photography and any number of subcategories while using the most basic shared features of Islamic cultures as an organizing principle.

As presented at the Carlos, Wondrous Worlds begins and ends with contemporary art. It begins with Moroccan-American photographer Lalla Essaydi’s well-known feminist triptych Harem #1, in which a woman’s dressing gown matches exactly the color and pattern of the tiles on which she reclines (the pose is borrowed from European Orientalist painting). The show ends with Iranian-American émigré Afruz Amighi’s wire-sculpture evocation of minarets, in which the shadows on the wall are as important as the solid forms. (Essaydi’s provocative and spectacularly engaging photographs are known to Atlantans from exhibitions at Jackson Fine Art, whose website includes an iteration of Harem #1).

It’s a bit difficult but illuminating to turn from this multilayered show to the deliberately family-oriented exhibition Maya: Hidden Worlds Revealed, at Fernbank Museum of Natural History through May 9. The Fernbank website rightly highlights the show’s “wow” factor, with features designed to capture viewers’ attention and introduce them to the art, architecture, society and belief system of an ancient and contemporary Native American culture in Belize, Guatemala, Honduras and Mexico. That’s the difficult balancing act in which Fernbank engages. Artwork finds its  way in via the presentation of ways of life. Human societies appear alongside the lives and modes of living of plants and animals, and alongside the physical form of a changing planet. Instructional exhibitions (with explanations in English and Spanish) appear alongside the wonderful immediacy of Fernbank Forest outside, plus the outdoor Nature Gallery where the Levon Bliss photo exhibition Microsculpture (through May 2) reveals tropical insects in immense close-ups.

It would be even more instructive, if exhausting, to consider the role of art in other Atlanta museums. The human experience is complicated, and each museum views it from a distinct vantage point. We should stop occasionally to try to picture what the whole thing looks like. Forming that mental picture is becoming ever more difficult in our present moment of transition.