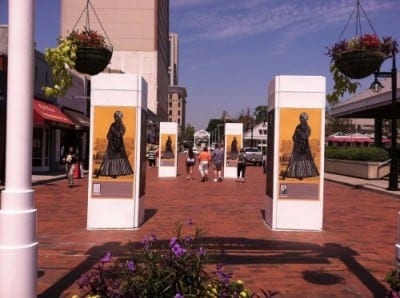 When the second incarnation of Underground Atlanta opened in 1989 — the first version lasted from 1969 to 1980 — city fathers (it was “fathers” then) expected that it would repeat the successes of Boston’s Faneuil Hall and other festival marketplaces developed by the late James Rouse. It was, for a while, a fun place to go, attracting both tourists and residents. Its fortunes declined as Atlanta’s neighborhoods matured and it could not compete with the restaurants, nightlife and shopping opportunities in Buckhead, Midtown and the suburbs. As with everything else in Atlanta, its difficulties also stem from racial politics, but suffice it to say that, in 2011, the historic site has devolved into a rather desolate enclave, a no man’s land between Georgia State University and government offices.

In an effort to breathe some life into the place and bring people back downtown, the Atlanta Office of Cultural Affairs developed “Elevate: Art Above Underground,” a two-month-long cultural initiative meant to enliven Underground’s spaces with visual art, poetry and performances. Organizing a project involving more than 20 artists and multiple locations is an ambitious, complex undertaking. Alas, I must report that “Elevate,” like Underground itself, is a well-meaning failure. Although the larger works — the murals, Deanna Sirlin’s colorful “carpet” on the grand staircase, “Harriet Rising” by Lisa Tuttle and Alice Lovelace, an installation (above) inspired by Harriet Tubman — have visual impact individually, the many smaller pieces are so spread out that the project is devoid of synergy and energy. To make matters worse, there are no labels identifying the artists or linking the pieces to the project. Those hung in empty storefronts barely register, partly because they are not well lighted. It’s likely that many visitors don’t even know “Elevate” is going on.

(The performances, which I have not attended, may be a different story. This weekend’s event sounds particularly intriguing: performance artists from French theater collective Dérézo will collaborate with Atlanta’s Théâtre du Rêve in eight site-specific performances. A jazz concert will follow.) The major flaw of “Elevate,” however, is that much of the stationary artwork is not particularly good. Maybe the pickings were slim among the applicants. Maybe the priority was to give younger artists an opportunity to stretch, a worthy service. Experimentation is art’s research and development; flops come with the territory.

But what’s in it for everyone else? How does mediocre art build, educate or edify an audience, much less serve OCA’s stated mission to “enhance Atlanta’s reputation as a cultural destination”? How does it serve Underground?

To be fair, the quality issue plagues many Atlanta arts projects. Many in the arts community seem to set more store by a well-attended, self-congratulatory opening-night party than what’s left the day after.

Some would argue that culture here is a work in progress. Point taken. You could say, for example, that the second installment of Living Walls, the street-art extravaganza, was better than the first. My feeling is that we are too easily contented with the status quo. At some point, the work-in-progress argument becomes an excuse for running in place.