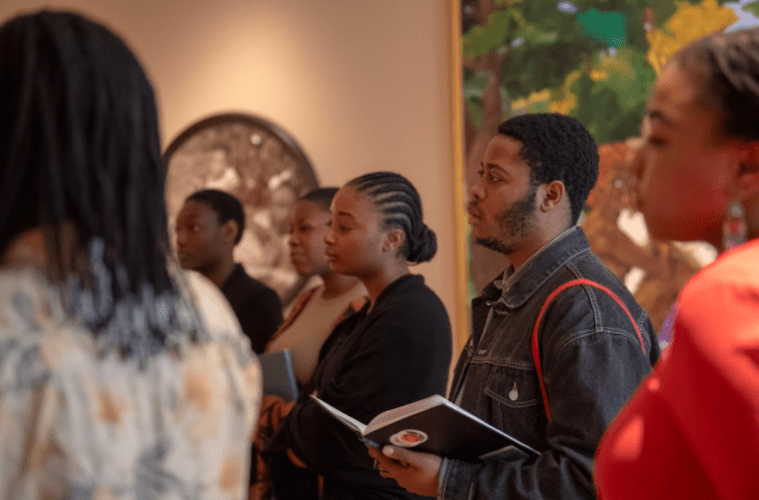 African Americans make up only 4% of the country's art museum curators. The AUC Art History and Curatorial Studies Collective wants to make sure the next generation of curators is much more diverse. (Photos by Gediyon Kifle)

The Atlanta University Center is revered for its history of churning out some of the most-recognized Black scholars through its consortium of historically Black colleges. This cluster of higher learning, however, is on a mission to bring about holistic change in the arts with the AUC Art History and Curatorial Studies Collective.

“There are many ways in which this program is obviously timely, but it’s also very much ahead of the times when we think about the demands that are now being voiced based on mounting social unrest,” says Cheryl Finley, director of the AUC Collective. This piece is Part 4 of our “Creative in Residence” guest editor series with Floyd Hall. He’s a prominent writer, producer and documentarian.

In 2015, the American Alliance of Museums conducted the first in a series of studies on workforce diversity in U.S. art museums. The survey, which specifically looked at gender and ethnic variation, revealed that African Americans accounted for a mere 2% of all curators. A follow-up study in 2018 indicated that the number had only doubled to 4% within the three-year time span.

Busting that 4% ceiling is a motivating factor for the AUC’s “wraparound” program, designed to build future multidisciplinary art leaders.

Thanks to a $5.4 million grant from the Alice L. Walton Foundation, a pilot program launched two years ago, as envisioned by three people: Lowery Stokes Sims, former curator emerita at the Museum of Arts and Design; Andrea Barnwell Brownlee, director of the Spelman College Museum of Fine Art; and Finley. They secured accreditation and three programs are now available to students in the Department of Art and Visual Culture at Spelman. The robust curricula stands on the main pillars of awareness, exposure and development. These pathways reinforce the Collective’s efforts to diversify talent not solely in terms of race and gender but also to produce and place graduates in a range of art jobs.

The AUC Collective readies rising high-school juniors and seniors in its Early College program through a partnership with the High Museum of Art. The most recent cohort comprised 20 students who, according to program coordinator Lauren Jackson-Harris, learn from working artists, art lawyers, curators and administrators, among others. Furthermore, the Collective aims to combat financial and perceptual barriers and career obstructions caused by a lack of access to mentors. Students have scholarship opportunities, paid summer internships and a community of networks to ensure their success during and after college.

Covid-19 has challenged the program, but the Collective has devised a virtual strategy to curve disruption to its goals. The team converted the internship and Early College programs to virtual delivery in early summer, Finley says. Further changes included a new interactive space on its website that links students and faculty to resources at museums and adjacent institutions. The pandemic has presented challenges to the new AUC Art History and Curatorial Studies Collective, but its first students graduate in May 2021.

“I think for both programs, by going virtual we could be around the world,” Finley says. “You can have, almost, a more enriching experience than actually having to bring people physically to you in the space of the AUC or a different place.”

Program manager Rachel Brown facilitates strategic partnerships to help carry out the Collective’s mission by drawing in high-level speakers and opportunities found locally, nationally and internationally. “Over the summer we welcomed guest speakers from countries such as Germany, France and South Africa,” Brown says. By leveraging relationships outside of the AUC, the team strikes a balance between enrichment and accessibility. This fine-tuned ecosystem is a fruitful move that meets the international students’ rising interest in the program.

“For the first year, [enrollment] was 16. We met that this year. We’re now at 24, and we’ve actually surpassed that for fall enrollment,” Finley says. Next year it will be 30 and then 36.

The first round of Art History and Curatorial Studies graduates cross the stage in May 2021, a forthcoming marker of the program’s increasing success.