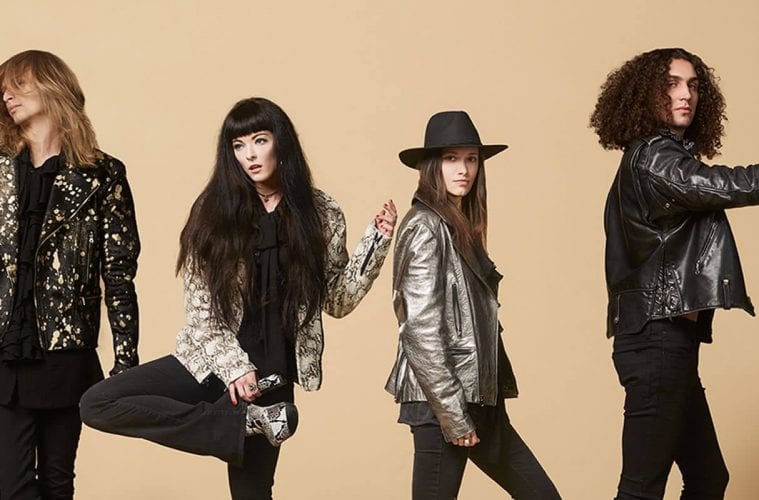 A conversation with Starbenders about music as activism

Starbenders, a glam rock four-piece band from Atlanta, has always believed in making music that’s for everyone. This attitude of inclusivity incited the plans for Friday Night Classic, a show they’re hosting alongside Lost-n-Found Youth, to raise money, promote awareness and collect donations for local homeless LGBTQ youth.

The band has been rising in notoriety for the last couple of years thanks to their dynamic shows, mystifying style, powerful lyrical and vocal performances by lead singer Kimi Shelter and nostalgic rock-and-roll presence. They harken to much of classic rock in physical appearances — envision David Bowie, Queen or Heart — but their music is a unique and compelling collage of classic rock, grunge, punk and glam. They appeal to teenage angst both in aesthetic and attitude, positioning themselves naturally to reach out to Atlanta’s homeless lesbian, gay, bisexual and transgender youths with a message of solidarity.

We talked with bassist Aaron Lecesne and guitarist Kriss Tokaji about their upcoming event.

ArtsATL: How did Starbenders first discover Lost-n-Found? And how did this develop into the idea for Friday Night Classic?

Aaron Lecesne: The shelter itself is off of Cheshire Bridge Road, and so any time we would be getting rid of stuff, stuff that would normally go to Goodwill, we would donate there. We would also shop at the store too. There is a lot of cool vintage clothing [at Lost-n-Found Thrift Store]. So the more we found ourselves going over there, the more we identified with their cause. We wanted to find some way that we could help them out or help spread awareness for what they do. And this turned out to be the best way to do it. 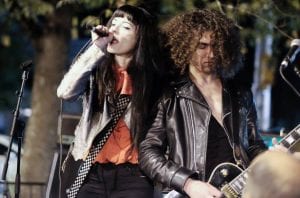 Starbenders during a live performance in 2016. (Image courtesy artist.)

ArtsATL: Did anything in particular draw you to the cause of Lost-n-Found? Is Starbenders particularly passionate about helping LGBTQ youth overcome issues of homelessness?

Kriss Tokaji: I think we all are. It’s something we definitely believe in. Which you know we stand by 100% and any way that we can help out with our music is great.

ArtsATL: Do you think that these concepts currently influence Starbenders’ content and songwriting process?

Lecesne: Yeah. There’s a certain sense of disenfranchisement I think that we all grew up with being musicians — being a little bit different. And obviously our struggles are a little bit different than what the beneficiaries of this charity have gone through. But there is solidarity there — it’s something we are sympathetic towards and passionate about. You feel that in our music; we write it from that perspective. So I think it does speak to that spirit of wanting to find some place where you can belong.

ArtsATL: In light of today’s political climate and social unrest, do you think that it is especially important for artists, locally and internationally, to be advocates for these causes and to ensure that the disenfranchised groups of our communities are supported?

Tokaji: We don’t really want to say that our music is just for one specific group. I think that the way that we sound and the way that we present ourselves [can lend itself] more towards that disenfranchised, kind of isolated, angsty teenager. Cause that’s the music that we grew up with, like we grew up in that same kind of environment. But I think that it’s good that we want to let people know that we are music for everybody. You take it however you want. You know, I think that we care about our songs [and that they] kind of focus on having a good time and enjoying life. However you feel about whatever our songs mean, that’s up to you.

ArtsATL: Friday Night Classic is an all-ages show. Do you enjoy being open to a younger crowd?

Lecesne: Oh yeah, we tend to do better with those in a way. Like I said, art is for everybody. It’s not for 21 and up; it’s not for 18 and up. All should be welcome. And that’s kind of the theme of this show.

ArtsATL: Has Starbenders supported or played other activism-related events before?

Lecesne: Yeah. Last year we did a Sadie Hawkins dance at the Earl. That was to benefit My Sister’s House, a women’s shelter  [. . .]  We also did an autism awareness event in Huntsville, Alabama. That was for Open Door Inc. [. . .] Over the summer, we did some work with Girls Rock Camp. That’s something that’s obviously very special for Kimi, you know, playing in a club that’s sometimes a boy’s club. So, Girls Rock Camp is special to her. And the Roller Derby, too.

Tokaji: We love Roller Derby. We’ve played there a couple of times, and it’s always been a blast.

ArtsATL: What do you hope people take away from the music and the cause of the event?

Lecesne: We are hoping that people bring things to the show too. Definitely hoping they bring stuff in the form of sanitary products like shampoo, soap, wipes, sanitizer. Also, they can bring clothes, household items, food gift cards, things that people can actually use: that the shelter can use [. . .] Lost-n-Found [will have] a representative accessible [to talk to] throughout the night. So, all I would really hope is that people will come away with an awareness for what this organization does and how important it is, because the people that they serve don’t have anything else. And you know, sometimes when you are that last lifeline, that last call to somebody, it’s very important that people are aware that it exists and that it needs support, it needs help; and that’s what I’m hoping they’ll take away.

ArtsATL: So is Starbenders working on new material? What’s in the near future for the band?

Tokaji: We got a new single coming out on March 31. We are always writing.

Lecesne: Typically, once we go through a bunch of  released singles, we compile them together into an album. We’ve released two so far since the last album [. . .] Constantly writing, constantly writing [. . .] We rehearse around four times a week. Constantly refining the craft.