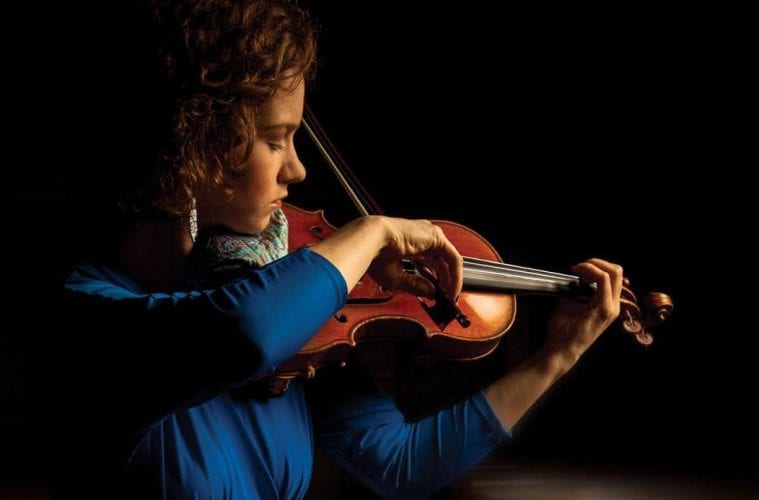 Review: Hahn and Levin play a masterful Spivey recital of classics and contemporary

On Sunday afternoon at Spivey Hall, violinist Hilary Hahn and pianist Robert Levin performed a recital of music by Bach, Abril, Türk, Mozart and Beethoven. It was an engaging, persuasive performance of three stalwart classical works and two freshly contemporary ones.

Hahn and Levin opened the program with J.S. Bach’s Sonata No. 6 in G major, BWV 1019. Rather than involving a “continuo” part where the keyboardist improvises, this sonata happens to be one of a group where the keyboard part is entirely written out. An interesting aspect is that the extensive Allegro third movement is for keyboard alone, during which Hahn stepped to the side. Otherwise, the violin and keyboard shared roles of equal importance — a practice which would later disappear for a while in early Classical-era violin-piano sonatas, in which the violin would be secondary to the piano. Only with the later sonatas of Mozart and Beethoven would the full balance of collaboration be restored, something to be witnessed later in this program.

In the meantime, two contemporary works were up next, each a solo work written for its respective performer. Hahn played Partita No. 6 for solo violin by Spanish composer Antón García Abril, the last of six partitas he recently wrote for her. Abril’s “Partitas” are not at all the dance suites the title would lead one to expect, but a set of single movement works inspired by Hahn, with subtitles which, taken in order, are a kind of poetic acrostic on HILARY: “Heart, Immensity, Love, Art, Reflexive, You.” The sixth one (“You”) is an ambitious, emotionally charged work, but one which seems to fit the hand of the violinist well, played brilliantly and convincingly by Hahn.

Levin followed with a solo piano work, “Träume” (“Dreams”), composed in 2012 for him by Romanian composer Hans Peter Türk, following the death of Türk’s wife, Gerda, as a kind of spiritual dialogue between the three of them. The emotions in this quasi-improvisatory work range from an atmospheric chiming of bells to dark rumblings and anguish, ending in a benedictory, peaceful quietude.

Hahn returned to the stage to join Levin in Mozart’s Sonata in E-flat major, K. 481, for violin and piano. Written at the end of 1785, it is a mature work in which Mozart re-achieves that aforementioned balance of collaboration between violin and piano, with Hahn’s violin part coming more and more to the fore as the piece progresses. That was most observable during the course of the structurally innovative slow second movement, and the equal collaboration is fully present in the final, dance-like theme and variations of the work’s concluding Allegretto movement.

The apex of the afternoon was a muscular, energy-infused rendition of Beethoven’s Sonata No. 9 in A major, Op. 47 — famously known as the “Kreutzer Sonata.” Full collaboration was front and center along with some tensive musical discussion between the instruments. Ultimately, Beethoven has them resolve their differences at the end of this flagship of violin-piano repertoire. Hahn and Levin laid down a powerful, compelling performance for the packed hall.

Hahn and Levin returned to the stage to perform two encores: “Mercy” by Max Richter, one of the featured works in Hahn’s “27 Pieces” contemporary encore project, and “Cortège” (1914) by Lili Boulanger, the prodigal younger sister of Nadia Boulanger.