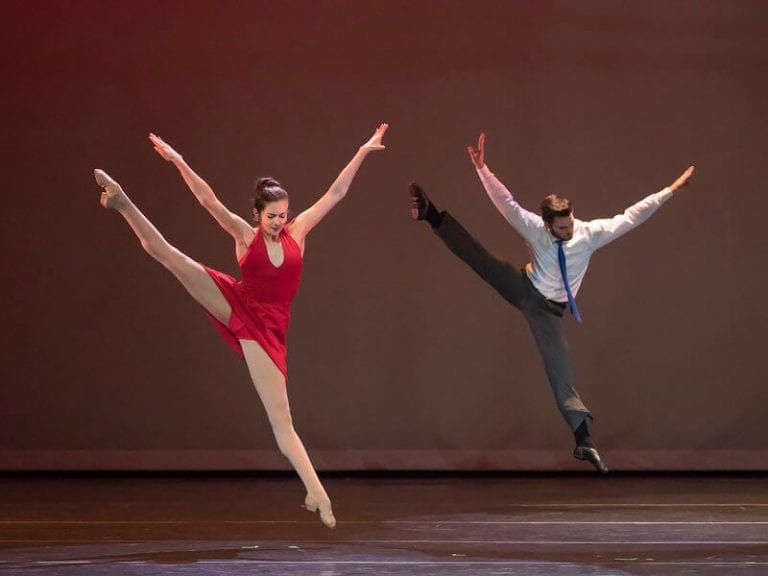 Choreographer Jordan Keyon Smith’s Ever Evolving was one of the highlights of Dance Canvas. (Photo by Richard Calmes/Dance Canvas)

A window into the possibilities of dance as the art form as it embraces modern technology was the overriding theme of last weekend’s “Introducing the Next Generation,” Dance Canvas’ showcase of emerging choreographers.

In its ninth season, the showcase was performed for the first time at Georgia Tech’s Ferst Center for the Arts. This year’s choreographers were asked to explore the intersection of movement, science and technology. The result was an original performance that shed light on new ideas and future possibilities for dance.

The show kicked off with Isaac Lerner’s Space Between, a piece inspired by film and editing that explored narrative through space and lighting. Performed by dancers Louise Benkelman, Marjorie Gross and Honza Pelichovsky, this multi-layered work incorporated dance on film in conjunction with dance on stage. One dancer would perform on stage while also featured in a dance film on the screen behind them. It worked when the choreography on stage matched what was on film, but when it differed, it became difficult to know where to focus.

The first duet burst into a seamless flow of sequential movement that carried out into the rest of the piece. Although the idea of space was central to the piece, there was a lack of chemistry between the male and female dancer. The narrative of the piece moved along through spatial arrangements and lighting techniques that added perspective, contrasted warm and cool colors and revealed shapes on stage.

The third piece in the program and one worth noting was Jordan Keyon Smith’s Ever Evolving. This energetic and vibrant jazz piece was enjoyably refreshing and captivating. The piece started out with the classic, soulful jazz music of Duke Ellington and John Coltrane, and the choreography embodied classical jazz dance.

The dancers started the piece in black costumes, with the females in dresses and the males in slacks and button-ups. Only one female dancer was different, clad in a bright blue dress. As the energy picked up and the song changed to the upbeat dance music of Ray Foxx’s “The Trumpeter,” an elegant costume change was suddenly orchestrated as the dancers in black went off stage only to appear seconds later in bright, eye-popping colors.

The piece continued with high kicks, isolations, extensions and jazz walks galore. The wide smiles and contagious energy of the dancers was never lost, and group formations were exciting as all 10 dancers moved together in unison. Doses of ballroom dancing and hints of Latin vibes kept the dance fresh and relevant. Through its music and choreography, the piece was a true depiction of jazz as an ever-evolving art form that never ceases to excite and transform its audiences.

Another exploration of dance on film was Meg Morrissey’s Id, a movie short that featured Morrissey and fellow dancers Jon Caspian, Audrey Crabtree, Mackenzie Herndon, Leah Kelly, Gray Stoner, Kristel Tedesco and Dallas King-Wallis. Prefaced by Oscar Wilde’s quote, “They’ve promised that dreams can come true — but forgot to mention that nightmares are dreams too,” the piece included a series of distinct scenes and dance phrases.

The film frequently showed Morrissey tossing and turning in bed out of fear or distress. Her bed was seen both indoors and outdoors. Indoor scenes were dark and gloomy with little lighting. Outdoor scenes were, on the other hand, scenic and almost that of a dream with beautiful greenery and a captivating sunset. One of the first scenes was a duet performed by Morrissey and Caspian, filmed indoors, as they engaged in a dance of intimacy, struggle and slight aggression. Also filmed indoors was a scene that featured female dancers wearing all black and dancing in a room with little light except for that of what resembled the moon shining through the windows. This created an eerie and ominous mood, and the movement itself was powerful and sinister.

The film ended with a choreographed phrase performed by the female dancers outside against the background of a sunset. This time clad in green costumes that reflected their natural surroundings, the dancers’ movement was raw and organic as they enhanced the beauty of the scenery. With Morrissey placed in center of the other dancers, she was often evocatively lifted up toward the sun or faced it with her arms spread wide.

The finale was striking. Morrissey stepped out into the light, and the film immediately cut and the screen went black. It was a suspenseful close to the first half of the show.

As a whole, the showcase was invigorating and innovative. The experimentation with dance and technology leads to questions about what we can expect to see from dance in the coming years. Living in an increasingly technological age, it will be interesting to see how art continues to evolve and how emerging artists will incorporate these advanced concepts into their craft.