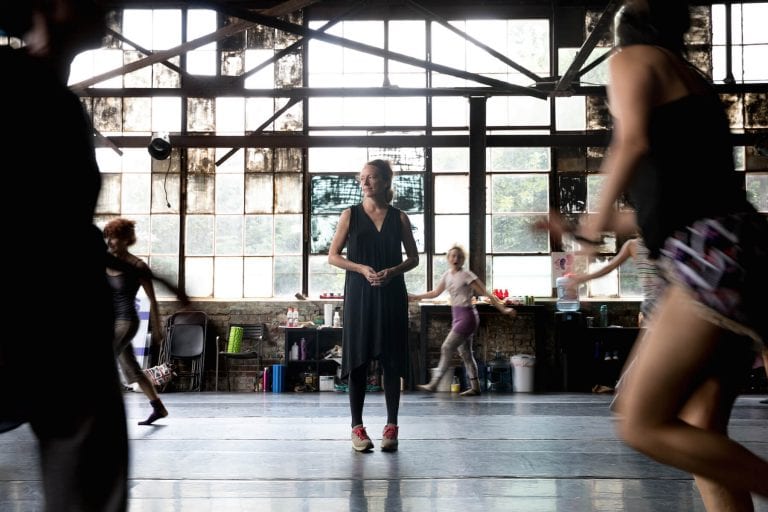 Lauri Stallings’ name is one synonymous with the Atlanta dance community, her particular practice, with her company glo, growing deeper as it looks inward: fostering site-specific works, community collaboration and “always thinking about public as a private matter.”

“You caught me in an away time,” Stallings smiles, “so I appreciate the challenge to understand a little more of where I’m at right now . . . which is in the midst of rest, reflection, lots of meditation and dreaming the challenges ahead.”

She’s found herself in an unexpected place with her practice, “a geography place — and perhaps even a philosophical place,” which is within “conventional settings.” This is a reference to Atlanta Symphony Hall and the High Museum, the sites of her two spring blockbuster collaborative pieces with the Atlanta Symphony Orchestra and Daniel Arsham, Orfeo and Hourglass.

The two works were interwoven, Stallings explains. “Hourglass and Orfeo were shared seeds of a similar nature, even a similar form . . . even though Orfeo just happened like over a few days. . . .  I feel like they were both living and growing and being toiled and invested in the same amount, the same duration.”

glo, the company of moving artists Stallings leads out of The Goat Farm Arts Center, has built a reputation for itself as an experimental entity cultivating intimacy and fluidity across various social, physical and psychic spaces. “glo is just this nimble little thing, and very slippery,” Stallings says with a fey twinkle in her eye. “I think we have this beautiful flexibility that allows us to slip in and out of these traditional places. Right now, it feels like to me a loosening, a breaking away from these historic constructs, reservations of sorts. And these two projects looked at that head-on, eye-to-eye, heart-to-heart . . . belly up the whole time. So the body language for each of those works was such a gift to explore.”

“I was as close to being in bliss as I have as an artist in that process,” she pushes, nourished by, “this need between people that becomes very genuine and tender.”

However, amidst these two bold projects, “there was this smaller project that’s really close to the nature of glo and the practice as a whole.” In Griffin, a town south of Atlanta, over the seven days leading up to the opening of Orfeo, Stallings, her company and volunteers focused on a historic Baptist church, “literally . . . bringing breath to the church, a sense of resuscitation.”

She pauses. “I’m always wary about these re- words: rebuild, reread, but this is definitely looking at space as a breathing place.” The group engaged with community members but in the space itself mostly spent their time scrubbing floors and foraging for salvageable materials. 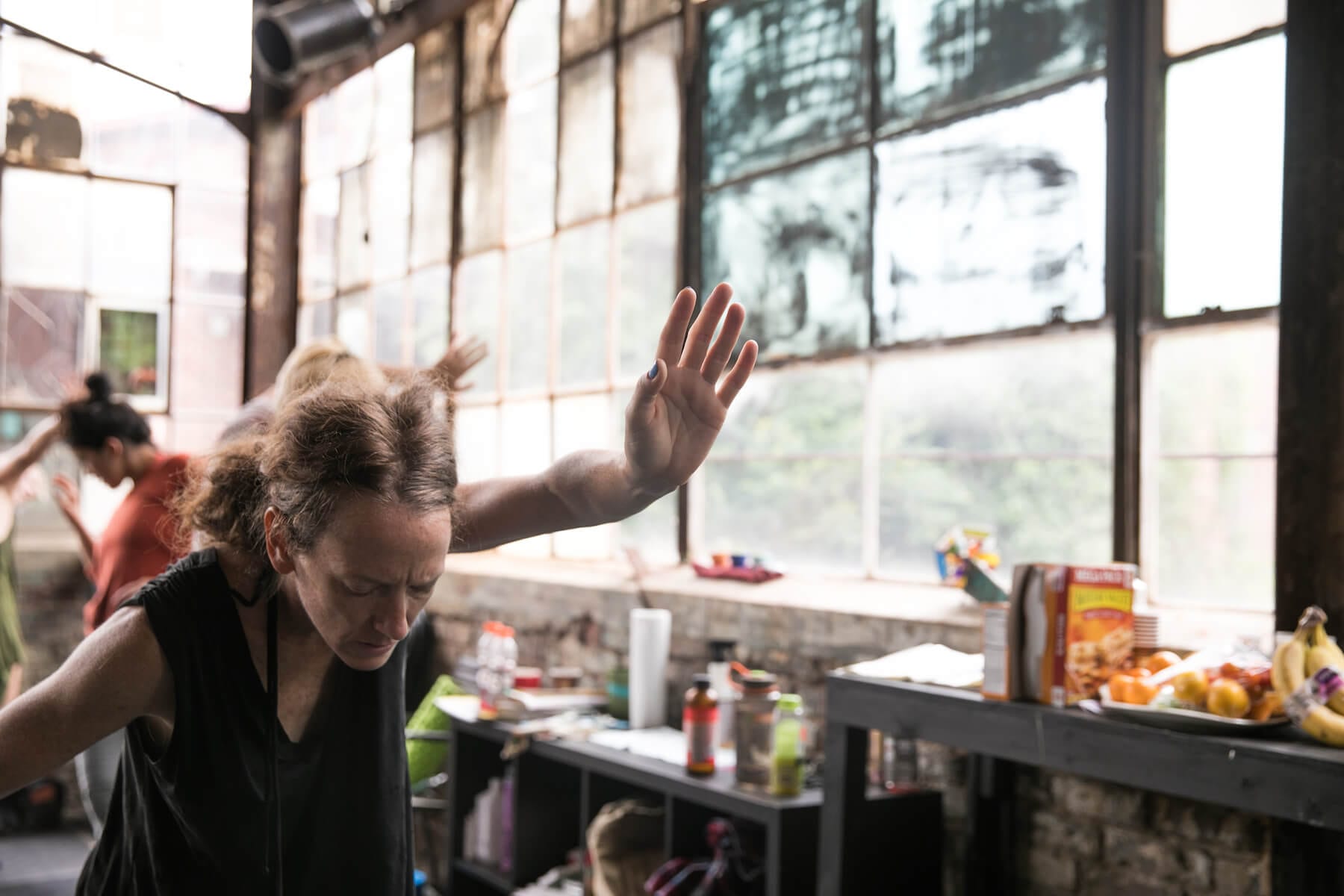 glo gravitates toward places “particular to complex histories and neighborhoods with particular needs” and intentionally selects locations for movement works across bridges, train tracks or the Chattahoochee River, as markers “where the city divides itself racially and spiritually.” She emphasizes, “the process around those projects is so much of the project itself, a lot of time sitting and listening . . . the artist at the table with people that maybe don’t even share the same value systems, certainly don’t necessarily have the same ideas.”

glo plans to work “hand-in-hand with the community . . . weaving and building ideas and possibilities around the church being a locus of sorts, a creative locus.” Stallings pauses briefly before adding, “so that’s very exciting and terrifying.”

“I’m always terrified by everything,” she says, smiling again, “all the projects.”

I ask her, how do you deal with the terror?

“Well,” she looks down, “I go back to the things I don’t mess around with, the things that aren’t so great. The grieving bodies. Humanity. Light. So I do a whole lot of checking in. I think I’m here to be aware, and go deeper, in kind of what I do. The rest, the terrifying part, it’s called process. . . . ” She pauses and tilts her head. “That’s a great question for all of us: What do we do with the terror? We keep working. We show up. Keep listening.”

The last time I ran into Stallings was at a small protest following the sale of Underground Atlanta. Stallings was present with two of her moving artists — who were performing throughout the protest — on the final day the streets above would still legally be considered public. I ask her, what led to glo being there?

She answers, “What led to us being there is that people needed for us to be there.” 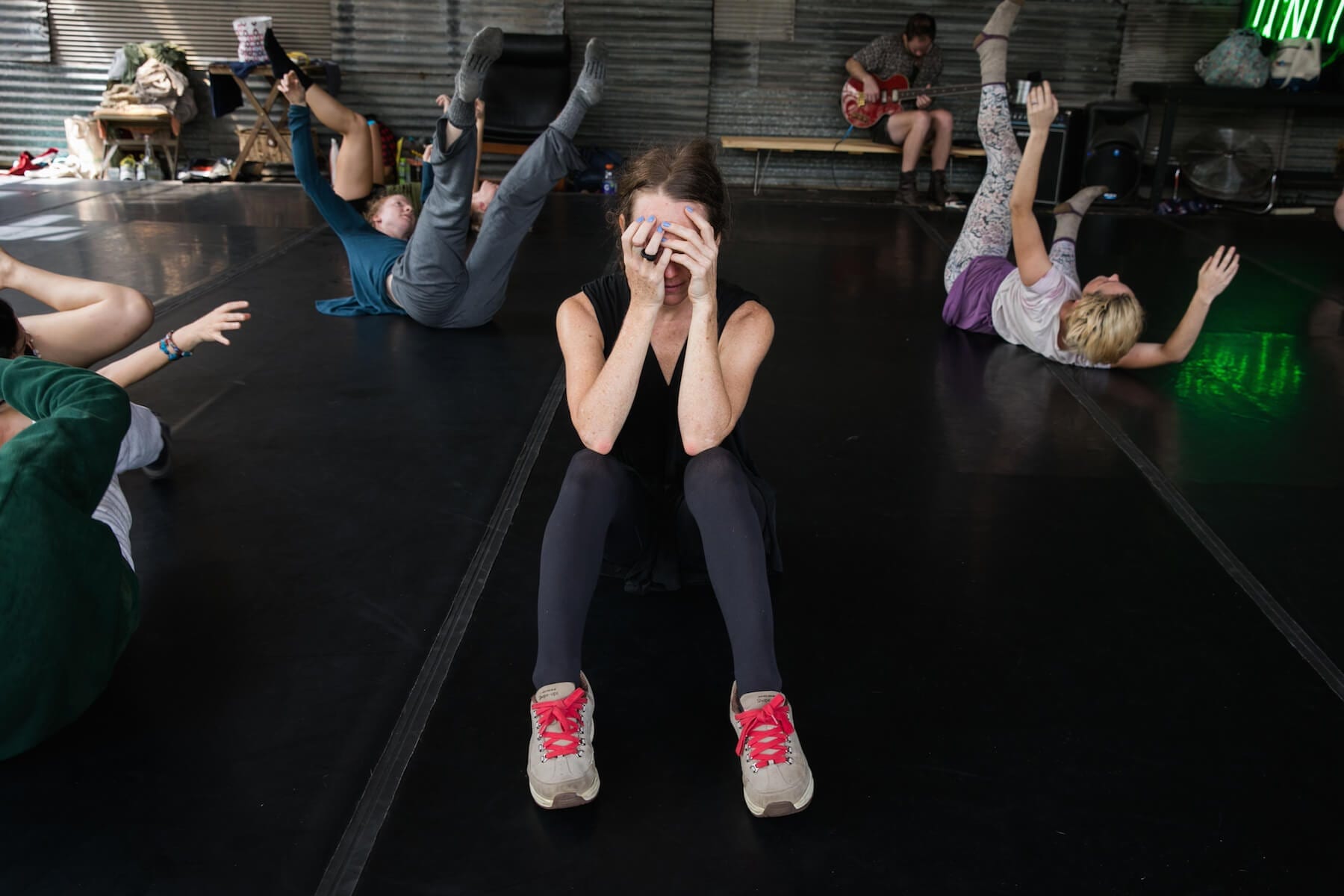 During the demonstration, a woman on a street above Underground Atlanta attempted to exorcise demons out of one of glo’s moving artists. While the woman — with her hand outstretched toward the artist’s head — repeated over and over variations of “In the name of Jesus Christ I drive out this demon” in a hollow, confident bellow, the artist continued to bend and flow, showing no effect in her demeanor. How does Stallings prepare performers for that kind of potential audience participation?

Stallings stops and pulls out her notebook, a labyrinth of mind maps and smudged pencil scribbles. “I wrote one thing down for you,” she says, shuffling through the pages, “and just checking in where I was at, because my tongue has been resting and I’ve just been absorbing and trying to find space.” She finds the right page and reads to me: “the relation between sensation and thought through the prism of movement, so sensation and thought . . .”

Stallings does not see herself as an activist, however, or a healer. Instead, she asserts, “I am an artist who deeply cares.” Yet her belief in the transformative power of the artist remains starkly apparent. “And what I love about art, and what I love, love, love about this practice,” she beams, “is that it does exactly what art is supposed to do: it brings all kinds of people together.”

Looking forward, Stallings has an exhibition opening at MOCA GA on July 15 and, as a Hudgens Prize Finalist, will participate in the August 19 group show featuring all four artists.

The MOCA GA exhibition, Stallings explains, “will happen concurrently for eight weeks with all of glo’s existing civic actions.” Interested in opening up the possibilities of a gallery space, Stallings emphasizes, “I see the gallery as a performance venue. I see it as a classroom. I see it as a place for collection. I see it as a social center.”

The exhibition, titled “the room for tender choreographies,” will involve the inclusion of various citizens from communities glo has worked with, such as the historic Baptist church in Griffin. The installation will also include, among other elements, life-size photographs of community members, dancing museum staff and blown-up versions of maps Stallings has made. These maps are a critical but until now quiet part of her choreography practice, which she sees as a kind of mapmaking in itself. 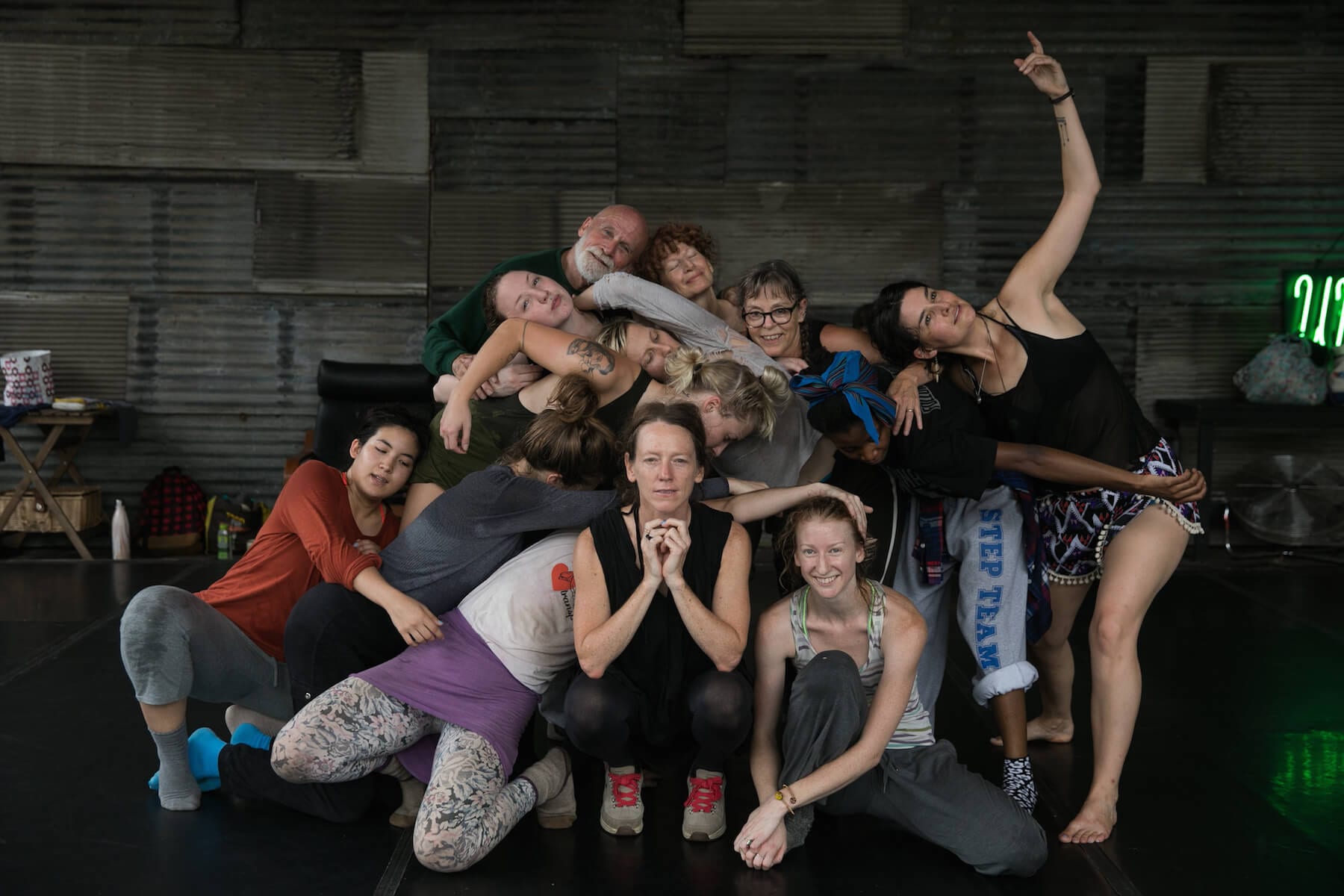 “For me,” Stallings says, “the thrill is to continue to experiment with choreography as a discipline that is not landlocked and even physically locked inside the constructs of dance or any other traditions but is . . . a complex and intellectual tool for weaving, for evaluating, for waiting, and ultimately existing in a place.”

Regarding the Hudgens exhibition, Stallings looks to continue and build upon these impulses, in the belief that “these traditional settings and ideas are loosening and changing, like so much in our country is changing.” She sees and treasures others seeing “the value of having living, breathing ideas and philosophy, thus movement, inside of these places, and a really . . . durational duration and persistence.”

“Ultimately,” she continues, the fact that, “the public is invested in building the subjects and not just objects, is really huge . . . I want to do my part in expounding and amplifying that conversation.”

As an artist working in ephemeral media, with moving human bodies the necessary vehicles of that work, Stallings calls collaboration her “greatest asset.” If awarded the Hudgens Prize, the funds would not solely go to her but rather would be “investing in a community and a platform of people and ideas.” The moving artists of glo, for example, are on a weekly salary.

Her current and ongoing influences include Heidegger, Erin Manning and Ernesto Pujol, whose book Sited Body, Public Visions she carries with her everywhere.

“I have so many books.” She shrugs. “I think, [as] an artist, you’ve just decided you’re going to be a student your whole life . . . the practice only exists because of a desire to listen and celebrate place. Most of the materials I’m working with, I feel as if they came before me, and I’m just a carrier of sorts, a pilgrim . . . that enters into these body/mind/heart spaces, and I’m willing to go the distance with them, get lost, get messy.”