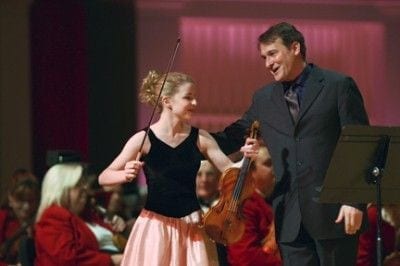 Christopher O’Riley, host of NPR’s “From the Top,” plays Chopin Society of Atlanta

By the conventions of the classical music biz, pianist Christopher O’Riley wears three distinct hats — as a touring virtuoso of the standard repertoire, as host of National Public Radio’s kid-musician “From the Top,” and as a radical with a soft edge, performing his own piano transcriptions of artsy pop, from Radiohead to Tori Amos.

Yet like so much else in the arts, those old norms, established in the late 20th century, are starting to seem like the historical anomaly. Cobbling together a career — an inexact mix of performer, composer, transcriber, teacher, showman, public personality sometimes holding minor religious orders, impresario — has always been the way to do it, and musicians have always been richer (at least in an artistic sense) for it. As well as any serious musician today, O’Riley, a smart and expressive pianist, embodies the new/old norm.

His latest CD is called “Out of My Hands,” covering songs by Portishead, The Smiths, Nirvana and others.

In two events, O’Riley brings his whole wild shebang to Atlanta starting Saturday. On Oct. 24, he will give an all-classical recital at the Roswell Cultural Arts Center, part of the esteemed Chopin Society of Atlanta series. It’s a winning program of Debussy, Schumann, Beethoven and Chopin. (Here’s a profile of Chopin Society director Dorata Lato.)

On Nov. 4, “From the Top” will do a taping at Emory University’s Emerson Concert Hall with talented young Atlantans as the performers. As usual, O’Riley will play his rock arrangements on the show.

On its Website, the Chopin Society’s Bozena U. Zaremba has a long interview with O’Riley:

Zaremba: You put an individual signature on the music industry by recording your own transcriptions of the music by rock artists such as Elliott Smith, Nick Drake and, most of all, the alternative rock group Radiohead. What do you try to achieve through these transcriptions?

O’Riley: First and foremost, it is to show what the piano is capable of doing. My favorite pieces are those that extend the coloristic and lyrical boundaries of the piano, so either emulating a human voice or a symphonic orchestra, a pipe organ or five-piece rock band; the mingling of voices and textures on the piano is also something that draws me to any piece that I interpret. And harmony — this great palette from which you can choose and which is instinctive to the piano. But basically what I’m trying to do is to play music that I love, and quite often the music that I love does not exist for the piano, and I have come to feel confident in making a version for the piano that I think is successful.

Zaremba: What attracts you to the music by Radiohead?

O’Riley: Initially, it was the compelling harmonic language and also the horizontal orientation of their music. Much pop music is very vertically oriented — it’s all about the beat and is all about a certain monolithic sound. On the other hand, the music of Radiohead, with each of its members contributing, has this richness of texture and a contrapuntal quality to it.