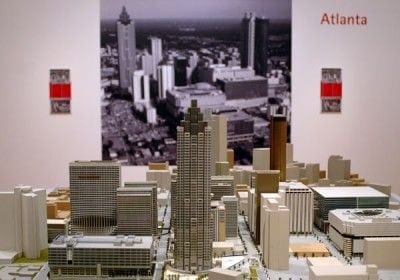 Review: A valentine to transformative Atlanta architect John Portman, at the High

You won’t see a red ribbon and bow wrapping the Anne Cox Chambers Wing of Atlanta’s High Museum of Art, but it’s there in spirit. The exhibition “John Portman: Art & Architecture” is a celebration of the renowned architect’s 60-some-year career and accomplishments.

There is plenty to celebrate. Few architects anywhere can claim his success as a hybrid designer-developer or at revolutionizing an industry, as he did with his concept of the atrium hotel.

The Atlantan has had a critical impact on this city. The 17-block Peachtree Center has been enormously important as an economic engine and a force for downtown redevelopment. Portman forged a global legacy using the design ideas he tested and introduced here.

One is his distinctive feng shui of light, greenery, water and dramatic spaces. The parabolic lobby of the Marriot Marquis Hotel, below, is the apogee of his dynamic interior spaces in Atlanta.

But there’s a point when celebration can become promotion. When the High touts artwork that would likely not be on its walls but for the architect’s signature, it has crossed that line. More about that later.

The architectural portion surveys career highlights. Peachtree Center gets due attention, as does Entelechy II, his Sea Island mega-villa. The most illuminating section, however, is devoted to the firm’s Asian practice.

A roomful of models and photos depicting the gigantic mixed-use developments built or under construction in China, South Korea and Singapore not only demonstrates Portman’s impact but also his canny prescience in seeking business in China in the early 1980s. Asia now accounts for 80 percent of the firm’s practice.

It’s a perfect match. Asian nations have the money, physical space and ambition to realize the grandest of Portman’s dreams. In turn, his iconic silhouettes of ever-taller skyscrapers and razzle-dazzle interior spaces embody his clients’ aspirations, progress and, now, their ascendancy.

It is also interesting to see a model for Il Porte Vecchio, a proposed waterfront rehabilitation project in Genoa, Italy, that was never built. A direct descendant of Entelechy II, it shares the flat-roof sunscreen supported by monumental columns, an organizing element alluding to Greek architecture, and its Mediterranean calm.

Entelechy II is the purest expression of Portman’s design philosophy, especially in the integral role of his artwork and furniture designs in his conception of a total environment. From that perspective, it makes sense to include examples of these paintings and sculptures in the show. A few would have made the point.

Instead, paintings and sculptures occupy both wedge galleries and the back third of the third-floor gallery. That is an awful lot of space to devote to pleasing but otherwise unremarkable paintings and derivative, often ungainly, sculptures.

By so doing, the museum has given the artwork a weight and validation it doesn’t merit. This flies in the face of a museum’s basic responsibility to make value judgments about quality. Questionable curatorial decisions like this not only mislead visitors but also undermine the museum’s credibility.

The High could have used that real estate to add the information one expects in a serious retrospective, historical context, say, or the evolution of his design principles. It could have taken the viewer from Brasilia, the capital of Brazil and Tivoli Gardens in Copenhagen to Frank Lloyd Wright’s holistic design and his first job designing department stores.

It could have shown that part of Portman’s genius was to knock modernism off its high horse and make it fun, and maybe allude to the cycles of popularity and antipathy through which he has determinedly kept his course. The exhibition succeeds as a scrapbook of a remarkable career, and that may have been all that the museum intended. But it could have been so much more.