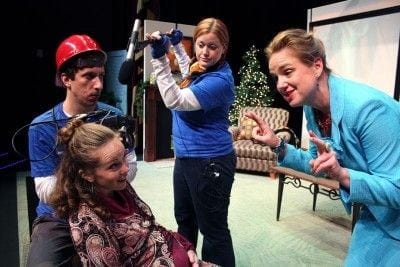 Anyone who has sold a house or watched HGTV is familiar with terms like “staging,” “curb appeal” and — thanks to the real estate bust — “short sale.”

Before heading off for the University of Texas’ graduate playwriting program, author Gabriel Dean worked in Atlanta real estate. That experience is apparently the inspiration for his “Buy My House … Please!” — a world premiere at Aurora Theatre in Lawrenceville that plays on the topicality of the foundering economy and America’s endless appetite for reality TV. The show runs through Nov. 1.

Dean posits a clever idea: that the buying and selling of real estate is just as phony and cosmetic and staged as reality television. Framed by a live video conceit that attempts to give on-the-air verisimilitude to the comedy, the story gets mired in hokey diversions about parental relationships and turns on a mystery so flimsy that it ends up being a major letdown. You can say this for Dean: He milks his joke for all it’s worth. But audiences will be all too aware that he’s straining to shore up a weak foundation and paint over his slipshod construction.

Ultimately, “Buy My House” is a nicely staged but poorly planned piece of property.

Here’s what happens: Tim Lark (Matthew Myers) has lost his job as an ad exec and gotten a job at Starbucks, while his pregnant wife Bryn (Bethany Ann Lind, middle photo) dreams of unloading their home and buying an extravagant place with a wine fridge. Seizing the opportunity for a free-advertising bonanza, their real estate agent — a ridiculously twitchy man played by Doyle Reynolds (top photo) — lands the couple on a prime-time reality show called “Buy My House…Please!” The series is lorded over by an imperious, back-stabbing hostess named Shelby Whitstone (LaLa Cochran), who is even more ambitious than the weaselly agent. She wishes that Tim were cuter, throws herself at Bryn’s father (the under-used Bart Hansard), and we see how shallow she is.

Directed by Susan G. Reid, the cast lurches along as best it can, given the clumsy writing. Reynolds is particularly silly as the agent who falls apart when he finally gets his big close-up. Cochran’s part could be juicier, and Hansard doesn’t even try to disguise the wooden lines of his wafer-thin role. All that said, Qayla Shipp (middle photo, with Lind), the youngest cast member, gives a sparkling turn as a fatherless little girl whose mother (Kristyl Dawn Tift) wants to buy the Larks’ home.

“Buy My House … Please!” rarely lives up to its zingy potential and too often feels a little like a first-draft for a graduate writing course. If new plays came with title insurance, you’d have a good case for a claim. Definitely not ready for prime time.