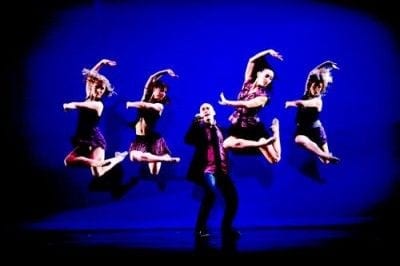 A couple of weeks ago, choreographer David Parsons gave me an interview for a story in the AJC. The story focuses on Parsons’ passionate response to what he felt was unfair criticism, how “Remember Me” breaks new ground for Parsons, and how the evening-length work has evolved since its New York premiere last January.

Parsons Dance and the East Village Opera Company perform the Atlanta premiere of “Remember Me” Friday (Oct. 23) at Georgia Tech’s Ferst Center for the Arts.

When we spoke, Parsons also recalled how “Remember Me” relates to his own history, going back to his signature solo, “Caught.”

Briefly described: Alone in a spotlight, a man stands in flowing white pants, bare-chested. He circles, arms and torso thrusting into strong lines, rippling through fluid, curved shapes. Blackness. A strobe flashes, and each flash reveals him suspended off the ground. Then, a repeat image of the same airborne figure seems to circle the stage, as if he’s sailing through the air.

The 1982 premiere of “Caught” snagged New York dance audiences’ attention. Two years later, Parsons set “Caught” on dancer Gary Chryst — plus a group work, “The Envelope” on Eliot Feld’s company — for a performance run at the Joyce Theater. The resulting critical attention helped launch Parsons’ career as a choreographer. By 1987, Parsons had left the Paul Taylor company and formed Parsons Dance Company. Over the years, he’s built the troupe into one of the most stable modern dance companies, known for accessibility and broad audience appeal.

Parsons’ work has been in town several other times at the Ferst Center and Georgia State University’s Rialto Center for the Arts, in “Aeros” performed by a group of Romanian gymnasts, and in 2006, when the Alvin Ailey American Dance Theater performed Parsons’ “Shining Star.”

When asked how “Caught” represents his work, and what it has in common with “Remember Me,” Parsons replied that he likes “air time,” and he’s fascinated with light.

“It’s my muse,” he explained. “It’s the fastest thing we know in the universe. It’s life for us humans — it’s beauty, it’s color, it’s the sun. It’s a never-ending source of inspiration for me.”

While making “Caught,” Parsons was working as a stunt model and with photographer Lois Greenfield. Rumor has it that the idea for using the strobe light was either Parsons’ or his lighting designer Howell Binkley’s — it depends on whom you ask.

Binkley also designed the complex digital lighting in “Remember Me.” Beyond Parsons’ highly physical dancing and emotionally charged story line, the visual effects should be stunning — with Binkley’s lighting and Jason Thompson’s projection scenery. Austin Scarlett of “Project Runway” has designed the costumes. As for the East Village Opera Company’s rock arias — some may disagree, but I’ll admit that while researching “Remember Me,” my iTunes account took a hit.

Paul Taylor’s influence is always visible — in clear-cut body shapes, in the athleticism, and in masterful use of spatial patterns. Think about it, how many Taylor dancers have carried on his legacy to the extent Parsons has? Whether or not you go for the flashiness of “Remember Me,” it’s worthwhile to see where Parsons is going — and where he’s taking Taylor’s legacy.