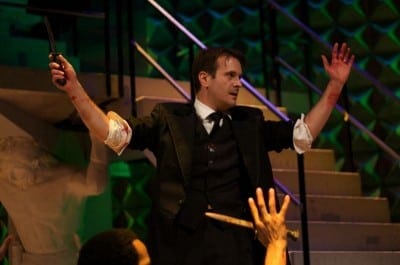 Georgia Shakespeare news: The 2010 season and the return of Shake at the Lake?

Richard Garner didn’t want to be specific — because that might jinx it. But Georgia Shakespeare‘s producing artistic director opened his elegant new production of “Julius Caesar” the other night by dropping strong hints that the theater’s popular Shake at the Lake will return in 2010.

The al fresco entertainment on the dock of Lake Clara Meer in Piedmont Park — Atlanta’s central park — was canceled this year after the economy tanked and funding tightened. “We’ll announce what’s going on with Shake at the Lake in early February,” publicist Stacey Colosa Lucas said in a follow-up email. (Photos are by Jennifer Hofstetter from “Julius Ceasar.” Top: Joe Knezevich as conspirator Cassius, addressing the mob. Below: Knezevich and Neal A. Ghant as Brutus, looking dapper before the deed.)

Meanwhile, the Oglethorpe University-based ensemble has early details of next year’s lineup, which will include a couple of world premieres and the return of a box-office smash.

And not to be overlooked: A new adaptation of T.H. White’s “The Sword in the Stone,” for the Family Classics Series, and the world premiere of “Prophets,” by Atlanta actor and writer Brad Sherrill. “Prophets,” focusing on the lives of the Old Testament’s Isaiah and Jeremiah, is a one-man show in the vein of Sherrill’s “The Gospel of John,” which has played to strong notices and toured internationally. “Prophets” and “Gospel” will run in repertory and kick off the season in March.

Meanwhile, it’s not too late to catch “Julius Caesar,” which continues through Nov. 1 and which I reviewed for the AJC.