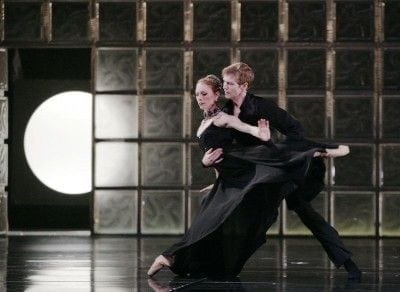 Opening Atlanta Ballet’s 80th season, Mark Godden’s “The Magic Flute” offered just the right challenge to the company’s bold, responsive dancers at the Cobb Energy Performing Arts Centre. Godden’s broad-sweeping choreography evoked an adventurous, expansive quality from this accomplished group of professional dancers. The trouble was that he tried to pack too much plot into the ballet.

Choreographed in 2003, “The Magic Flute” was Godden’s second full-length ballet. Drawing loosely from Ingmar Bergman’s 1970s film version, the ballet’s premise is built around a modern dysfunctional family. Issues of addiction, child custody, lust, jealousy and infidelity are as relevant today as they were during the 18th century when Mozart composed the opera.

But such issues are inherently complex and difficult to communicate through purely physical means — and here the program notes, more than the dance, were essential to understanding plot and motivation. (Atlanta Ballet originally scheduled this “Flute” for Spring 2010, but artistic director John McFall had to move the production to October when he belatedly learned the Atlanta Opera was doing its own production of the Mozart classic.)

There’s the young Prince Tamino (Christian Clark), who is addicted to television, distracted from finding his purpose in life. He falls in love with Pamina (Nadia Mara), who feels torn between her quarreling parents but craves independence. (First and third pictures: Clark and Mara. Photos by Charlie McCullers.)

Pamina’s father, Sarastro (Joshua Reynolds), has kidnapped Pamina from her mother, the Queen of the Night (Christine Winkler), in order to educate her as he thinks best, but the jealous queen eventually tries to manipulate Pamina into killing Sarastro. Sarastro’s disciple Monostatos (Nathan Griswold) is jealous of Pamina’s sharp intellect but also lusts after her. And bird-catcher Papageno, a sort of Holy Fool who is aiding Tamino, must learn to control his wandering eye in order to get back together with his perfect mate, Papagena (Tara Lee). There’s a lot going on.
Even if the choreography did not communicate the entire story on its own, the dancers’ sheer joy in moving so boldly, broadly and openly translated with absolute clarity. Unlike traditional classic ballets, where scenery occupies much of the stage and choreography emphasize the vertical line, Godden’s style sweeps across the horizontal — enveloping, penetrating, swirling. And because there was no scenery in the first act, pure movement had to fill the entire empty stage. As the colorfully clad dancers traversed the stage, their movement sang, never hinting at the physical demands or stamina required.

Godden’s partnering sequences translated beautifully. In a duet between Christine Winkler and Christian Clark, Winkler cleverly manipulates the young man into falling under her power. Then Winkler subtly turns his attention to Pamina’s image. Later, in a pas de deux between Tamino and Pamina, the two skillfully toss and catch a white feather, symbolizing the purity of love. Bounding from one lift to another, their coupling is as lofty as their true love.

Some of the visual gags worked, while others came off as if they were thrown in merely for laughs, not fully integrated into the story structure. As I watched these dancers — the skill and gusto they brought to the choreography, dancing to Mozart’s music — I wanted to set them free from complexity of story line and from visual distraction. I wonder what Godden choreographed after he made this ballet. Perhaps this intricate story challenged him to take his craft to a new level.