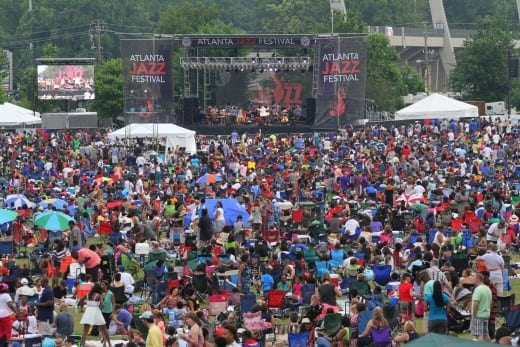 The Atlanta Jazz Festival is the largest free jazz festival in the world.

Breaking news: The Atlanta Jazz Festival postponed until later in the year

The 43rd annual Atlanta Jazz Festival, scheduled for Memorial Day weekend at Piedmont Park, is officially postponed until later in the year due to the Covid-19 pandemic.

Also postponed are the 31 Days of Jazz series of concerts that have traditionally led up to the festival. Instead, the city will present the Atlanta Jazz Festival Sessions that will feature a curated series of Atlanta jazz artists performing online via the jazz festival’s social media. Details for that series will be announced later.

The annual festival, one of the largest jazz gatherings in the country, is Atlanta’s unofficial gateway to summer. A specific date is still up in the air because of uncertainty about the course of the pandemic and when it will be considered safe to have large gatherings again.

“This was a very challenging decision as the Atlanta Jazz Festival is a time-honored and treasured tradition,” Camille Love, executive director of the Mayor’s Office of Cultural Affairs, said in a press release. “While Memorial Day weekend falls beyond the shelter-in-place time frame, large gatherings are still being discouraged. With 150,000 people typically attending our event in Piedmont Park, we thought it best to find other dates later in the year.”

The festival has also canceled the May 22 India.Arie concert and the May 23 Late Night Jazz Jam featuring the Irreversible Entanglements. The festival was scheduled to take place May 23–24 with a lineup headlined by legendary bassist Ron Carter, Archie Shepp, Jazzmeia Horn and Sean Jones.