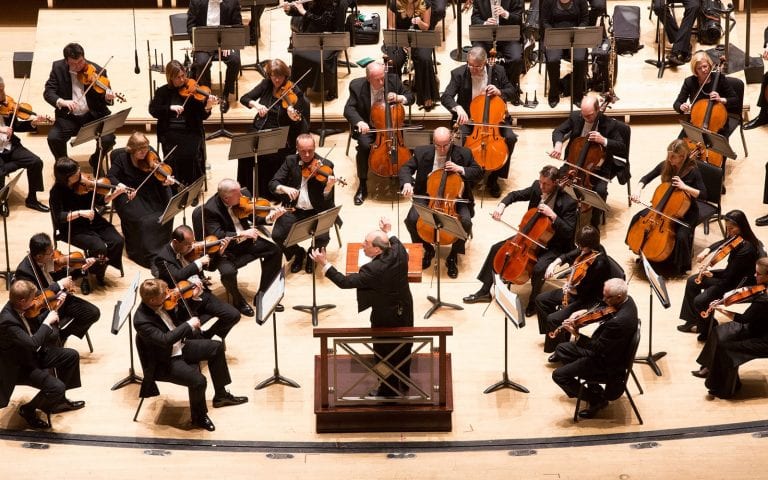 The Atlanta Symphony Orchestra has canceled its remaining 2019-20 performances, but has expanded its streaming offerings. (Photo by Jeff Roffman)

The Atlanta Symphony Orchestra has launched an expanded version of the ASO Virtual Stage streaming service that will include free archival performances, on-demand recorded concerts, original videos and interviews, plus educational programs.

Last week, the symphony formally canceled the remaining performances in its 2019–20 season due to the Covid-19 pandemic, and announced a loss of $3 million in ticket sales. The symphony has reduced administrative salaries, furloughed employees and launched a fundraising drive.

The union that represents the musicians agreed to an amended contract with a reduction in pay that allows the ASO to stream past performances from its archives.

“We are inspired by musicians around the world who are virtually sharing messages of hope and inspiration during these challenging times,” said ASO vice president and general manager Sameed Afghani, who oversees the ASO Virtual Stage. “The circumstances have fueled a tremendous amount of creativity from members of the ASO family. We are thrilled to continue to share our music with people across the Atlanta and around the world through this new portal.”

At 8 p.m. each Thursday, the ASO will host a free listening/watch party via the ASO Virtual Stage. The schedule so far:

— April 30: The Morehouse College Glee Club with the ASO.

— May 14: An archival concert of “Everything Lasts Forever,” the work composed by ASO bassist Michael Kurth that was inspired by graffiti on the Krog Street Tunnel. The performance was led by ASO Music Director Robert Spano with the Atlanta Symphony Orchestra Chorus and mezzo-soprano Kelley O’Connor.

Also available are short videos that introduce viewers to individual musicians in the orchestra as they discuss their concert preparation and the backstories of the instruments they play.