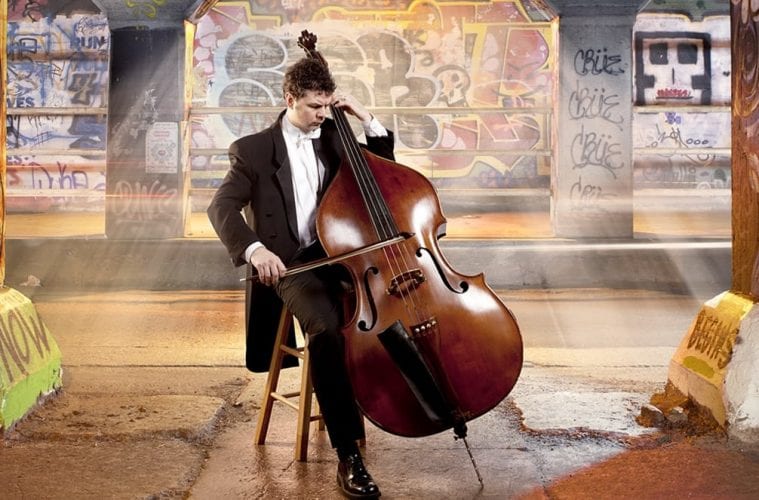 After the Atlanta Symphony Orchestra performed Michael Kurth’s “A Thousand Words” at the University of Georgia in 2016, ASO Music Director Robert Spano called Kurth up from the audience to join him for a bow.

Kurth, who has spent 24 years as an ASO bassist, is more comfortable on the bandstand but likes to sit in the crowd when one of his compositions is performed. As they soaked up the applause, Spano turned to Kurth and said, “We should do a whole CD of your stuff.” Kurth was so flummoxed that he didn’t immediately respond, so Spano asked, “Don’t you think that’s a good idea?” Kurth began to fear Spano might change his mind, so he finally blurted out an affirmative response. “It was apparently something that had just occurred to him at that moment,” Kurth says. “He’s a little impulsive, and I’m grateful for that. It’s just a stunning thing when someone offers you something like that. It’s hard to react.”

Now, three years after that fateful evening, the ASO has released Everything Lasts Forever (ASO Media), an album of Kurth’s music conducted by Spano that features mezzo-soprano Kelley O’Connor and the Atlanta Symphony Orchestra Chamber Chorus.

The disc features four of Kurth’s works: “Everything Lasts Forever,” “A Thousand Words,” “May Cause Dizziness” and “Miserere.” They were all featured during the ASO’s 2017–18 season leading up to the recording session. The performances were viewed as trial runs, and inspired revisions to all the pieces. “All the things on the CD had revisions after their premiere,” Kurth says. “You make adjustments. You have to. But it’s like, when is a painting done? How many layers is Rembrandt going to put on the thing? At a certain point, you have to let go.” Kurth was born in Virginia and took up the bass in the fourth grade. One of his early inspirations was Donald “Duck” Dunn of Booker T. & The MGs, the Stax Records studio band that backed up Otis Redding, Wilson Pickett and Sam and Dave. “When I first got a bass guitar, the Blues Brothers soundtrack was stuff I learned to play by ear,” he says.

Dunn’s approach helped inform Kurth’s playing. “I enjoy the role of the bass; I like being in the back,” he says. “In almost every genre of music in the world, the bass provides the harmonic and rhythmic foundation. It’s like the sidewalk the main character walks on. If there’s no sidewalk, the character is going to go astray or fall off the cliff. If there’s a sidewalk, he’s got a path.”

Kurth graduated from the Peabody Conservatory and joined the ASO in 1994. His first orchestral piece for the ASO was a fanfare called “May Cause Dizziness” that debuted in 2011.

At the time, Spano and principal guest conductor Donald Runnicles were about to celebrate their 10th anniversary with the orchestra, and commissioned 10 fanfares from favored composers. As that happened, Kurth purchased a software package designed to aid in composing and decided to write a fanfare so he could play with the software and learn how to use it.

Kurth played his fanfare for Evans Mirageas, the ASO’s artistic administrator, who not only liked it but promised to reserve it as a substitute if any of the 10 commissioned pieces failed to materialize. One composer didn’t meet his deadline, and once Spano heard “May Cause Dizziness,” he commissioned a longer work from Kurth that turned into “Everything Lasts Forever.” The composer’s daily commute took him by the Krog Street tunnel, and he took inspiration from the graffiti he saw there. The first movement, “Toes,” was inspired by the moniker of street artist Harrison Keys. That piece debuted in 2013, followed by an even longer work, “A Thousand Words,” that debuted in 2016, and “Miserere,” which featured the orchestra’s chamber chorus. All four works are performed on the CD.

A new Kurth piece — Sonata for English Horn and Piano — will be debuted Friday night at the Schwartz Center for Performing Arts by the ASO’s Emily Brebach and pianist Tim Whitehead.

Just as not all dancers choreograph, not all classical musicians compose. Many prefer to be the canvas through which others create. But Kurth feels driven to write his own music. “Composing is like that spackle I fill the crack with,” he says. “It’s just the language I happen to speak. It’s where I itch. I’ve often compared it to when you have to sneeze. You can’t not sneeze. The urge arises, and the sneeze happens.”