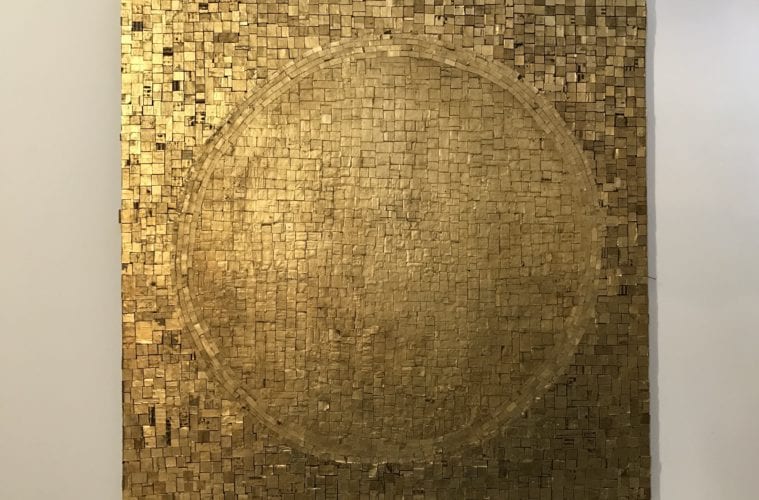 Reliquary for All Those Words (2018–19) by Donna Mintz is made of oil, collage, found and personal papers, composition gold leaf and mineral pigment on canvas. (All images courtesy of Sandler Hudson Gallery and the artist)

The stunning gold-leafed spectacle and deeply poetic work in Donna Mintz’s Ex Astris, at Sandler Hudson Gallery through May 4, recalls great moments of art history. These range from Gustav Klimt’s early-20th-century paintings all the way back to the so-called gold of ancient Troy (3,000 B.C.) discovered by Heinrich Schliemann just in time to inspire Klimt’s archaeologically informed background details.

As the titles of Mintz’s paintings and wall-mounted sculptures suggest, we might also remember golden medieval reliquaries holding objects associated with a saint, or the Byzantine mosaics in Ravenna that inspired Ezra Pound to write, “In the gloom, the gold / gathers the light against it.” 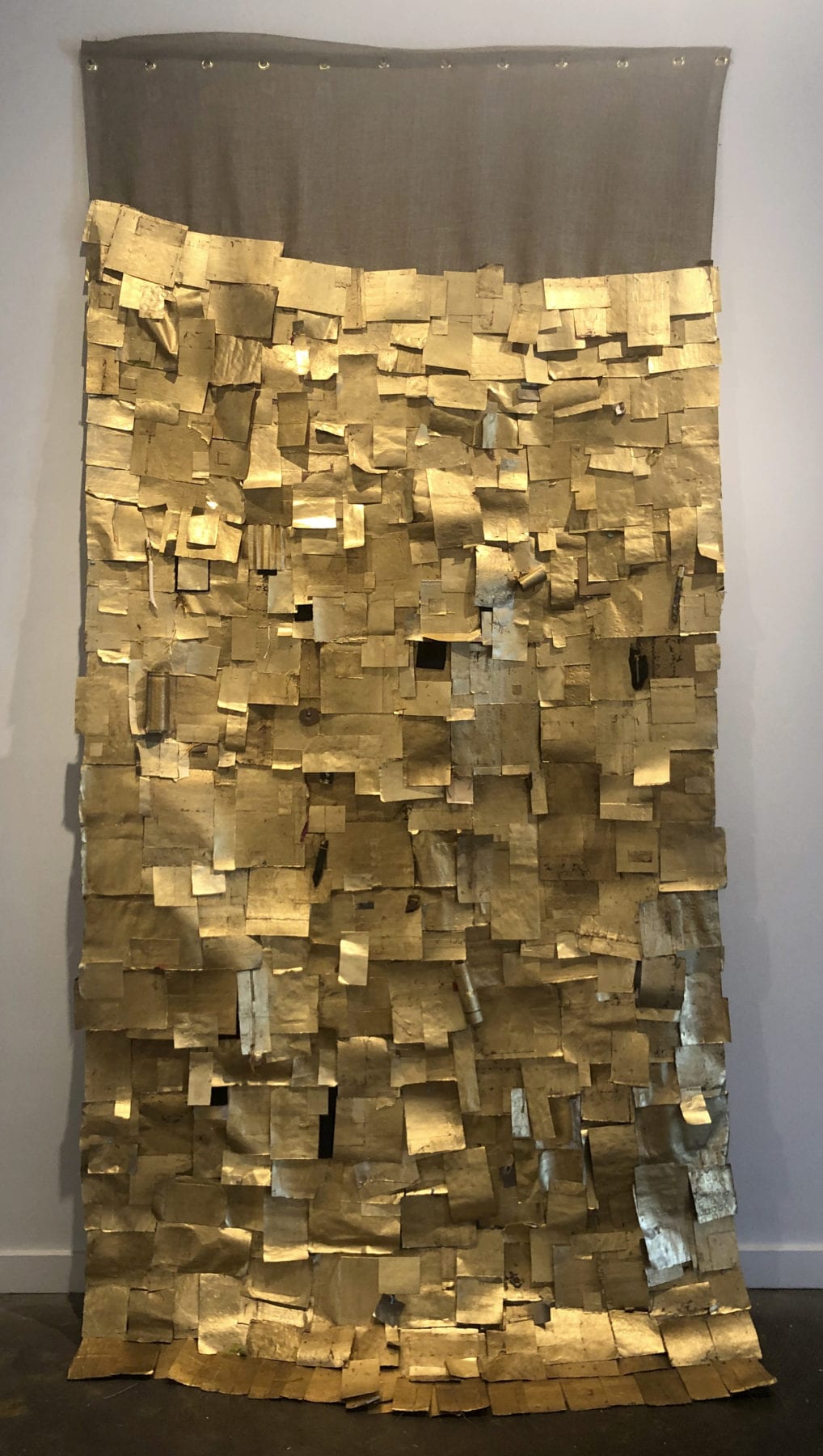 On the other hand, the exhibition is thoroughly contemporary. Its title (Latin for “from the stars”) refers to the now-modified hypothesis that Earth’s heavy elements had their birth in the heart of exploding stars.

The assemblage Nothing Gold Can Stay resembles contemporary African artist El Anatsui’s transformations of valueless objects into grid-based works of beauty, but in Mintz’s case, the rectangles of paper that hold notes, lists and first-draft copies of manuscripts have been covered with gold leaf and turned into objects of value in varied ways.

The work’s title, from a Robert Frost poem, aptly captures how this show takes the ephemeral written words we use to record fragile memories and encases them in a medium associated with honor and permanence. A similarly gold-leafed work on a surface made from recycled manuscripts is titled Reliquary for All Those Words.

Bird-and-flower-silk embroidery covered with gold and silver leaf maintain the flavor of an elegantly presented past. This deliberately understated sumptuousness is anything but luxury for luxury’s sake.

Mintz’s larger point is that we maintain the value of past experiences and retain fragile memories both through lasting works of visual art and words that evoke reverential awe, words often written on random scraps of paper. This exhibition honors the latter mode of creation and preservation by establishing an artistic vehicle that turns fragments into near-sacred objects. 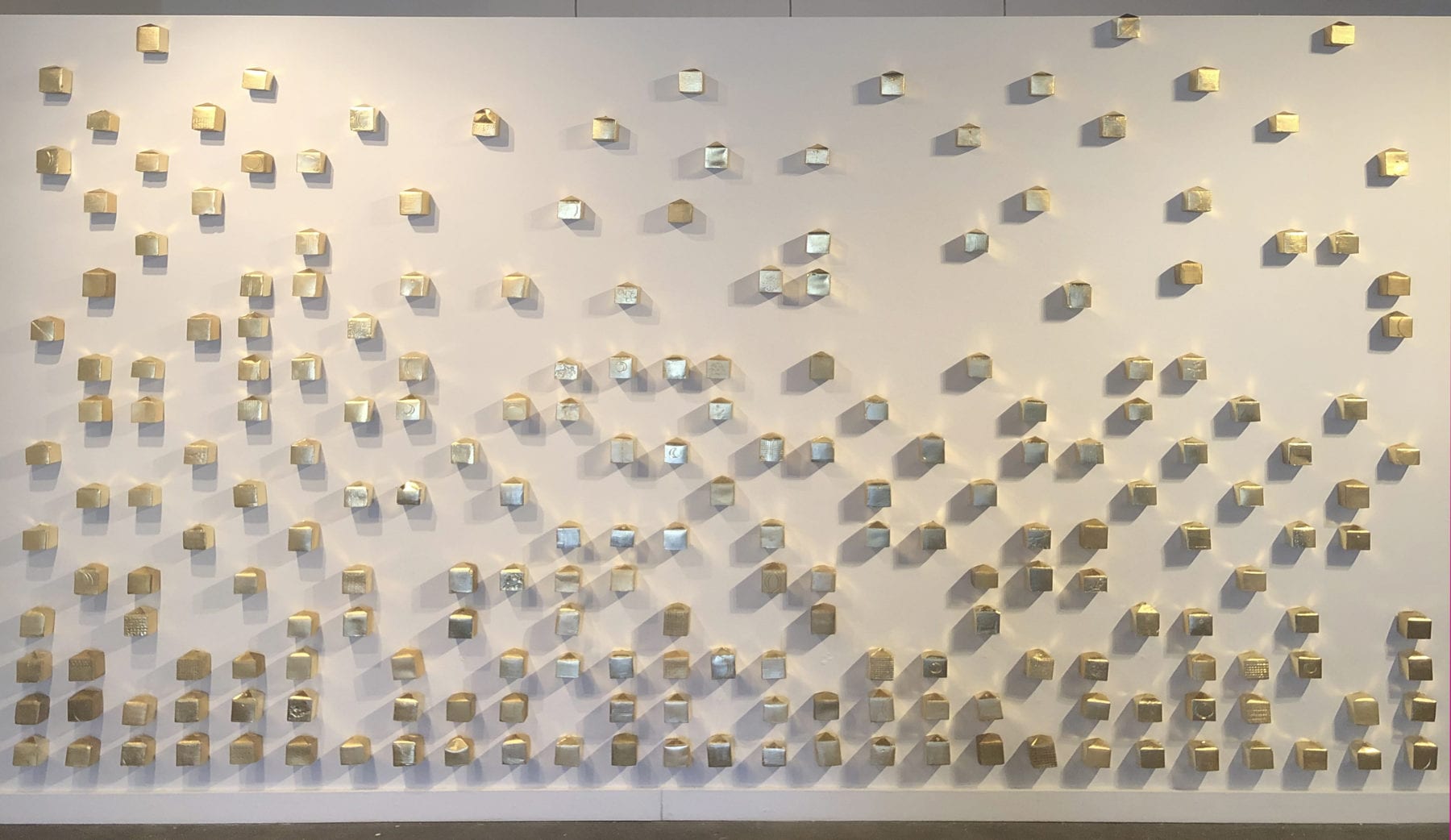 The 207 little sculptures mounted across an entire wall in Reliquary exemplify this marriage of the humble with the elevated even in how they’re made. Mintz cast them in plaster in molds made from elementary-school milk cartons and embedded a found object of visual or personal significance in each one, just as a religious relic is encased in a jeweled or golden container. The mineral pigment and composition gold leaf that cover the plaster surface complete the transformation of the mundane into the extraordinary.

The dazzling impact of this exhibition is amplified by the subtlety and variety of the work. The combination of grid and spiral in Reliquary for Blue Sky is echoed by — but not repeated in — the circular pattern that dominates Reliquary for All Those Words.

The superficially similar Reliquary for a Grey Painting proves, on closer inspection, quite dissimilar. The works incorporating embroidery are based on different principles. Mintz’s surfaces, likewise, are filled with a wide range of intriguing textures that don’t reveal themselves at a casual glance. The show is filled with visual rewards that intensify with a longer look. 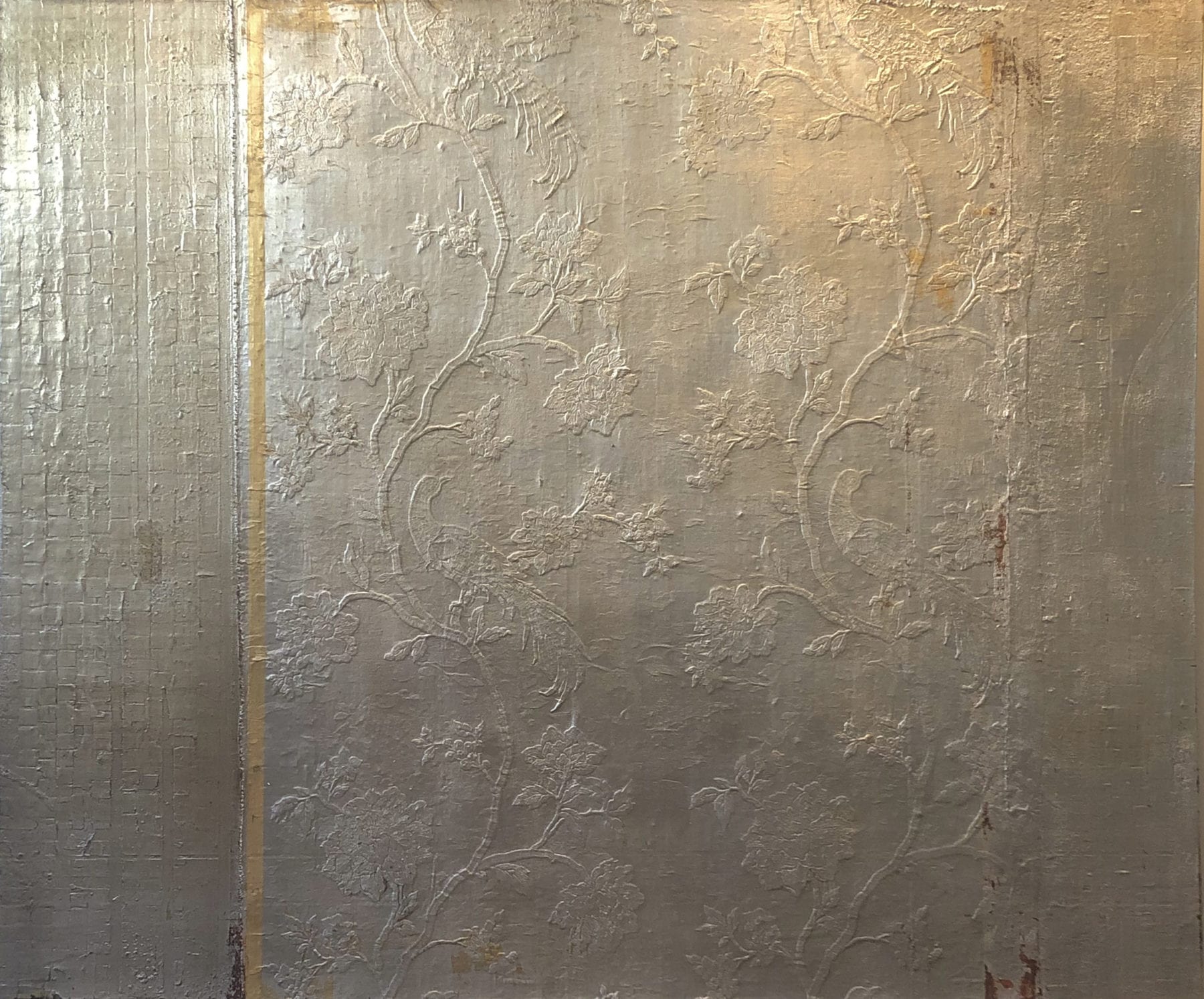 “Examination” is not quite the right word, although close looking is certainly involved. “Contemplation” is better, because this is a thoroughly contemplative exhibition that encourages quiet personal involvement more than detached analysis.

Though it’s far from obvious, these works also incorporate Mintz’s longstanding fascination with Southern geography. In some pieces, the star-generated gold encases a different sort of relic, thin layers of the red and white clays of parts of the South that once were prehistoric seabed. (The materials buried beneath the glittering surface of Where the Sea Used to Be allow her to “date this painting to 70 million years ago,” she notes.)

Sensuous in the extreme, Ex Astris is also exceptionally intellectual. This combination is part of what makes it such a high point in this exhibition season.