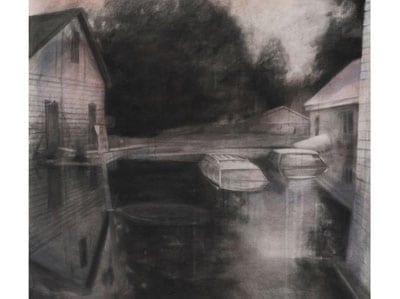 Catastrophe is the theme of Manifestation internationale d’art de Québec, Manif d’art 5, Québec City’s upcoming art biennial. But the citywide exhibit is definitely a boon to Atlanta artists Sarah Emerson and Katherine Taylor. Curator Sylvie Fortin, the editor in chief of Atlanta-based Art Papers magazine, has included them in the event, which will run May 1 through June 15.

Fortin intends to explore catastrophe in its various manifestations, from catalcysmic events to the subtler “shadow of the permanent threat of catastrophe.” These two artists, both trained in Atlanta, fit the bill. Emerson creates a world whose Bambi innocence belies the strange doings that take place therein. Taylor often limns a landscape laid waste by weather — Atlanta’s floods in her most recent work. Her paintings are sourced from newspaper or television images, which often neutralize the emotional impact of their subject. You might say she depicts the banality of natural disaster.

Emerson, 36, will contribute a site-specific silhouette tableau on windows of Québec City’s Museum of Civilization, as well as a temporary mural, location yet to be determined, that reprises the locusts that swarmed in her discomfiting recent show at her Atlanta gallery, Whitespace.

Both artists consider Manif an important opportunity. “Sylvie’s been really supportive,” Emerson says. “She encouraged me to stretch.”

Although she has shown abroad, Emerson says this is her most important show thus far, because she will be exhibiting in the context of internationally recognized artists. Taylor, who is represented by Marcia Wood Gallery, is also excited by the prospect of a new platform. An artist who tends to lose herself in her work, the 44-year-old painter says, “It’s also made me think about my work differently, to think about its value outside of the studio.”