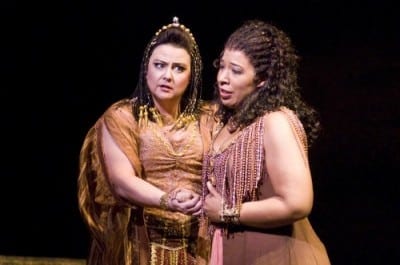 Billed as the star of the Atlanta Opera‘s “Aida,” soprano Mary Elizabeth Williams was scheduled to make her debut in the title role Saturday, but had to cancel with a sinus infection. In her place, veteran Aida soprano Indra Thomas sang it opening night, which was reviewed here.

Williams received a doctor’s OK during the day Tuesday — “antibiotics and steroids are wonderful things,” a physician familiar with the case told me — and she sang the role that evening. But her voice didn’t sound 100 percent, and too detailed a description would seem unjustly definitive. Her sound flows easily, and she sculpted phrases with intelligence and emotion. We can guess that the wide, slightly unstable wobble and sandpapery tone were lingering effects of her illness. I hope to hear her again when she’s in ideal voice. (Top photo: Mezzo Elizabeth Bishop, as Amneris, and Williams as Aida. Photos by Tim Wilkerson) As an actress — physically and vocally — Williams was often riveting. There’s a pivotal scene with baritone Mark Delavan, playing her father Amonasro, the King of Ethiopia. To win his battle against the Egyptians, he needs for his daughter to get secret information.

So Amonasro uses emotional blackmail — “Your dead mother is cursing you!” — to break her spirit. Williams played it to the full — absorbing his taunts, then shattered at her father’s disapproval and desperately, pathetically, pleading for his forgiveness. In the course of a few believable moments, this regal young woman wilted and appeared the humbled child. Directed by Trevore Ross, it was a masterful scene, the emotional highlight of the evening.

Williams is scheduled to finish the run of “Aida” Friday night and Sunday afternoon. Perhaps if there’s a lesson learned, it’s just how difficult it is to sing these epic Verdi roles, requiring a balance of emotional maturity and vocal artistry and sheer athleticism. Listeners out there who heard her Tuesday and will attend one of the final performances are invited to share their comparisons on her singing.