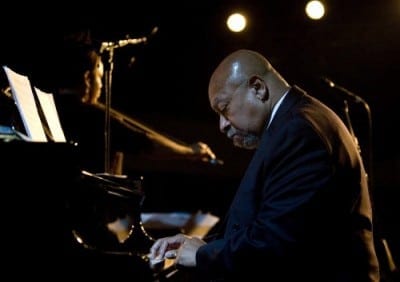 At their best, jazz festivals gather a roster of international talent for a weekend of musicmaking, creating a crucible for collaborations among musicians who don’t normally play together.

In this spirit, the Ferst Center for the Arts at Georgia Tech hosted mainstays from California’s Monterey Jazz Festival on Saturday night. As a touring group, they last stopped in Atlanta two years ago (at Symphony Hall) with a sextet featuring pianist Benny Green and saxophonist James Moody. It was a celebration of Monterey’s 50th anniversary. The artists created a festival experience by breaking out into different configurations, creating multiple concerts within the main event. But the huge size of Symphony Hall and the physical distance between the musicians and audience muted the energy of the evening’s performances. The group played a number of tunes en masse, including Barron’s compositions “Calypso” and “Theme #1.” But the most compelling songs were performed by pieces of the whole. Barron, a thoughtful and considerate accompanist, backed up Elling on “You Are Too Beautiful” in a quartet setting, then laced a piano trio with breakneck runs and a commanding sound. Malone’s solo version of the Jackson 5’s “I’ll Be There” started with impressionistic, finger-style phrases that evolved to bebop acrobatics. Giddy applause rang out for Carter and Barron from the very first notes of their “Georgia on My Mind/Amazing Grace” duet. For me, Elling (at left) was the standout in an evening stacked with inspiring musical talent. The singer scatted on a vocalese version of Thelonious Monk’s “Rhythm A Ning” — a spry, fun melody. His solo, initiated by a staccato chord from the piano, began with a carefully thought out series of boops and bops. As he warmed into the improvisation, creating nonsense phrases that sounded only a few degrees removed from English, Elling elongated vowels and changed rhythms. He moved from quarter notes into sixteenth-note runs, his body twisting and turning, and finished with full-bodied falsetto statements, sweat visible on his forehead.

Like Elling, the other artists loaded each tune with intense musicality. Barron and company were at the tail end of the first part of a 36-show tour and could easily have phoned in a performance. They chose, however, to forge a connection with the music and the audience, bringing the best elements of a world-class music festival to Atlanta.