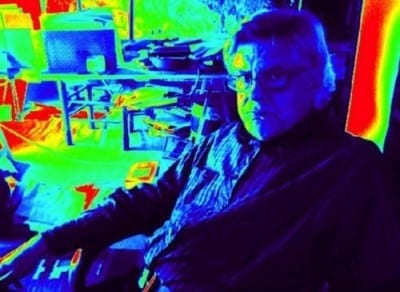 Bent Frequency has been seeking out classical music’s theatrically comic and absurdist edge. The band recently paired up with Frequent Small Meals, an organization devoted to rare or weird cinema, for two film-music shows devoted to Argentine composer-filmmaker Mauricio Kagel.

This Monday at 7:30 p.m., Bent Frequency offers a free concert of music by Georges Aperghis (below).

Like his early mentor Iannis Xenakis, Aperghis was born in Greece, moved to France as a young adult and joined the powerful avant-garde movement. He describes his approach as “faire musique de tout” — make music from everything — and he means it. You can hear some of his music and watch video performances on his Web site.

A scene from Aperghis' "Machinations," performed in Paris, 2008.

In a beautiful 1989 made-for-French-TV movie called “Enumérations,” Aperghis set up a bunch of actors in a decrepit house and had them make wordless ambient music from daily life: a leaky faucet, tearing up pieces of paper, footsteps, chairs scratching against the floor and everything else that, repeated carefully and listened to patiently, sounded like music of the everyday world. (I write this from a hazy memory; someone please correct me if I’ve got these details wrong. Meanwhile, I’ll wait for the Fox network to commission a made-for-TV art film from David Lang.)

At Monday’s concert, individual members of the Bent Frequency ensemble will perform “Graffitis” for solo percussion and “Simata” for prepared piano and electronics. As a group they’ll play “La nuit en tête,” described as “a chamber work with fleeting and provocative evocations of nocturnal longings.” The main event will be New York-based soprano Haleh Abghari singing what is likely Aperghis’ most-performed — or at least most-talked-about — work, “Récitations for Solo Voice,” which was first staged as a monodrama in 1982. There’s a scary-good recording of it on the Naïve label, but I’ve never heard it performed live. In essence, it’s a cabaret showpiece for a singing actress, and in spirit is perhaps a successor to Schoenberg’s gorgeously dark “Pierrot Lunaire.” In “Récitations,” the singer misappropriates words and expressions, repeats them, jangles them, reorders them, breaks apart syllables and creates music of pure language, where new and often comic, or bittersweet, meanings come out of the mix. She must be a storyteller of the absurd. Much or all of the music is mathematically structured, which gives it a sense of architectural unity. I’m assuming Abghari will sing it in French. If someone alerts Alliance Française, the show should be packed.