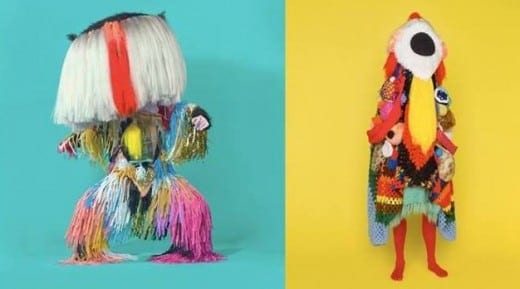 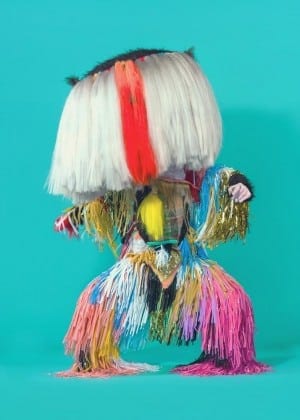 Costume designed by Branden Collins and Madeline Moore, from the video Communications. Courtesy Brian Smith and the artist.

Gender, typically classified by science as a function of biology, is slowly inching its way toward much broader subjective definitions.

Just this year, India, a country that still outlaws gay sex, has legally recognized what is commonly referred to as the “third gender,” a generic category for those who don’t neatly fit within the male/female binary.

In 2011, Germany announced that it would allow parents to register newborns as gender indeterminate.

In Australia, it is now an option to select “intersex” on official passport documents. Pakistan, Nepal and Iran, among others (but not the United States), offer similar official recognition.

Despite variations on the theme of gender existing across time and geographies — for example, various transgendered, intersex or cross-dressing groups such as the hijras in South Asia, kathoeys in Thailand, and muxes in Mexico — the progression toward broader acceptance is stymied by a labyrinth of deeply imbedded cultural systems. Among the largest is language, which tends to cater to and preserve the dominant culture.

If androgyny describes a combination of male and female characteristics (from the Greek, anér, andr-, meaning man, and gunē, gyné, meaning woman), then pandrogeny broadens the scope even further, suggesting a more nuanced spectrum of sexes.

The main attraction (if you missed opening night) is a collection of eight elaborately crafted costumed figures, each unique in name (Catacomb, Lightening Bolt, Jungle, Jarawa, for example) as well as personality and adornment. 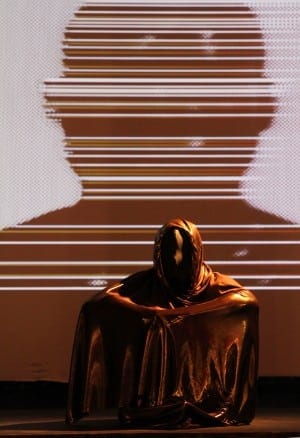 Collins, a designer at Cartoon Network and Adult Swim, runs his own interdisciplinary studio, The Young Never Sleep, which is a slick and smart entrepreneurial venture showcasing his myriad talents.

He works with a handful of enthusiastic coconspiring artists. San Francisco–based textile artist Madeline Moore and artist Zaneta Hodari worked on some of the figures, while another was included in a Shadow Mix music video directed by Chris Golden.

The costumes are displayed on life-size mannequins. They exude a strong human presence that is both playful and ritualistic, something like Maurice Sendak by way of West African masquerade. Exaggerated overtones of the worldly and ceremonial make them alien, enticing, beautiful and unsettling.

Like with the most pleasurable forms of culture shock, you can’t stop looking.

Culture shock seems to be the point, albeit indirectly. Collins, with his sharp and delicate eye, reminds his audiences there are infinite interpretations of “human,” and what seems otherworldly and exotic to some is quite normal, natural and beautiful to others.

Collins’ emphasis of gender ambiguity is an idea that gradually accumulates as you move throughout the exhibition. It’s apparent but not explicit in his figures, in which potential signifiers of gender — facial and pubic hair, references to the phallic or vaginal — coexist indiscriminately, so that they are abstractions of gender.

References to Nick Cave’s “Soundsuits,” or the photography of indigenous peoples by Charles Fréger (whose book Collins has on display) or Phyllis Galembo, who makes photographs of complex West African ceremonial traditions, are unavoidable, and some of Collins’ figures bear too close a resemblance to those artists’ work to stand on their own as his original creations.

The artist’s fashion sense is also clear, and he displays a predilection for hybridization similar to the co-opting of indigenous traditions seen on runways. The faceless figures call to mind fashion designer sketches that emphasize the outfit above the identity of the person wearing it. Their facelessness exists presumably to deemphasize any specific gender, but there’s also something sad about their anonymity. One wants to know who these beauties are.

The one-night performance, however, was the antidotal inverse to that. On opening night, Collins took the stage, first as a masked mannequin sitting Indian style on a raised platform at the rear of the gallery. As the performance commenced, Collins, almost nude, appeared to be born from the loins of his own exhibit. Awkwardly outstretching his legs as if learning to stand for the first time, he bore no inkling of self-awareness. As the music shifted from electronic down beats to soulful blues, Collins’ beginner moves turned to self-knowing gyrations of the hips and nodding of the head. 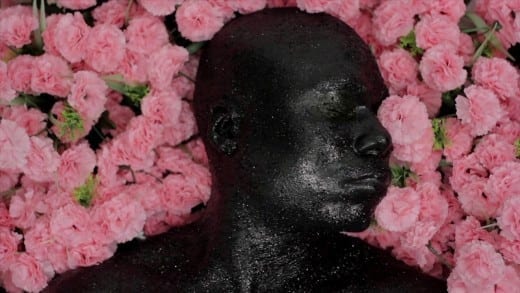 Displayed on the outer gallery walls is a suite of photographic portraits and videos that also served as the backdrop to the performance. The highly produced videos show Collins in a variety of poetic vignettes — unnaturally harnessed in a suit and tie, naked before a white backdrop in a Mapplethorpe-like composition, covered in black soot atop a bed of pink roses. The photographic portraits are equally stunning, presenting crosscultural hybrids similar to his costumed sculptures.

Adjacent to the main exhibition space is a pop-up gallery shop, which also functions as an installation piece. A time capsule of the artist’s youth, there’s exactly one of each item on display, some of them actually for sale.

Collins’ emphasis on sex in his pop-up bookstore installation is more innocuous — almost endearing — than it is shocking or scandalous because it’s framed within the larger context of coming-of-age curiosity and inquiry. Similar to Rashid Johnson’s wall pieces made of Al Green records, physics books, shea butter, CB radios, etc., Collins’ collection of items reads as a contemporary formation of identity that’s not rooted in a single uniform narrative of race or gender but rather the sum of an intricate cross-section of identity-shaping influences.

Whether intentional or not, Pandrogeny translates as largely autobiographical, not only because Collins is the leading character in much of his works, but also because the figures he’s crafted come across as surrogate extensions of his own experience. The show feels like a rite of passage, or like Collins has finally been able to say the very thing he’s wanted to say for quite some time — and all at once.