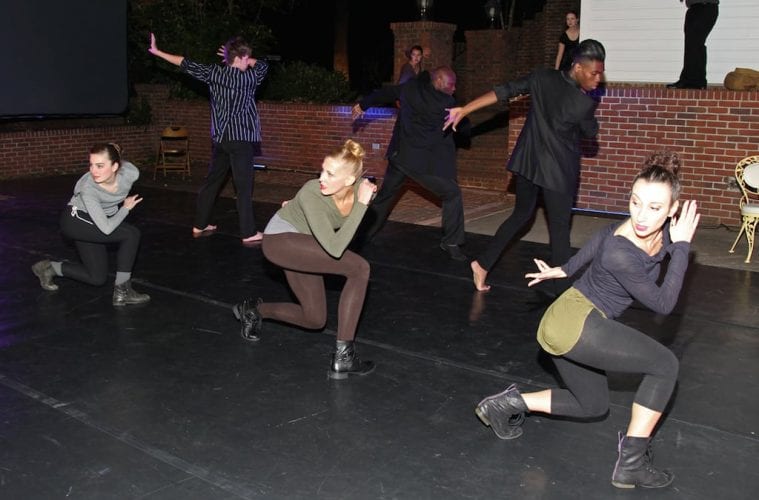 The Proia Dance Project will debut at Callanwolde. (Photos by Kimberly Link)

The wine was flowing on a recent evening at Marietta’s historic Ivy Grove mansion when Proia Dance Project and Atlanta Fine Homes Sotheby’s International Realty presented Sunset at Ivy Grove, a performance debut and benefit for the fledgling dance company and for the proposed new arts and entertainment venue, TranscenDANCE.

Both Proia Dance Project and TranscenDANCE reflect artistic director Alexandre Proia’s vision for creating high-caliber, accessible dance and multimedia works, while fostering collaboration and conversation across arts disciplines via the Internet and live performance. Proia Dance Project, the nonprofit entity, will serve as a laboratory for new choreography. TranscenDANCE, a for-profit venture currently in fundraising stages, would offer classes, workshops and outreach programs by day; in the evenings, it would be a trendy food and drink establishment where dance, music, theater and magic arts would be performed as part of a “total sensorial multimedia experience.”

It’s hard to say whether Marietta, a suburban city with a small-town feel, is ready for the concept. But the turnout at Ivy Grove showed strong enthusiasm. A warm glow illuminated rooms of the antebellum home, decorated with fresh flowers, candlelight and French antiques. A well-heeled crowd, described by board member William Bodnar as Marietta’s movers and shakers, filled the living and dining areas with lively conversation while a violinist and cellist played baroque and classical music.

Dancers were scattered among the guests; when asked what’s special about Proia, they said without hesitation, “His class.”

They’re not talking about the way the six-foot-two dancer passes from room to room, stoking the ambiance with his seasoned good looks, panache born of Paris and style cultivated among Manhattan’s artistic elite. Some of Atlanta’s finest professional dancers are talking about Proia’s teaching. Wherever he offers class, dancers go; it seems some would follow him anywhere.

Evidence of Proia’s teaching flair was plain in the evening’s highlight, a performance on the backyard patio. There were introductions from Proia, Proia Dance Project board president Jim Glover, secretary Meg McCabe and Marietta city manager Bill Bruton.

After a video compilation of Proia’s works, eight classically trained dancers rushed out to the marley-covered patio. To a deep, reverberant dub step rhythm, they unfurled phrases of clean lunges, bold leg extensions, rapid turns and surprising direction changes. It was grounded, clean and smooth — a touch of Jack Cole with an ultracontemporary feel.

Finally, before a a café table set with glasses of red wine, Proia waltzed with each female dancer in succession to Edith Piaf’s lush rendition of “La Foule.” Proia was as debonair as Fred Astaire, whose films inspired Proia in his youth as he trained with the Paris Opera Ballet, and later as he danced with the New York City Ballet, the Martha Graham Dance Company, Martha Clarke and others. In closing, Proia declared to the audience, “I love my dancers.”

It was a heartfelt moment for Proia, who has emerged from a tumultuous year as artistic director of Georgia Ballet, a local, semiprofessional ballet company. By the April 2014 premiere of Proia’s The Four Seasons, company dancers glowed with newfound strength, freedom and confidence in their artistry. Proia’s abrupt dismissal from Georgia Ballet after the concert run was a crushing blow.

Proia Dance Project came out of picking up the pieces. He had considered seeking teaching jobs back in New York. But key people in the community — Glover (a Sotheby’s agent and descendant of Marietta’s first mayor), Bodnar, McCabe and others — saw his potential and asked him to stay. They talked about what was needed in Marietta, and ideas for the nonprofit Proia Dance Project and for-profit TranscenDANCE establishment on Marietta Square came into being. Proia, with his distinctive French accent and urban manner, saw the chance to bring vibrancy and sophistication to the community; it was also a chance to set things right.

Proia has encountered naysayers who think Marietta isn’t ready for his vision. But Proia remains optimistic. The city has a large student population, and a real estate development of some 240 new apartments is going up around Marietta Square. Along with it, Proia said, will be new buildings, businesses and restaurants.

As for Proia’s class, it can’t be found on a syllabus; some days it’s classical Franco-Russian training; other days, fluid and contemporary; sometimes it’s a mix of both. Some dancers find his movement combinations too choreographic, Proia said. But others enjoy the variety and unpredictability, and the way he pushes them to develop technique and musicality while thinking, laughing or just enjoying the richness of living in the moment.

“The way I teach does not fit into a box,” said Proia. “But there is an abundance of love. It’s not always at the surface, but I can feel it inside,” he said. “I love the music, I love the space; I love to share it with people.”