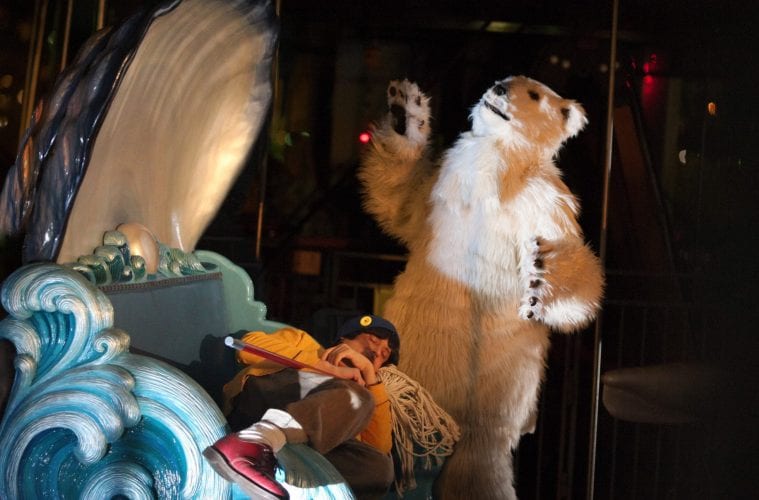 A little bit of mischief and a mop: the transformative magic of “The Orbiting Human Circus”

For one joyful evening, this Friday, May 26, Atlanta’s Drunken Unicorn, a venue known for beer-soaked raucous nights, will host a unique piece of musical theater performed by a lonely and lovely janitor. He’ll do his best — though almost certainly fail — to clean the venue from top to bottom in-between moments of magic, mischief and music. The janitor, played by Julian Koster, will bring the beloved podcast The Orbiting Human Circus to life. Koster and the team behind Night Vale Presents will take advantage of the whole room throughout the performance — from front door to stage — to whip up an original mix of theater and music to create an evening full of enchantment.

Koster, who developed and honed his musical chops as a member of revered Athens-based collective Elephant 6 (The Apples in Stereo, The Olivia Tremor Control, Neutral Milk Hotel, etc.), found a connection with the group behind Night Vale Presents when he realized that “Magic is a great love — for all of us.” The first season of The Orbiting Human Circus follows Julian the Janitor as he stumbles his way through the Eiffel Tower, trying to both unravel the mystery of a variety show emanating from the famous Parisian monument and simultaneously keep the place spick and span. Both the first season and the recently released An Orbiting Human Circus Special: The 2nd Imaginary Symphony take the sound of classic radio shows like The Cinnamon Bear and infuse it with all the wonder and pitch-perfect timing of current podcasts like RadioLab.

One thing’s clear: the creators completely embraced letting their imaginations go wild. Julian, when not breaking out into songs that highlight his achingly sweet voice, banters and adventures with a cascading cast of characters including the (possibly imagined) show’s narrator, bears, a tap-dancing mouse and a hypnotist. The whole fantastic contraption is wrapped in enough intrigue and charisma about the variety show to lasso you into binge listening to the entire season in one afternoon. The beauty of a great audio experience — be it song, radio drama or podcast — is sound’s ability to bring imagination to the forefront. Sound envelopes the listener, invites us to embrace the story, an experience that permeates into our reality. A song can prompt a smile. A radio can bring voices from all over the world into a living room or car. And, as The Orbiting Human Circus has shown us, our phone is capable of transporting us to the Eiffel Tower. It’s pure magic.

One of Koster’s goals for the live show is to bring adults back to that feeling of being young and open to the idea that all experiences are imbued with the possibility to be extraordinary. “Kids are like metal detectors on the beach; they can tell when something is real or special or pure. An alarm goes off and they interact with the real or true pure thing there.” Too often, as adults, we walk into a club like the Drunken Unicorn and feel like we already know everything that’s going to happen and shut ourselves off from the unlimited possibilities of wonder in the room. The crew of The Orbiting Human Circus, in Koster’s words, plan “to create the sense of the miracle of being alive, to let the sense of the unknown wake us up to it.”

Koster acknowledges that his fascination with magic was sparked at a young age. “Magic tricks and beautiful illusions were created for me by my grandfather and great-grandfather that completely blew my mind. They had the power. The idea of magic as a conduit for vast amounts of fun and love was a really early lesson for me about being alive.” That conduit is felt as each episode of the podcast allows us to experience the mystery of the variety show with the janitor and his escapades that stem from it. Each song he sings carries the pain and hope of being human, each misadventure brought on by a willingness to be open and kind to those around him, and each fantastic situation feels completely plausible because it’s delivered with a master magician’s touch — he believes in the magic so you do too.

The reality created on stage, and all around the venue, will be “the world of the janitor.” This world, of a profession we often take for granted, is both lonely as he works by himself night after night and hopeful as he strives to understand his place in each venue and searches for something more. As the narrator explains in the first episode, in his loneliness the janitor has “gone so far as to imagine a narrator to keep him company, announcing the events of his life as if he was the star of screen, stage and story,” giving Julian someone else to talk to each night as he searches for meaning in the unknown of his daily life.

Koster says not to worry if you’ve never listened to the podcast and know nothing of these details because the live show is “designed to entertain someone who knows nothing.” All that’s required is an open mind and to embrace the idea that life is all a dream. “Our imaginations create the realities around us,” Koster says. “That’s why when we dream we can actually touch things and smell things.”

The only thing not to do is treat the show like something you’d normally see at a rock venue, where the starting time rarely matches the time listed online. The world that Koster and company create will be ready to be experienced the second doors open — this is a janitor who loves his job and will be working before you even get there. His advice: “Show up at [the] doors — there is a pretty hard start time. The janitor has been cleaning the Drunken Unicorn and you are literally walking into the janitor’s imagination.” The night, which starts promptly at 9:00 p.m., promises fun and impossible things and a chance for the audience to get lost in a fantastic reality of their own making.