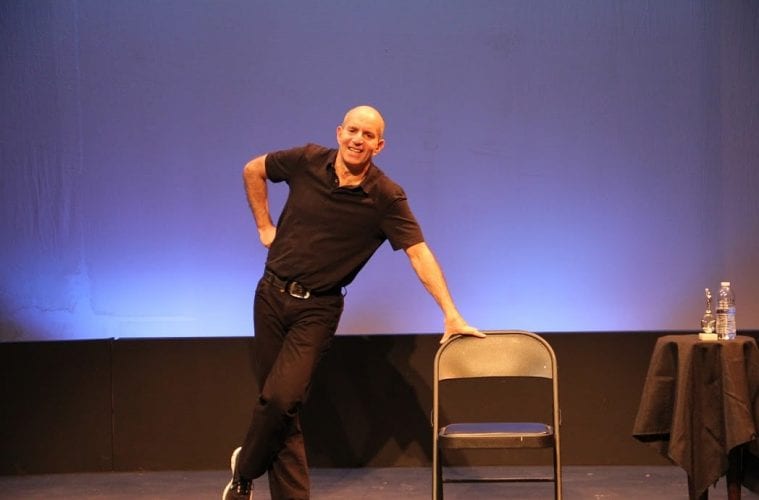 Review: Brad Zimmerman mines his career as a waiter for timeless jokes in funny stand-up show

There are late bloomers, and there are underachievers, and then there’s Brad Zimmerman. For 29 years — “longer than is understandable,” as he puts it — Zimmerman waited tables in New York hoping for his big break in show business without ever actually seeking it out. The actor and comic recounts his experiences, and in particular his relationship with his somewhat overbearing mother, in his likeable and funny one-man show, My Son, The Waiter: A Jewish Tragedy, at Atlanta’s 7 Stages Theatre through June 18 as part of an ongoing national tour.

As the title indicates, Zimmerman utilizes traditional Jewish humor, and he often dives headfirst into the sort of classic Borscht Belt jokes that would have played well in the Catskills 50 years ago. In his hands, they’re all remarkably resilient and evergreen. The show’s humor is charming, and Zimmerman’s situation is sympathetic, though the man himself defiantly never seeks to charm nor does he try to elicit easy sympathy. He is by nature caustic, prickly, impatient and quick with a comeback: in short, he’s all of the things that make a terrible waiter but a fantastic comic. Especially funny are Zimmerman’s tales of encounters with annoying customers and his occasional attempts to wait tables at more upscale restaurants (he’s so unambitious and annoyed by pretension that for most of his career he only had the patience to work at casual establishments).

Zimmerman nails jokes left and right, but still the show never quite takes off as theater, in the truest sense. Waiting tables while harboring hopes for a creative career is a static situation, one Zimmerman milks for all it’s worth — especially when he paints the portrait of his mother in quick, expert comic strokes — but it’s a situation that doesn’t really develop into narrative, which by definition is about moving from point A to point B.

Zimmerman also never really arrives at a bird’s eye view of his years of stasis either; there’s never a profound sense of how and why such a thing would happen to him, nor does he delve into enough shared contemplation of his situation. As it is, confessional autobiography forms a hook onto which Zimmerman hangs a successful stand-up routine, rather than forming something truly revealing or moving about his life. The show’s most memorable jokes are about old Jewish couples, football players, contemporary television and so on. All good stuff, but pretty far from what should be the beating heart of the show.

Still, as comedy goes, Zimmerman has clearly brushed up on the classics and learned from the greats, all of which shows in his expert timing and near surgical handling of timeless jokes. Complaining that what’s been brought to the table isn’t precisely what you thought you ordered is senseless when you’re enjoying everything from beginning to end, and laughing every minute.