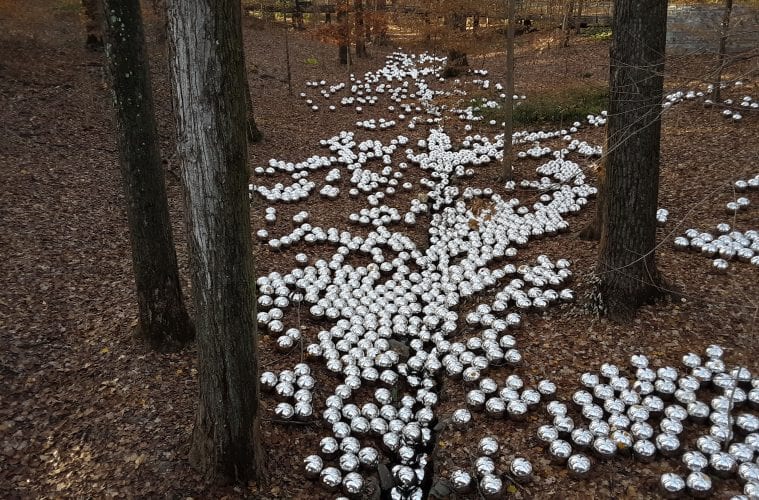 Beyond Infinity Rooms, Atlanta Botanical Garden offers its own encounter with Yayoi Kusama

Couldn’t get tickets to the sold-out blockbuster exhibition Yayoi Kusama: Infinity Mirrors at the High Museum? Or maybe the thought of standing in long lines during flu season for a 20-second encounter with the infinite has lost some of its appeal?

Not to worry. The Atlanta Botanical Garden is currently hosting one of Yayoi Kusama’s signature works, a joint effort between the High and the Garden. On a recent warm afternoon, there wasn’t a line (or indeed many other people) in sight.

A version of the 1966 work Narcissus Garden, consisting of 1,400 reflective spheres, is currently installed in the Atlanta Botanical Garden’s Storza Woods. Created shortly after her first mirror room in 1965, the original iteration of Narcissus Garden caused something of a scandal when it was first staged at the 33rd Venice Biennale in 1966.

At that time, Kusama set up the spheres (the first were made of plastic coated with a reflective silver material; newer ones are stainless steel) outside the Italian Pavilion at the Biennale. Dressed in a silver and gold kimono, she sold the shimmering balls to passersby for 1200 lire apiece (about two dollars) alongside signs that read: “NARCISSUS GARDEN, KUSAMA” and “YOUR NARCISSIUM [sic] FOR SALE.”

Biennale officials stepped in and put an end to her “peddling” outside one of the venerable art event’s official exhibitions. The incident has since gone down as art world legend alongside the notion that Kusama’s act constituted a sort of “guerrilla art protest” or the like. Kusama herself in her 2002 autobiography downplays the “guerrilla” aspect of the installation’s birth and says she very much had permission from the chairman of the Biennale Committee to stage the work.

Regardless, since that original installation, like the Infinity Rooms themselves, Narcissus Garden has become part of art history. It has been recreated in various spots throughout the world, including an abandoned U.S. military base, New York City’s Central Park and Jardin de Tuileries in Paris. The current version was placed at the Botanical Garden by staff from Kusama’s studio in Japan, and it can be admired from many angles from the paths that snake through the property.

The work, like the Infinity Rooms, makes great fodder for Instagram (though it’s worth pointing out that the tag #NarcissusGarden may end up being more revealing than follower-hungry selfie-takers intend). Consider putting the cell phone away for a minute and spending some quiet time with the eerie, contemplative work within the beauty of the forest. The installation will be in place through spring.