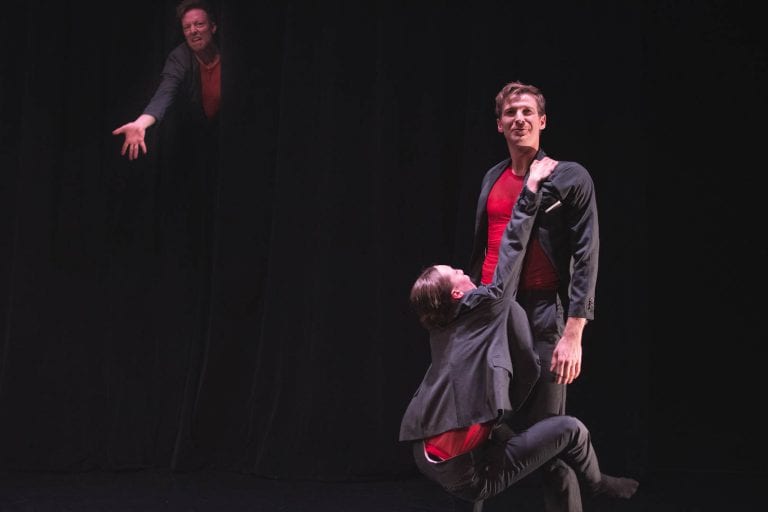 Nathan Griswold (right) played the narrator in Fly on a Wall's Byte. (Photos by Christina Massad)

Last week, the Uncaged Community Dance Festival offered an intimate view into what’s happening on the Atlanta dance scene, and a reminder that it takes networks of artists, teachers and choreographers to push the dance community forward. Hosted by the artists’ collective Bluebird Uncaged, the festival featured its namesake as well as local dance groups ranging from ImmerseATL, a training program for young dance professionals, to the recently formed Kit Modus, Little Minute and Watershed Dance Theatre.

Standing out among festival offerings, Staibdance and Fly on a Wall shared a program last Friday through Sunday, with two original works performed at high levels of technical expertise. Fly on a Wall’s hilariously poignant Byte contrasted excerpts from George Staib’s gripping Moat, which delved into the choreographer’s childhood memories of leaving Iran during the Iranian hostage crisis. His family settled in a small Pennsylvania town, where they faced hostility from locals. In different ways, each work explored ideas related to boundaries, and each seemed to ask: Who crosses them, how and when do we insulate ourselves, and what is the human cost of isolation?

Part of Byte’s success lay in Fly on a Wall’s gift for irony. The one-act dance theater work juxtaposed movement sequences with narration led by the character, the Genevan Heathen (Stephan Armleder’s voice lip-synced by Griswold). The velvet-voiced, late night radio talk show host casts himself as a sort of ideal lover and confidante, accessible only via phone lines and airwaves.

On this journey into the absurd, Byte poked fun at seduction, tempering romantic notions of connubial bliss with pragmatic realities. And then, through the foibles of dating, the piece revealed our craving for intimacy and its flip side of heartbreak and loneliness.

It started with Joyner and Griswold, in grey business suits with orange shirts, back to back, slowly revolving. Kayser joined in, beginning a salsa-flavored tangle of dancers who circled in and out of pairings, hips pulsing with a playful sensuality as they folded and unfolded their limbs around themselves and one another.

Griswold played Genevan Heathen to the hilt. His caller, Steve, asked for advice on proposing to his sweetheart — whom Kayser later portrayed, in a telephone monologue she mostly wrote, as Steve’s take-charge fiancée whose manipulative nature augurs a marriage that’s bound for the rocks.

The piece also layered in questions about personal boundaries and human connections. This, along with some furry props and the creative use of draperies, added to elements of surprise that helped make Byte work. Clever juxtapositions among its 20-or-so sections, and abruptly ending segments, left the work open to multiple interpretations.

The trio’s professional polish — from Kayser’s spot-on monologue delivery to the trio’s technical precision — heightened opposing pulls between performers’ yearning for connection and fear of intimacy. This drove the three through a kind of revolving door of relationships and pressed them to reevaluate who they were and what they desired.

Fly on a Wall will present a full-length version in the spring of 2019. It is not to be missed.

Like Byte, George Staib’s Moat also explored boundaries. But these were not the soft, personal boundaries to be melted through seduction. Now in its second iteration, Moat drew inspiration from Staib’s experience as a child who immigrated to the U.S. with his family, who were greeted with hostility. At one point, misguided locals threw tear gas into his family’s yard.

Many immigrants have encountered similar instances of intolerance and aggression, and Moat gave an immediate sense of what it feels like to be thrown into an uninviting, hostile and strange new world.

Through raw, visceral movement that drove forward relentlessly, Moat’s dancers constructed boundaries out of piles of red rubber mulch, then erased them just as quickly. They were self-protective and defensive at times, hostile at others. At one point, people stationed along the stage perimeter threw handfuls of mulch at dancers in the center and even called out, “Stop,” or “Halt,” creating a fearful atmosphere.

At one point, a line of dancers fell prostrate along the stage’s left-hand border, evoking images of bodies washed up on a beach. In a no-holds-barred solo, Anna Bracewell Crowder flung her body into the air and whirled into the floor as dancers threw virtual clouds of mulch at her. In a brief transcendent moment, dancers scattered across the space, each suspending on one leg with limbs outstretched. They then fell into chaotic, seemingly desperate scrambling for space and for safety.

Staib’s restaging of Moat is a prelude of sorts to Fences, a large, immersive collaboration slated for production next fall, with support from a New England Foundation for the Arts’ National Dance Project grant — more evidence that Atlanta’s dance scene is growing and that the larger dance world is taking note.

Such achievements are grounded in local networks of artists, teachers and organizations like Bluebird Uncaged, whose director, Rebekah Diaddigo, opened 7 Stages Theatre to these performance groups, showcasing the wit, grit and creativity that are unfolding all around us.