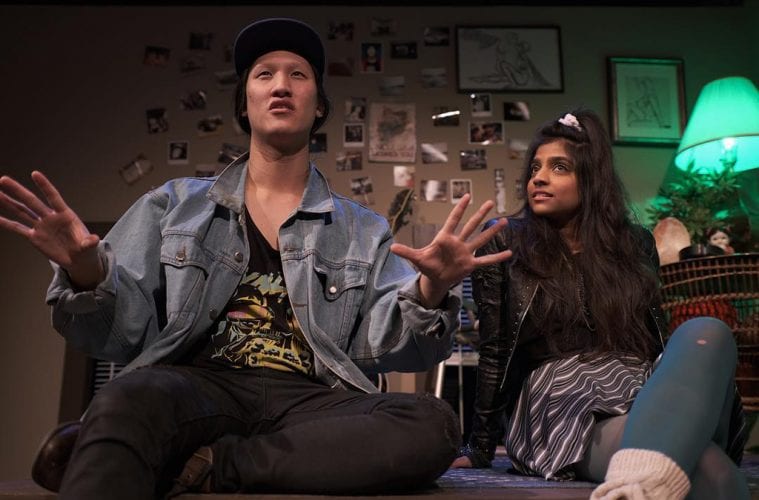 Review: The Kids are not Alright in This Is Our Youth at Pinch ‘N’ Ouch

A strong cast couldn’t help me muster much interest or enthusiasm for the 1996 play This is Our Youth, onstage at Pinch ‘N’ Ouch Theatre through December 22. After he wrote This is Our Youth, the playwright, Kenneth Lonergan, went on to write and direct several films, including 2016’s Manchester by the Sea, for which he was nominated for an Oscar. This is Our Youth originally premiered Off-Broadway early in Lonergan’s career, but in the wake of his subsequent success, the early work has had recent Broadway and West End revivals, often featuring big Hollywood names.

The play takes place in the early 1980s in the Upper West Side apartment of young college dropout Dennis (Derek Evans). The action opens with the arrival of Dennis’ younger friend, Warren (Thien Vuong), who has just stolen $15,000 in cash from his father. Dennis and Warren have a complicated, dysfunctional friendship — the tough, acerbic Dennis often bullies the shyer, more pliant Warren — and the relationship gets a twist from both the money, which Dennis wants to spend on drugs, and the arrival of a friend, Jessica (Annie Jacob), whom Warren wants to seduce by throwing the money around.

Atlanta’s Pinch ‘N’ Ouch Theatre, which is housed in a repurposed sleek, warehouse-style urban apartment, excels at presenting these sorts of intimate contemporary dramas, which are often set in sleek, warehouse-style urban apartments. The action has a “you are there” feel to it, thanks to the details of a fine set, which brings Dennis’ louche, cluttered Manhattan digs vividly to life. Even more impressively, the actors under the direction of Pinch ‘N’ Ouch founder Grant McGowen are so present and spontaneous that there are moments when the show almost doesn’t seem scripted at all. There’s a remarkable note of naturalism, of casual, quiet intimacy to the goings-on. I was especially impressed with Evans as a convincingly spoiled and volatile Dennis, but each of the actors manages to bring something fresh and inventive to their roles. But there’s very little in the script to make us invest in the characters. Various objects emerge as the focus of action and discussion: the sack of money, the drugs and, most interestingly, Warren’s suitcase full of vintage toys, the possible value of which is debated at length. The materialism, the casual attitudes toward sex, money and drugs, and the general sense of moral obliquity among the privileged youth were perhaps more shocking when the play opened in 1996. But the threshold for shock has shot through the roof since then, and we’ve seemingly seen this sort of depiction of young people a thousand times. The overarching atmosphere of disaffectedness feels familiar rather than revelatory, and one finds it harder with each passing year to care about people who care about so little.

I was, however, interested to read that the play originally appeared in shorter form as a one-act called Betrayal by Everyone in 1993 before Lonergan expanded it into this full-length version, thereby creating his first big stage success. I actually think that the original title, Betrayal by Everyone, is much better and wittier than the self-importantly declarative newer one. The notion of the same action unfolding more efficiently in one act seems like a stronger idea than what we now have on stage for two long acts in This is Our Youth.

Some have said that the play comments on Reagan-era materialism, nihilism and selfishness. In the end, I found it difficult to discern anything significant being said beyond the standard, unenlightening observation that the era was rather materialistic, nihilistic and selfish.