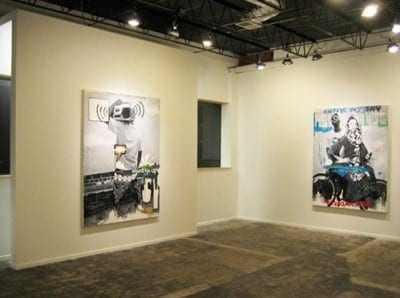 The provocative Fahamu Pecou, at Get This! Gallery and beyond

Babes and bodyguard in tow, Fahamu Pecou swaggered into the art scene a few years ago, playing a hip-hop tough guy. The Atlanta artist developed a branding campaign for said alter ego with the tagline “Fahamu Pecou Is the Shit.” It included motto-baring T-shirts sold on his website and paintings depicting his persona as a celeb on imitation covers of real art magazines. 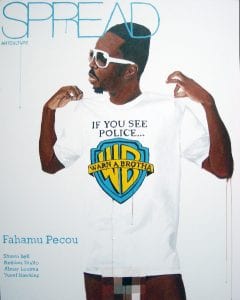 The performance satirized the prevailing stereotype of the black male. The PR campaign and paintings pointed a finger at the media and the larger culture for promoting the stereotypes to the public and impressionable black youth.

When he began this fruitful project, Pecou was not yet, he acknowledges, conversant with the thinkers and conceptual artists (for example, bell hooks and Adrian Piper) who had preceded him in addressing the fraught identity of the black male. Taking his cues instead from hip-hop culture and his own experience, he has found his place, not only in the discussion but also in art-world practice. (Check out Spelman College Museum’s “Undercover: Performing and Transforming Black Female Identities,” which closes Saturday.)

Like Kehinde Wiley’s portraits of young black men in imitation Old Master paintings, Pecou inserts the hip-hop guy into the high-culture of art magazine covers to toy with common expectations. These paintings, a distinctive mash-up of gestural painting, graphic design and street-wise graffiti scrawl, have become his primary vehicle, and he has taken them in interesting directions.

“Warn-A-Brother” (above), which depicts his character wearing a Warner Brothers T-shirt, exemplifies his punning wit. But this comment on the relationship of black men and policemen gets deadly serious: the list of “contributors” on the magazine cover includes Amidou Diallo and Abner Louima

“Blak Presidential,” a recent series, comments on the Obama phenomenon, namely the mainstream’s surprise to see a black man who is accomplished, smart, a loving husband and a devoted father. While speaking to his larger point about stereotypes, Pecou seems to express hope that President Obama and his coterie will change the paradigm.

Pecou deals with his own misperceptions — his stereotyped vision of contemporary Africans — in “Whirl Trade,” a solo show at Get This! Gallery, which I reviewed for the Atlanta Journal-Constitution. And he expresses concern about the effect of American hip-hop on global cultures.

In “Whirl Nigga Laws/Lost,” his scowling alter ego lolls on a chair like an African king. Flanked by two statuesque women dressed in the American Afrocentric clothing that he didn’t find in Africa, he grabs his crotch and a microphone cord—two symbols of potency—in one hand. Yet, note that the (phallic) mic dangles limply at the end of the cord. As Pecou said during his talk at Get This!, “We have the microphone; what are we choosing to say?”

The exhibition demonstrates that he pushes himself technically as well as conceptually. Unlike past work, these are painted in blacks, whites and grays–an homage to Malick Sidibe, the photographer who has chronicled Malian youth culture for 50 years. “Role Model Citizen” is particularly lush, with its dense patterns and gold-and-pink lettering.

Pecou is friendly and unassuming, and it’s tempting to cast him and his alter ego as polar opposites. It might be closer to the mark to see him as the Clark Kent (including the spectacles) to his character’s Superfly. Pecou observed in a recent conversation that black men have multiple personae depending on whom they’re with or where they are. The artist, who recalls acting tough during his youth as a means of self-preservation, makes reference to Paul Laurence Dunbar’s poem “We wear the mask” in at least one of his paintings.

Does Pecou’s wit mask anger? At this point in his life, he prefers the word “frustration” to describe his response to the fact that the African-American male who most resembles his white peers is still an invisible man.