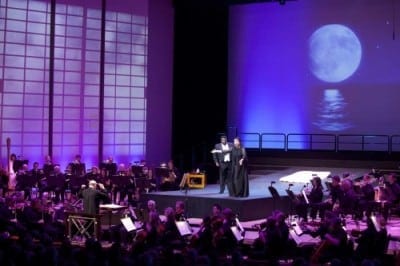 From New York to Berlin, orchestras increasingly offer semi-staged productions of opera and theatrical works as part of their classical season. In the past few years, the Atlanta Symphony has called its version “theater of a concert” — a mix of operas and dramatic oratorios, from John Adams’ “Doctor Atomic” and Stravinsky’s “The Nightingale” to Haydn’s “The Creation.” Most of these have been satisfying, if problematic, events in the concert hall; a mildly “conceptual” setting became an end in itself and often distracted from the music and story. In trying to reinvent the concert experience, the ASO wasn’t playing to its strengths.

This weekend, the ASO and director James Alexander found a more perfect balance with Puccini’s “Madama Butterfly,” the popular tragedy of the teenage Japanese geisha who believes in her marriage to an American naval officer. He’s a vile cad who will never be forgiven, despite singing a few of Puccini’s most gorgeous tenor arias. The ASO’s “Butterfly,” closing its 2010-11 season, is a rare case where each element matched the excellence of the others and intensified the opera’s emotional punch. There are two performances remaining: Saturday night and Sunday afternoon. By opera’s end, I felt I hadn’t seen or heard anything better in Symphony Hall all season.

The unfussy staging covered several levels, with most of the orchestral strings in the (slightly sunken) pit, the woodwinds and brass along the lip of the stage and a central platform for the singers, with a balcony railing in the back, suggesting a little hilltop house. Understated projections on the stage walls gave us a sense of timeless Japan, with sliding screen doors and cascading flower petals. (As Alexander told me at intermission, video projections are the future of opera: who needs to build $25 million sets when artistically smart use of lighting and projected images can also tell an effective story?)

The singers were mostly in concert attire, with a few props and some cute touches, such as Prince Yamadori (baritone Kelvin Chan), a suitor to the distraught Butterfly, with a red sash and a red punk Mohawk hairdo. In all, Alexander’s approach and the proximity of the singers to the audience put our attention on the drama. 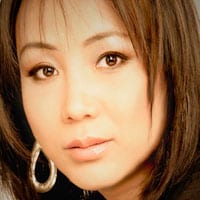 Shu-Ying Li (at left), a Chinese soprano with a booming international career and a specialty singing Butterfly, was here making her ASO debut. She has a remarkable voice. Like many singers today, she puts a premium on smoothness of tone (sacrificing texture), which prevents her from creating a fully three-dimensional character — at least as measured by great singers of the past. But there’s an edge to her sound and she’s expressive, acting as much with her voice as with her face and hands. And the instrument is huge: she sailed over the full orchestra at the climax of “Un bel di,” a greatest-hits aria of painfully deluded optimism.

As her faithful servant Suzuki, Mika Shigematsu’s singing was warm and dusky, focused and pleasantly throaty. Both women thoroughly inhabited their roles, and when four-year-old Judah Kavi Giedd ran onto the stage as Trouble, a little boy in pajamas clinging to his mother, the performance moved from mere opera to devastating, engrossing reality.

As the despicable polygamist Pinkerton, Russell Thomas was a treasure. He’d sung the small role of the Steersman in Atlanta Opera’s “The Flying Dutchman” in 2009, and even since then has grown in command and elegance, his hearty tenor now with a luminous glow. The great baritone Dwayne Croft, singing the god Donner in the Metropolitan Opera’s current “Ring” cycle, was the most compelling and sympathetic Sharpless, the U.S. consul, I’ve ever encountered. Steven Cole made an effective marriage broker Goro, both confident and sniveling.

Conductor Robert Spano’s interpretation in this sort of repertoire — the ASO performed and recorded “La Bohème” in 2007 — works well, lush and often sweet, but never indulging in the score’s underlying sentimentality. (It’s a pity they won’t record this “Butterfly” for the ASO Media label.) A few smudged passages aside, the playing was mostly crisp, the rhythms taut, the pace restless and always rolling forward. Spano let the orchestra play out and play loud, but it never covered the singers. As a result, the orchestra became a dominant character, where mood, psychology and the environment held the center, wonderfully. More importantly for Spano, who’s often tagged as an expert with the baton but pale in emotional substance, this opera brought out some of the deepest emotions Atlanta has ever heard from him.

The conductor brought all the pieces together. Atlanta baritone Morris Robinson (above), as the Bonze, made a startling entrance from the auditorium, thundering his contempt and damning Butterfly for abandoning the religion of her ancestors. Spano had the orchestra hammer the dissonances. It was one of many effective, chilling moments in this production, closing the season in top form.