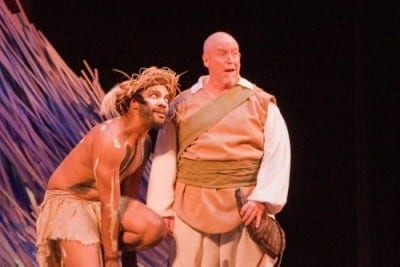 In our modern à go-go view of Shakespeare, where almost every element of the plays can be extended beyond the specific and treated as a universal, it’s no big deal to turn the magical Prospero, the unhappily exiled Duke of Milan in “The Tempest,” into Prospera, the equally magical and exiled Duchess of Milan.

Yet in Sharon Ott’s production of “The Tempest,” opening Georgia Shakespeare’s 26th season, something essential is lost by the change of sex and little is gained — beyond the forced notion that Shakespeare’s characters are, indeed, universal. 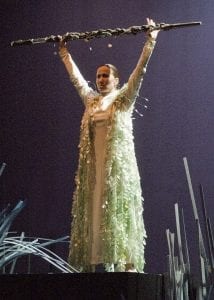 Still, it’s a fun and often funny show, with a few tremendously effective portrayals, a band of shimmering sexy sprites and a set modeled after a bowerbird’s nest (designed by Tyler Tunney). The production runs through July 23 at Oglethorpe University’s Conant Center.

“The Tempest,” perhaps the last play the Bard penned without a collaborator, speaks of viewing a life whole and of retirement, which is tantamount to death, where “every third thought shall be my grave.” With a massive storm at the start — cinematically staged, both frightening and elegant — Prospera brings her enemies to her inhospitable isle, where they continue their murderous power grabs. It’s a revenge play but benevolent in its soul.

In part, Carolyn Cook’s Prospera doesn’t hold the center. Her reading is flat and lacks the intense inner realizations of an all-powerful sorceress who’s plotting her own downgrade to mere monarch status. She is consciously (and inexplicably?) returning to the civilizing rules and petty ambitions of men in society. But more than that: Prospera’s supernatural and absolute powers are a path to higher wisdom, not corruption. Complex and nuanced statements, such as admitting that she’d been deposed by her brother only after losing interest in statecraft — “My library was duchy enough” — pass without insight.

Likewise, the play’s authentic father-daughter language, which any parent will tell you is markedly different from a mother-daughter dynamic, is glossed over in Cook’s relationship with her daughter Miranda, played with wide-eyed innocence by Caitlin McWethy.

Curiously, scenes with the shipwrecked royals feel mostly staid and make-work. Brad Sherrill’s Antonio, Prospera’s usurping brother, seems uncommonly hollow and without direction. Allen O’Reilly’s Gonzalo, with slurry diction, offers many wise words that I could not understand. Best among them are Joe Knezevich as a focused, charismatic and believably amoral Sebastian, who’s ready to kill his brother the King of Naples, a somber and steady Allan Edwards.

Credit director Ott and actor Neal A. Ghant for bypassing political correctness and restoring Caliban to what seems like an Elizabethan ideal of savagery. With claws for hands and feet, and wearing dabs of body paint and a loincloth, he crouches and sulks in a creepy reptilian manner; his large, off-alignment eyes wander dangerously (but vulnerably). Yet his strong-oak baritone and slow, careful articulation show his inner anger and give him a nobility, even as he idolizes Bruce Evers as the drunkard Stephano. Not until Caliban is freed as Prospera’s slave does he stand upright — his evolution, as it were, complete.

The other memorable, just-right casting was Ariel: Georgia Shakespeare veteran Chris Kayser as a semi-nude man-child spirit with a flowery crown and blue suede shoes. Comfortable in his own skin, with a plastic face and neutral diction, Kayser doesn’t ham up the role and thus lets Shakespeare’s language inform the character, a remarkable invention. 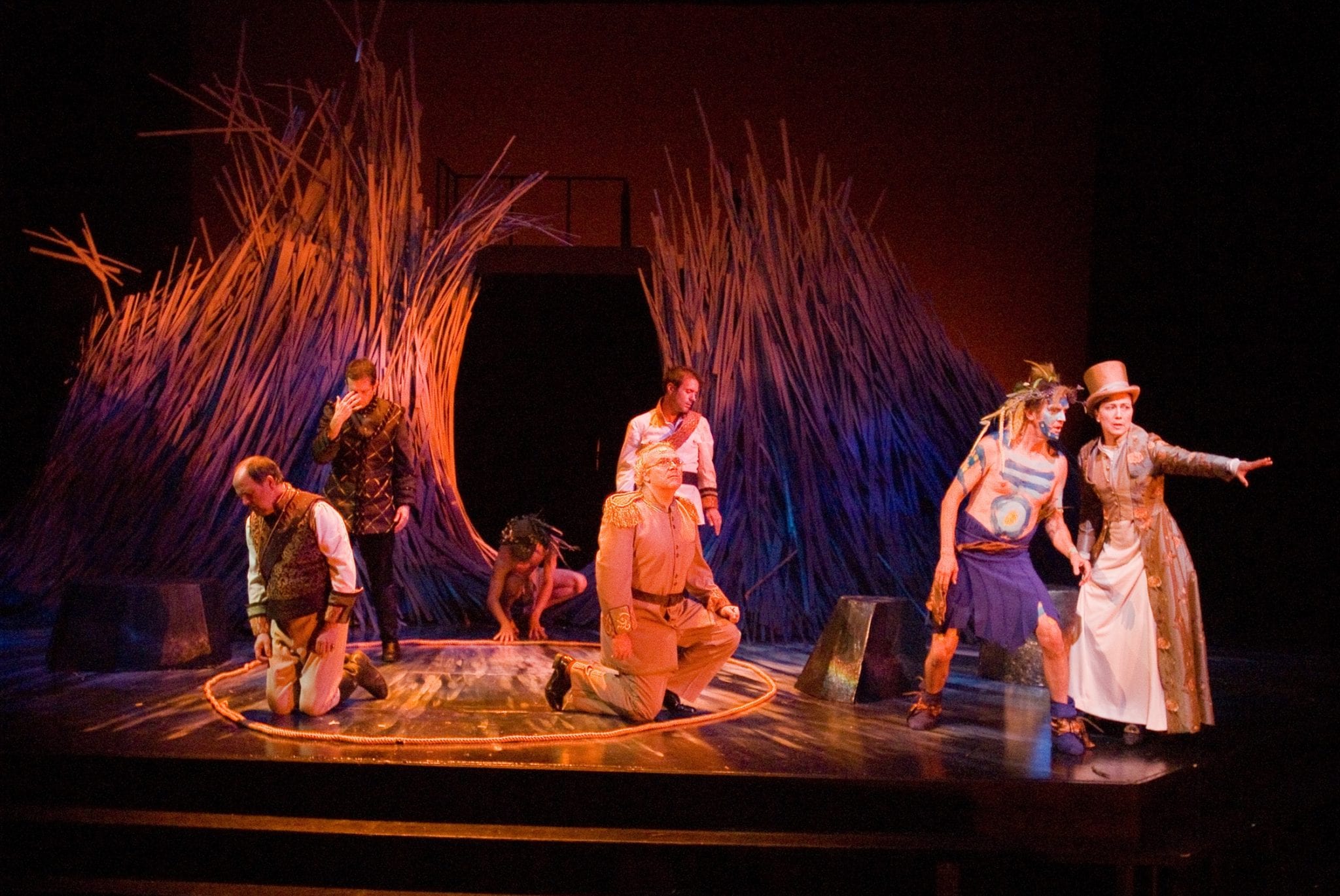