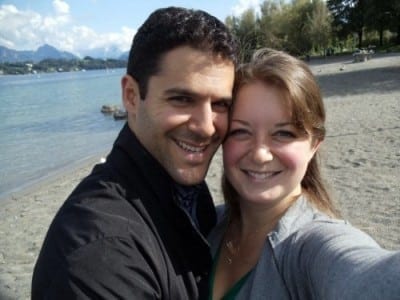 He says: “She ignored me till I got the job in San Francisco!”

She shoots back: “That’s not true! … But we tried not to talk about it, although it was the elephant in the room. We just thought we’d see where it went. But I was crying all the time.”

Then they speak together, laughing and completing each other’s sentences: “Finally we decided we’d date long distance — we knew it wasn’t a fling — it’s four and a half hours by plane and that’s really far — we started playing a lot of ‘what ifs’.”

The Atlanta Symphony will reach its potential as a top-tier orchestra when the best young musicians in the country see it as a destination — as a place to build an enduring artistic culture — and not just as a stepping-stone to more sophisticated or wealthier orchestras in Boston or Chicago or Los Angeles. The ASO has long been able to attract outstanding fresh talent. Now it looks as if it’s starting to retain those players. 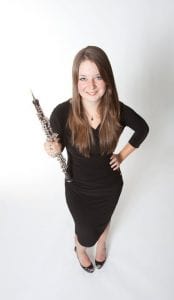 Koch has been a star of the orchestra since she was hired at 21, still a student at the Curtis Institute of Music. Her teacher, Richard Woodhams, is principal oboist of the Philadelphia Orchestra. Some observers suspect that Koch could be Woodhams’ natural successor in Philly when he retires.

Tiscione joined the ASO in 2003, serving various roles as “utility” trumpet. Like a folk singer who finds the greatest satisfaction singing harmony, his dream job was second trumpet in a major orchestra, an essential inner voice. Although Music Director Robert Spano eventually appointed him to the second chair, his upbringing told him to push ahead.

When the artistically progressive San Francisco Symphony was looking for a second trumpet, Tiscione felt compelled to audition. News came that he had gotten the job in February 2010 — just as he and Koch started dating.

The ASO’s trumpet section, he says, “has been a little jumbled” since Christopher Martin quit to become principal trumpet of the awesome Chicago Symphony. (When Martin, a Marietta native, was considering his own decision to leave, in 2005, he told me, “What attracted me to Atlanta was the chance to build our own sound. We’re on such a big growth curve.… Musically, I’m really committed to what we’re doing here, helping my hometown grow to where it’s at the top. It’s a really hard decision for me.” Martin is now at home in Chicago.)

This business of musical chairs is complex. Thanks to union contracts, musicians with tenure in one orchestra can take a job with another and spend a year or more in the other city deciding whether it’s a good fit. So, technically, Tiscione had a leave of absence from the ASO as he headed west. 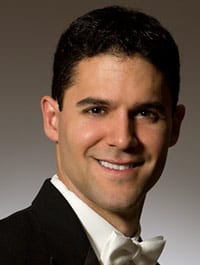 “I thought the tenure process would clarify things for me, for us,” he recalls. “Liz was very supportive either way. If I didn’t get tenure in San Francisco, I’d be back in Atlanta.”

He started in San Francisco in September. The on-stage chemistry was immediate. The musicians’ tenure committee included Music Director Michael Tilson Thomas, perhaps the most inquisitive and gifted American conductor on the scene. The group voted to give Tiscione, in effect, a lifetime appointment.

Uh-oh. That’s when the young couple played through their “what if” scenarios. “We thought, what if Liz waited for the principal oboe job to open in San Francisco? But that might be many years, and there’s never a guarantee you’ll get the gig,” he says.

“What if I got Philly and Mike auditioned there?” she counters. “But no matter what, we knew we’d be waiting to start a life together. We’re both so close to our families; did we want to have a career-centered life?”

“We pretty quickly decided that we already had what we loved, playing together in the same orchestra. I love living in San Francisco [the season there officially ends in July], but I felt a little emptiness.” Despite the unexpected departure — leaving the Bay Area for Georgia? — Tilson Thomas remains determined to capture his man: the conductor has shrewdly granted Tiscione a leave of absence from San Francisco. Officially, he’s still on the roster of both orchestras for at least another year.

How are the couple’s ASO colleagues reacting? “They’re in shock that he decided to come back,” Koch answers. To seal the deal, they’ve made a promise to each other: no more auditions. As much as anyone, the ASO will benefit from this love affair. That musicians of this caliber have chosen to remain in Atlanta says a lot for the orchestra’s artistic health and its short-term potential.

“I’d never felt that Atlanta was only a temporary city for me,” Koch admits. “Now we just have to convince others in the orchestra not to leave!”