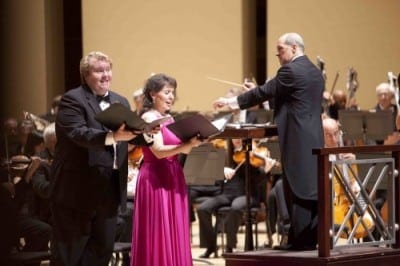 ASO review: A new fanfare and brilliant springtime rarities from Rachmaninoff and Britten

Spring was the theme this weekend at the Atlanta Symphony Orchestra. But big trouble arrived, during Saturday’s performance, when it edged into summer.

The latest fanfare in celebration of Robert Spano’s decade as the ASO’s music director — 10 across the season — came from Robert Pound, a composer at Dickinson College in Pennsylvania and a regular visitor to Atlanta.

In 2005, the ASO premiered his “Irrational Exuberance,” based on former Federal Reserve Board Chairman Alan Greenspan’s description of the stock market during a period of economic frenzy. But what once seemed like a celebration of good times has since become a cautionary tale. Indeed, the work might join the overture to “Don Giovanni,” “Till Eulenspiegel” and the various versions of “Faust” in a musical rogue’s gallery.

Pound, a Georgia native, has also been the ASO’s regular “cover” conductor — lurking in the wings in case the scheduled maestro chokes on a peach or dies of ennui at five minutes to curtain. Pound’s engaging new fanfare, three minutes long, is called “Heartenings, charged with invented time” and is inspired by Atlanta poet James Dickey’s “From Time.”

With springtime in the air, the fanfare puts us in Nature, with thunderclap drums and bird chirps and the evocation of strong flapping wings. By design, there are moments of organized orchestral chaos. Amidst the blaring, a little tune emerges from the strings suggesting a shy voice saying big things. It sounded like the start of a larger work. Spano and the ASO played the world premiere beautifully.

Sergei Rachmaninoff’s “Spring,” a 15-minute cantata for baritone, chorus and orchestra, premiered in 1902 in Moscow and finally made it into the ASO repertoire. Drawn from Nikolai Nekrasov’s poem “The Green Noise” — a folk expression for the return of springtime — the cantata is riveting as storytelling and meltingly lovely as music. Snowed in for the winter in a peasant hut in Russia, a husband recounts his wife’s confession of infidelity and his plan to murder her in revenge. Baritone Stephen Powell, with a flowing delivery, chestnut-brown timbre and excellent Russian diction, sang with operatic intensity, as if it were Verdi.

As the orchestra paints a blossoming and fragrant landscape, and the chorus sings of “the green noise, the noise of spring!,” the enraged man yields to the “song in the forest, in the meadow” and lets the knife fall from his hand. In a gorgeous coda, baritone and chorus sing “Love, while you still can love; Endure, while you still can endure” and let God be the judge. The music comes to rest on quiet plunks from the strings, a moment of serenity.

Rachmaninoff’s “Spring” is so enthralling, Spano’s conception of the work so sympathetic and taut, and the Chorus (prepared by Norman Mackenzie) sang it with such depth and tenderness, that they ought to record it for the ASO Media label. They should certainly propose taking it to Carnegie Hall in the future.

Another rarity, Benjamin Britten’s “Spring Symphony,” is really an orchestral song cycle for a trio of vocal soloists and chorus. (The ASO and Robert Shaw had programmed it once, in 1984.) It’s a celebration of the transition from winter to spring and a celebration of 16th- and 17th-century English poets, from Thomas Nashe to John Milton. Britten also sets a poem by his friend W.H. Auden. The symphony is unmistakably the Britten of the late 1940s — it was composed between “Peter Grimes” and “Billy Budd” — with that vivid personality and poetically whimsical orchestrations.

Many of the songs have a distinct soundworld, such as “The Merry Cuckoo,” backed by off-kilter trumpet fanfares and with Edmund Spenser’s words sung by Anthony Dean Griffey, a tenor with a hefty, bright voice who has played Peter Grimes and offers a man-child balance of innocence and masculinity — a very Brittenesque trait. “Spring, the Sweet Spring,” from a Nashe poem, has quirky woodwind figures supporting the singers in a contrapuntal impersonation of birds: “Cuckoo, jug-jug, puwe, to-witta-woo!”

Members of the Gwinnett Young Singers and the ASO Chorus. (Performance photos by Jeff Roffman)

Flutes, piccolo and tuba make a touchingly comic palette for “The Driving Boy,” sung by radiant, dark-hued soprano Jessica Rivera, an ASO regular, and the children (mostly girls) from the Gwinnett Young Singers. The chorus was cloaked in saturation harmonies as they sang Milton’s “The Morning Star.” With velvety lushness, mezzo Kelley O’Connor, another welcome ASO regular, sang “Welcome Maids of Honor,” after a Robert Herrick poem, in a setting for lower strings and no violins. The sounds and images were so divinely beautiful that many in the audience Saturday night might have thought they’d been Raptured.

In the middle of this emotionally and intellectually invigorating program, Spano and the ASO suffered an almost total collapse during music from Mendelssohn’s “A Midsummer Night’s Dream.” Although this is popular repertoire and the ASO returns to it often, the playing was shabby, the perspective nonexistent and the attitude seemed hostile, somewhere between “I don’t like this” and “I don’t care.” We’ve heard this scenario before, where new or unfamiliar works soak up all the enthusiasm and the old classics are treated like junk. Spano and the ASO get huge credit for bringing neglected masterpieces to life, and performing them with insight and passion. But the music director and the musicians will not grow artistically at home or in reputation nationally if they frequently stumble on core repertoire.