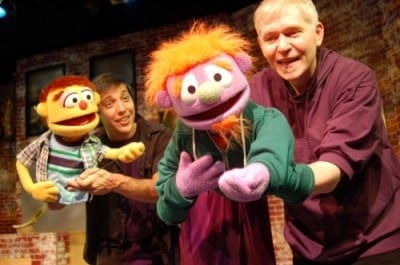 Puppets that pant, grunt and try out sexual positions that would make Miss Piggy blush. This should give you a hint of what happens in “Avenue Q,” the naughty “Sesame Street” send-up that imagines a group of hopeful kids in the midst of a series of post-collegiate identity crises — trying to get a job, pay the rent, find true love and discover a sense of purpose.

“It Sucks to Me,” “Everyone’s a Little Bit Racist,” “The Internet Is for Porn.” Terribly un-PC yet laced with kernels of truth, these are some of the songs from the delightful show that upset the 2004 Tony Awards, beating “Wicked” for best new musical. With concept, music and lyrics by Robert Lopez and Jeff Marx and a book by Jeff Whitty, “Q” has enjoyed a circuitous, track-jumping ride from off-Broadway to Broadway and back. (It’s now running off-Broadway at New World Stages.) It has played Las Vegas, toured the globe and survived the death of Gary Coleman, who is a character in the play. Recently, rights to the raucousness were released to regional playhouses such as Atlanta’s Horizon Theatre, where it opened over the weekend in a freshly imagined, marvelously sung production directed by Heidi Cline McKerley. The madness continues through July 3.

An “Avenue Q” fan since I first heard “What Do You Do With a BA in English?,” I’ve seen the chamber-size piece get lost in the palatial spread of Broadway’s John Golden Theatre, Atlanta’s Fox Theatre and the Cobb Energy Centre. I’ve been leaning forward too long, so it’s good to relax and put my telescope button on pause. Set designers Moriah and Isabel Curley-Clay erect a charming block of city tenements — scenery that affords a bird’s-eye view of Trekkie Monster’s porn-strewn lair and folds out, like a Murphy bed, to place us in the steamy boudoir of Princeton (Nick Arapoglou) and Kate Monster (Mary Nye Bennett). There’s also plenty of random cuteness; that miniature overstuffed armchair in Rod’s cubbyhole is a-DORE-able. To reflect the incandescent personalities that dwell on Avenue Q, puppet craftsman Russ Walko has assembled a motley crew of hand and rod puppets stitched in day-glo fur and fleece. Nicky (Jeff McKerley, plus one of actress Jill Hames’ arms) has a tiny red soul patch. Rod (J.C. Long) is all blushing pink plush. Lucy the Slut (Hames) is a shock of bright orange and flaming red. (Since Broadway designer Rick Lyon’s puppets reportedly cost up to $10,000 a pop, you have to admire Horizon for not cutting corners here.)

While the original template calls for sweet, idealistic Kate and scheming whore Lucy to be played by the same actress, McKerley uses two different performers, a choice that clarifies matters while sacrificing the universal notion that our primal dark side is forever at war with the light. (You have to love Hames’ sultry-voiced Lucy, though.) Arapoglou and Leslie W. Bellar (Christmas Eve) are both first rate, delivering brightly polished performances that are as good as you’ll find anywhere. As the daffy Asian-American therapist engaged to out-of-work Jewish comedian Brian (Matt Nitchie), Bellar fully understands the comedy of her frequently exasperated cross-cultural character, who is always confusing her “R”s and “L”s (“The More You Ruv Someone”). With Christmas Eve as her muse, designer Anna Jenny’s costumes reach a giddy high point of kimono-clash-tic excess. Casting the Fezziwigian Spencer G. Stephens as the pint-size Coleman, whose bum luck has landed him as the “super” of Avenue Q, makes for good silly fun. Jeff McKerley, an actor known for taking his comic shenanigans to outrageous extremes, does a decent job as Rod’s crush, Nicky. McKerley also plays one of the Teletubby-style Bad Idea Bears alongside Hames, and the two make quite a pair. However, some of the casting choices can be a bit confusing and awkward. Sometimes Trekkie is played by McKerley, and sometimes Long provides the voice. With a personality this indelible, you need a single spokesperson. Having Hames provide the “second arm” of Nicky seems superfluous and tacked on; though it isn’t necessarily the actor’s fault, you can see the trouper straining to keep up with McKerley, who happens to be a good bit taller.

Other poses look forced and unnatural, too. When Arapoglou’s Princeton is trying to slouch in bed and shoot the breeze — at least I think that’s what he’s doing — he’s all elbows. On the acting side, Long seems to have to work too hard to find the swish of musical-theater lover Rod, who sings about having a girlfriend in Canada (how convenient) and has one of the most shocking lines in the show.

A couple of other probs: it sure takes a long time for Kate’s pivotal coin to drop from the top of the Empire State Building, and it’s hard to make much connection between Bradley Bergeron’s poorly conceived videos and the action.

These are fairly minor quibbles, however. Whitty (“Bring It On: The Musical”) and Lopez (“The Book of Mormon”) are some of the smartest young writers in the biz, and I hold “Avenue Q” in highest esteem. So it’s lovely to see it handled so well on a smaller scale. Maybe it will be a Monster hit.