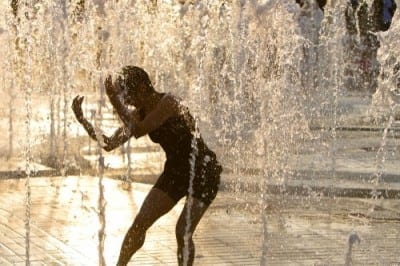 Water, as the women of Zoetic Dance Ensemble tell us, is a natural resource, fundamental to our existence. It helps create and preserve life, cools, cleanses and heals. But if we try to harness it too tightly, this force of nature overwhelms, inundates and drags us down.

In “Catch & Release,” a new site-specific work set in Centennial Olympic Park’s Fountain of Rings, this all-female contemporary dance troupe showed that people’s relationship with this elemental resource is a lot like our relationships with one another. Survival depends on acceptance, finding balance between imposing tight controls and letting natural forces flow. Choreographed collaboratively by Zoetic with Artistic Director Melanie Lynch-Blanchard as creative director, “Catch & Release” is Flux Projects’ first performance at this well utilized downtown public space, ideal for Flux’s intent: to catch people where they live, work and play and engage them through temporary, site-specific art. The Atlanta Office of Cultural Affairs also helped with the performance’s modest budget.

Friday’s lunchtime performance welcomed summer: jackets came off, hats and sunglasses on. Chlorine-scented water gushed up through the some 250 fountains that form the five Olympic rings. Children ran through virtual curtains of spouting jets, squealing with delight at the feeling of cool water on warm skin.

The dance’s story, a journey from rigid motion to soft, gentle flow, represented a way of relating to nature — and people. What was at first too controlling ultimately became accepting, fluid and harmonious.

About 100 people watched six dancers in black swimsuits, sneakers, swim caps and dark goggles, designed by Lisa Polunin. To foghorn sounds, they began in a static tableau that one might see at a synchronized swim competition. Some struck gymnastic balances on one leg with the other extended high to the side, foot in hand. Movements were deliberately contrived, restricted with military precision.

As the dancers dispersed among the five rings, movement seemed imposed from external forces that grabbed them by the shoulders and knocked them down. Attempts to stop the spouting water were futile. Dancer Joanna Futral became entrapped in a net that eventually immobilized her. Lynch-Blanchard, dressed in a pinstriped business suit, put a dress on Futral as other dancers put dresses on over their swimsuits, hair flowing. The rings became enclosures for combative tussles. The dancers pushed against one another, butted heads, grasped shoulders from behind and tried to restrict and manipulate each other, as in a highly competitive place of business. Harsh music changed to gentle, sustained harmonies as the motion softened. The dancers changed into sheer grey tunics, lined with sparkle. There was a sense of freedom and fluidity, like a peaceful feeling at the end of a tough workday. Strong, fluid curves sequencing through their backs and arms became spiraling lifts. Arms tossed in the air with ease as if tossing water upward. They circled upper bodies with a sensual feeling and with fullness, as if taking in all of nature: sun, sky, water, surroundings. Mutually supportive, breathing together, they clustered together in one ring, smoothly curving forward and back, opening chests to the sky.

Danced with the passion, abandon and emotional investment that this small company is known for, “Catch & Release” was a well organized and thoughtfully conceived work that stretched these local artists in a new way and clearly inspired them. It also pointed out the possibilities for this public space, not just as a children’s playground on a hot day but as a venue for artistic performance. Just as gloATL has shown us the potential of Woodruff Park, Zoetic showed that a city’s progress isn’t reflected just in its architecture, but in the creative expression and human interaction that flow through it. (Photos by T. Lynne Pixley.)