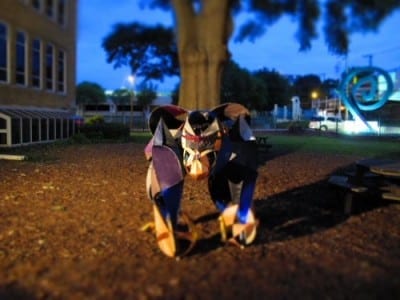 For the past 30 years, the Center for Puppetry Arts’ Xperimental Puppetry Theater, in which professional and emerging artists join to create short, generally subversive works, has been correcting audiences about any misguided notions that puppets are only for the rosy-cheeked, cherub-faced and miniature among us.

But times may have changed. In 2011’s incarnation of XPT, playing through May 22, the sailor talk and drug references may have been eclipsed by the general pottymouthification of American life. Although the show is billed as “for mature audiences only” and “18 & up only,” it’s probably no more foul than much TV and movie fare or a trip to the grocery store. America is letting it all hang out, and avant-garde artists may need to pick up the pace to compete.

More alarming to the underaged or those new to XPT, however, could be the brain-scrambling, non sequitur plotlines that float off into outer space like Stanley Kubrick’s astronauts. That quality of ribald surreality is nowhere more evident than in the film “Starship Starship,” a semi-parody of “Star Trek” directed by Cory diMino, in which a pair of hipsteresque space-traveling dudes in track suits and 1970s-style tinted shades contend with a bounty of outlandish extraterrestrials and space pirates. The kicks in this year’s XPT start even before viewers cross the Center for Puppetry Arts threshold. On a grassy landing, “Picasso” the gorilla (above) — a sort of Cubism-meets-Mummenschanz colorful beast with glowing blue eyes — cavorts along with his irreverent trainer in a pith helmet, who warns the crowd that “the polygon gorilla is about to drop a deuce.” Things get even wackier inside.

Sporting a nearly equal number of filmed works and live performances, and some pieces that combine both, and set within a variety-show format, this year’s XPT lives by the maxim that if it has a hand up it, a stick supporting it, a costume covering it, a human manipulating it, or anything inanimate moving with a force not its own, it is in legion with the puppetry arts. Even an uncooperative film screen gets in on the raucous proceedings. When a mid-show snafu causes the screen to sputter and no longer retract, a group of puppet henchmen rushes onstage with ladders to fix it. For the rest of the evening, the joyous and primed-for-mayhem audience greets every unfurling and retracting of the screen with delighted applause. Do-it-yourself aesthetics and nonlinear story lines reign as everything from glossy black garbage bags to baby dolls become the task masters of puppetry. In no particular order, the evening goes something like this: a wickedly grinning, crazy-eyed woman in dominatrix boots hosts an R-rated improvisational children’s show in “Hoorah What What Oh Yeah!,” with foul-mouthed muppets whose Crayola colors and happy pop eyes are humorously juxtaposed with their dirty-stuffing minds. In the course of the show, two baby puppets are accidentally fed cocaine and the children’s show intern becomes an overnight heroin addict. Ditties about sex are sung, and audience participation is invited. A man from “the greatest generation” sat stoically beside me through it all, undoubtedly silently vowing to never again accompany his offspring to the theater while visiting Atlanta. (Photo above by Monica Ellis.) Some of the works are anarchical in the extreme, suggesting tastes weaned on “Adult Swim,” where surreal humor and pop-culture sampling are the gold standard. In that vein, the short film “Jesus and His 40 Thieves” is a medley of demented puppet antics telling a scrambled, historically inventive story of Jesus, who at one point appears as a baby doll with 5 o’clock shadow and a gangsta “Jesus” tattoo on his torso. Narrated by a Texas cowpoke puppet in a syrupy drawl, the film’s subversive intent seems to be to poke fun at equally inventive Southern interpretations of the Bible to suit personal agendas. On an equally manic, nutty note, “Sonic Mole Chaser” is another film infused with a frisson of Southern wackiness in its tale of a McMansion-owning puppet man who employs a novel system to rid his emerald-green yard of moles.

A highlight of the film program, which earns marks for being both concise and narratively cogent amid such giddily anarchical work, is “The Wind-Up Boy,” by Beau Brown and Darrell C. Hazelrig, about an older man who becomes devoted to the automaton child he has previously kept in a vintage wooden chest but who soon becomes his beloved companion.

Despite all the raucous hijinks, the show ends on a surprisingly melancholy note with “Schweinehund,” about an elderly man recalling his torturous experiences as a gay man during World War II, drawn from his memoir “I, Pierre Seel, Deported Homosexual.” The most technically ambitious and artful of the assembled puppet programs, this frighteningly enclosed, claustrophobic work combines animation and puppetry in an exceedingly artful and seamless way. It epitomizes the exceptional artistry of the puppetry form, in which tiny, helpless-looking human figures become poignant proxies for real human suffering.

There is a streak of sentimentality in the show, as in “The Wind-Up Boy,” especially when it comes to old men, such as the one in “Schweinehund.” Perhaps that’s because even Gen Y puppet masters know that eventually we all grow up.