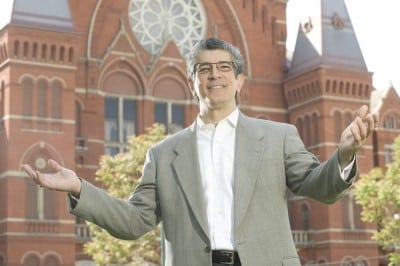 The 95 or so musicians on stage make the music, and the conductor waves a little stick and somehow gets the band to play together; an audience sits and listens. Those are the basics of an Atlanta Symphony Orchestra performance, but behind the scenes it takes an industrious hive of managers, administrators and worker bees to organize and produce a concert, to raise money and sell tickets, to hire more musicians and, not least, plan smartly for the future in a rapidly changing cultural landscape.

The part of the organization that scouts for and coordinates visiting talent — especially guest conductors and soloists — is called “artistic planning,” and since 2006 that key job has been filled by Evans Mirageas, a multi-faceted manager-administrator-adviser who has traveled extensively and visited Atlanta rarely. He calls himself “a roving talent scout.” The ASO called him director of artistic planning, and it was the largest orchestra in the country without someone in-house in that role.

Today the ASO announced that Mirageas, who lives in Minnesota and, among other duties, is artistic director of the Cincinnati Opera, will finally move to Atlanta and assume a formal title, vice president for artistic planning — a small but meaningful change. His new title takes effect January 1.

Mirageas will remain at the Cincinnati Opera (a summertime festival) and consult with a variety of clients, from conductors Sir Roger Norrington and Mei-Ann Chen to ensembles and venues in Memphis, Montreal, Philadelphia and elsewhere.

“This [VP status] is mostly a change in geography for me, but it means a consistency of observation from the other side of the footlights, as it were. Me being in Atlanta will reduce the stress on everyone else. It’s like making a recipe but not being there to taste it — you’re not sure how it turned out. Now I’ll know how that guest conductor turned out, and if that pianist should be invited back. For the past five years we’ve managed it, but it was a strain.”

But Atlanta has benefited from this jet-set arrangement, he said, offering an example: “Atlanta heard the young conductor Vasily Petrenko well before Chicago and Cleveland and Philadelphia. Why? Because I heard him first and booked him with the ASO.”

The change in his status came about this summer, Mirageas recalled, through conversations with ASO President Stanley Romanstein and Music Director Robert Spano. “I told them that the ASO, after so much growth and maturing in recent years, needed someone physically there — someone to attend all the rehearsals and the concerts and be the eyes and ears for the music director when he’s not in town.

“But I also said that person will not be me.”

What changed? Mostly the move from the upper Midwest to the Deep South. Mirageas says it wasn’t any salary increase, and aside from more time spent in Atlanta, the job isn’t fundamentally altered. For bureaucratic reasons, the ASO’s parent organization, the Woodruff Arts Center, doesn’t allow non-full-time employees to hold vice president positions. Mirageas, now joining the staff, will also oversee four people.

“I’ve been working with Robert Spano for 20 years and living in Minneapolis with my partner, Tom Dreeze, since 2003,” Mirageas said. “I admitted that the two most fulfilling jobs I do are in Cincinnati and Atlanta. Can’t we move and stop shoveling snow? The Cincinnati season ramps up just as the Atlanta season is winding down, so the two can dovetail nicely. I think the change of geography for me will put the ASO in line with its peer orchestras, and help continue its remarkable growth.”