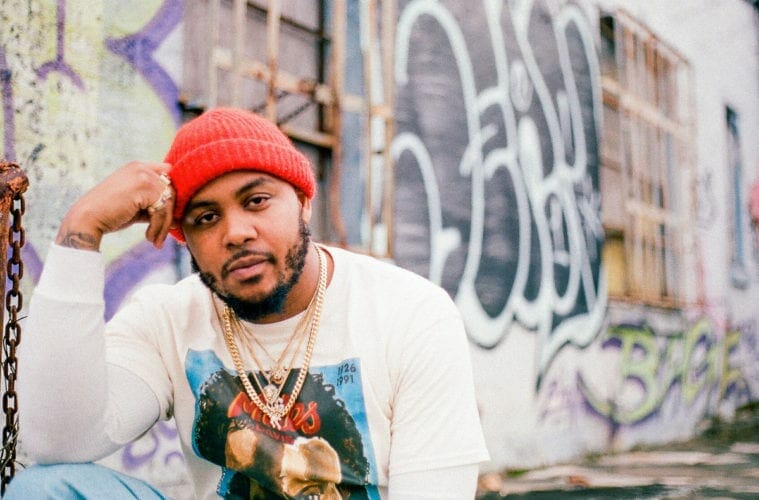 Born Kyle Clow, the East Atlanta-based rapper Grip has been busier than he’s let on in pandemic interviews. Though he’s humbly described spending quarantine “being a dad,” practicing various instruments and playing video games, he’s also released some killer music, including this song, and Halo, a six-track EP he turned around in just two weeks.

Poised to become a star since his breakout 2017 mixtape Porch, Grip has had a few high-visibility breaks so far. His song “100YD Dash” shows up on Madden NFL 20, and his “911 (Clap for Em)” was featured on HBO’s Euphoria. His second album, 2019’s Snubnose, made it onto the Rolling Stone list of the 20 best hip-hop albums of 2019.

His lyrics on “Chicken N Dumplings,” which debuted in late December, are masterful, flowing from one seemingly disparate subject to the next and creating a whole patchwork quilt of memories, regret, sadness, comfort and nostalgia. He packs so much into each line, evokes so much meaning. By using distinct imagery and themes from childhood (to Grip, things fall apart “like Jenga blocks”), he artfully reflects upon the various surprises, disappointments and acquired resiliencies of adulthood.

Though 2020 put things on pause — and led to the cancellation of a major tour he was booked on — hopefully, he’ll keep moving, because, with word wizardry and rap skills like this, the world is waiting.

Callista Clark: “Real to Me (Unplugged)”

Another artist poised to hit the big time, 17-year-old Callista Clark possesses a voice that exceeds her years in terms of the emotional depth it can convey. A recent Billboard piece said this: “Clark’s timbre — much like LeAnn Rimes in the ’90s — is older than her chronological age, as are the characters that seem to draw her in.”

That’s precisely the kind of statement that probably led to this song, which pushes back on those who would question the legitimacy of what young people experience. “Oh, blue still feels blue when you’re green on the vine,” she sings. “Real tears in your eyes, and rain, it’s still rain, even if you haven’t felt it a thousand times.”

Clark began writing songs when she was 11, after her mom read a poem she had written for school and declared, “This is a song.” Soon after, in 2016 at age 12, she performed a duet version of the Sugarland hit “Baby Girl” with the song’s co-author and singer, fellow Georgian Jennifer Nettles.

Raised in Zebulon, about an hour south of Atlanta, Clark is self-taught in ukulele, guitar, bass and banjo. Her YouTube channel is littered with compelling covers. In fact, it’s one particular cover that first gained her internet attention, a viral rendition of Creedence Clearwater Revival’s “Have You Ever Seen the Rain” — something she strummed, at the behest of her grandfather, while sitting quietly on the porch with her family. That video, which has accrued millions of views, changed Clark’s career trajectory and earned the attention of manager Scooter Braun, who also represents Ariana Grande, Justin Bieber and Demi Lovato.

Darryl Rhoades and the Hahavishnu Orchestra: “Burgers From Heaven”

As we enter prime grilling season, let’s savor this oddball ode to cooked meat, courtesy of Atlanta comedy and music artist Darryl Rhoades, who famously formed the 12-piece musical comedy group Hahavishnu Orchestra in 1975. The name is a play on John McLaughlin’s 1970s jazz and fusion group the Mahavishnu Orchestra.

For the next three years, the group would earn praise from Rolling Stone and The Village Voice, appear on the TV special James Brown’s Future Shock and tour nationally. This performance happened on Tush in 1980 — which aired on an early iteration of TBS, hosted by the ever-present Bill Tush. Look closely, and you’ll spot up-and-coming Jan Hooks (Saturday Night Live). Hooks, who died in 2014 at age 57, was from Decatur and got her start in the Atlanta comedy scene.

“Burgers From Heaven” was the title track from Rhoades’ 1979 album, which includes other parodic songs such as “I’m in With the Zen Crowd” and “This Song Is Boring.” Rhoade’s high-profile fans through the years included Frank Zappa, Robert Palmer, Leon Redbone, members of Kiss, Martin Mull and Iggy Pop.

His brand of sardonic mockery wasn’t everyone’s cup of tea, of course. A 1978 pan of their concert in The Washington Post complained of the lack of maturity from Rhoades and his cohorts, who mounted the stage in a giant group featuring “a sax player in a police uniform, a backup singer in drag, two women dressed as unicorns in bunny outfits, a guitarist in a blond Afro wig, a chorus of kazoos and Rhoades himself in an orange jacket and green hat.” The reviewer scoffs: “If the goal was sophisticated parody, the result was bad National Lampoon meets Mel Brooks.” Actually, that all sounds pretty hip to us and makes “Burgers From Heaven” our Vintage Track of the Week.