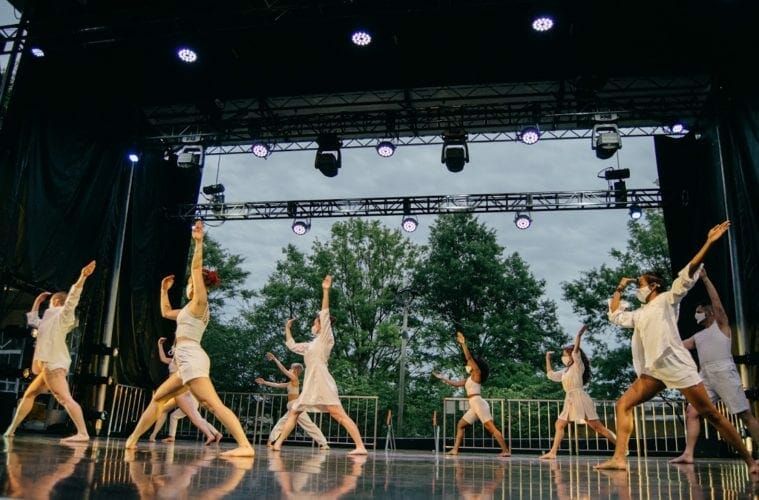 ImmerseATL performs "Continuous Replay," which was created in 1977 but has new resonance in the context of the pandemic. (Photo by Darvensky Louis)

Review: ImmerseATL explores themes of the pandemic with “Continuous Replay”

Continuous Replay: Come Together, presented Wednesday night as part of the Georgia Tech Arts Skyline Series, has a long history with the Bill T. Jones/Arnie Zane Company — Zane created it as a duet in 1977 — but neither Jones nor Zane could have imagined then its relevance during a global pandemic.

Zane died of AIDS in 1988. Three years later, Jones expanded the duet into a group work; that’s the version performed Wednesday by 10 ImmerseATL dancers on the Skyline’s outdoor stage. ImmerseATL is a training and mentorship program for contemporary dancers founded four years ago by Sarah Hillmer. Those performing Wednesday were at different levels of technical ability, but they all delivered the work’s mechanics, message and humor.

Continuous Replay is about whether to follow the rules or break them. (Masks, anyone?) About structure versus chaos. (Working at home? Kids going crazy?) About sticking with what’s safe versus being a rebel and a risk-taker. (COVID vaccinations, anyone?) The way these opposites are expressed in movement is what makes this piece both timely and something to chew on.

A dancer in a white dress walked onstage and stood in profile to the audience. She rushed through a series of mostly mechanical movements, then stopped, staggered back and walked offstage. There was a long beat. She walked back to the same spot and started the series again, slowly and methodically. She began with the first gesture (a turning of the head), stopped, repeated it and added a second gesture, a movement of the arms. Next she strung three movements together, then four and so on — there were 45 gestures in all. She always went back to the beginning, so we started to recognize the pattern and the order of the shapes. These were the “rules.”

One by one the other dancers, dressed in black, joined and mirrored her movements. They were mechanical, emotionless, predictable. The accompanying score was less predictable, a foreshadowing of what was to come. Random snatches from well-known music pieces — Stravinsky’s Rite of Spring, a Strauss polka, Marvin Gaye’s “I Heard It Through the Grapevine” — were interspersed with sounds such as an auctioneer’s patter and birdsong. Since we were outside, we also heard live birds in the trees alongside the stage and the drone of helicopters.

Soon we saw the outliers, the risk-takers, break away from the group. One ran across the stage waving his shirt above his head.  Another did some of the movements, but out of time. Another dropped to her knees and shook like jelly. Some broke away for a moment, then joined the “rules” again. The randomness increased but, through it all, the woman in white (the wonderfully strong and stoic Andie Knudson) repeated the regimented series over and over again like a metronome. The dancers changed clothes bit by bit throughout, from black to white. Some of the rebellion was funny, some disconcerting. At the end the dancers came together, all now dressed in white, and executed the full series in unison.

Chanel Howard, an Atlanta native and now a member of Jones’ company, set the work on the ImmerseATL dancers for this show. She came onstage at the end with six of the performers to talk about it. During rehearsals, she said, she invited the dancers to take more risks, to be a little wilder with their improvised, outlier antics. The dancers expressed how this exercise supported their own practice as dancers and choreographers.

As an audience member, your reaction depended on how you feel about rules, especially during COVID-19. During the show we were expected to follow the familiar pandemic rules: wear a mask except when eating and drinking, stay socially distanced. We sat in pods of two or four, each pod caged on three sides by low metal barriers.

I noticed someone in the pod next to us was wearing his mask below his nose. I had an emotional reaction for sure — he was breaking the rules! As for what was happening onstage, I enjoyed the breakaway solos, seeing how each dancer’s personality and individuality came into focus, but felt a sense of relief when the dancers came together at the end. A dance-loving friend was sitting with me. Her first response was how funny she found the outliers’ solos. Maybe she is less of a rule follower than me.

Continuous Replay: Come Together was a brilliant choice for a pandemic performance. (It’s worth going to YouTube to watch 44 Bill T. Jones/Arnie Zane Company dancers do it virtually in the early summer of 2020 in support of the Black Lives Matter movement.)

It was disappointing, however, to see how few people attended the performance. Perhaps the early evening drizzle and threatening clouds kept people away. Let’s hope the upcoming Skyline Series shows — Atlanta Ballet, Terminus Modern Ballet Theatre among them — attract bigger audiences. It’s live performance, and we need it badly.