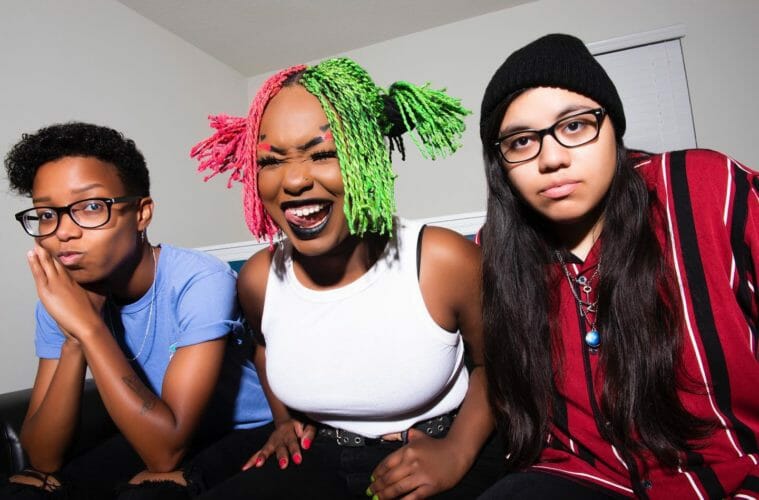 A rising star on the pop-punk scene, Meet Me @ the Altar is currently based in Orlando but tied to Atlanta by its lead singer Edith Johnson (center), who grew up in Peachtree City.

For this cinematic bop, rapper Jamee Cornelia samples the song “He’s the Wizard” from what she has called one of her favorite musicals, The Wiz, specifically the 1978 movie version starring Diana Ross. An appropriate choice since she does have a particular knack for the occasional lyrical magic trick, casually conjuring up lines like “Abracada-bruh” throughout this easy-flowing freestyle.

It’s part of an ongoing series Cornelia has been doing called “Rap Cinema,” where she samples songs from various movie soundtracks as a fun challenge, sometimes taking suggestions from her social media followers. So far, the series includes her sampling of the score from Ari Aster’s 2019 horror jaw-dropper Midsommar and the millennial animated blockbuster Shrek.

Now based in Atlanta, Cornelia grew up in North Carolina, seemingly destined for a career in music through early experiences singing in church choir, playing piano and joining the marching band in school. She was also the lead singer for punk band Howling Star for four years. In interviews, she has described the merging of different musical genres this way: “Punk bands are like, the first ones to really accept hip-hop early on. And I’ve been skateboarding since I was maybe 10 years old, and hip-hop and punk are always intertwined in skate culture.”

Product placement never felt so fun, as the Cinnamon Toast Crunch injects a sugar high to the cheery adrenaline of “Wake Up.”  And yes, those cartoon cereal pieces are called the “Cinnamojis.”

A rising star on the pop-punk scene, Meet Me @ the Altar is currently based in Orlando but tied to Atlanta by its lead singer Edith Johnson, who grew up in Peachtree City. As a teen, she recalls going to punk shows and looking around at the sea of predominantly white male faces in the audience and wondering why there weren’t more people who looked like her. “I wasn’t seeing what I wanted to see, so I decided I’d do it myself,” she has said.

Johnson joined up in 2017 with guitarist-bassist Téa Campbell, who hails from Florida, and drummer Ada Juarez, originally from New Jersey, and the trio of early-20-somethings are beginning to pick up steam, getting a full-length profile recently in Spin. In May last year, the band’s song “Garden” became a hit on TikTok, which led shortly after that to receiving support from Halsey’s Black Creators Fund.

After becoming the first Black and LatinX band to sign on major label Fueled By Ramen — which is home to Fall Out Boy, Panic! At the Disco, Paramore and others — the band released its studio EP debut Model Citizen last month. Soon they’ll be heading out on tour and, one assumes, conquering the world.

The Producers: “She Sheila”

1980 was a whirlwind year, not just because it brought us the Rubik’s Cube. It also gave us this humble hometown group that began as the Beatles cover band named Cartoon but then refashioned their sound into something distinctly more of the era — sometimes referred to as new wave “power pop” — and dubbed themselves The Producers.

After signing with Epic Records and working with the producer behind Cheap Trick and REO Speedwagon, they released two albums in quick succession: their 1981 self-titled debut and 1982’s You Make the Heat, from which our Vintage Track of The Week originates.

At their zenith, The Producers — Van Temple on guitar and vocals, Kyle Henderson on bass and lead vocals, Wayne Famous on keyboards and Bryan Holmes on drums and vocals — toured with Cheap Trick and The Motels, and played gigs with Toto and Hall & Oates.

They moved out to the City of Angels and even performed a spot for MTV’s second annual New Year’s Eve Rock ‘n’ Roll Ball. Unfortunately, this chance to ring out the final moments of 1982 at Radio City Music Hall live on television took a turn for the stressful. By 1985, after infighting with their label and disagreements among the bandmates, The Producers officially broke up.

Thankfully, though, the bad blood couldn’t have run too deep since they eventually got back together and still perform together from time to time. As for Sheila, she’s probably still out there haunting a keytar in some dark corner of the world.