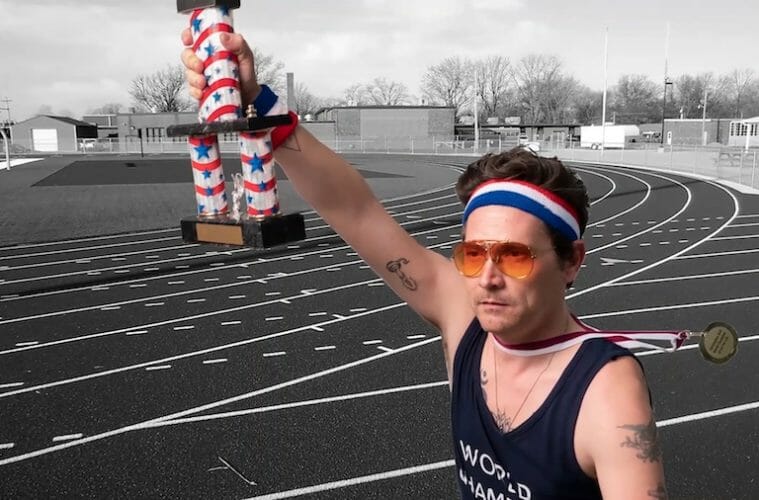 Christopher Hall satirizes the Olympics and American hucksterism in "World Champion of Art."

The dislocations of the successive waves of the pandemic have led to an interesting mash-up (if I may be permitted an antiquated idiom) of fragments of the Decatur Arts Festival and the Decatur Book Festival, which normally frame the summer on the Memorial Day and Labor Day weekends, respectively. In 2021, the arts festival’s juried art exhibition took place on schedule in May and June, but the artist market will occur on October 2 and 3, concurrent with a series of events on October 2 for the book festival that include panel discussions, which can be attended online or IRL (in real life), and pop up booths by local bookshops and publishers.

October 2 and 3 are also the final days of a particularly fine exhibition of artists’ books in the Decatur Public Library, The Book as Art Volume 9: Muse, a national and international juried show that this year includes work from Australia in addition to books from American states ranging from Hawaii to Massachusetts. The Southeast is amply represented even though this exhibition, like the fine arts show for the arts festival, has expanded far beyond its local origins. One of the original founders of the Book as Art exhibitions, Dorothy “Dot” Davis Moye, died some weeks before the current show opened, and Muse is dedicated to her memory. 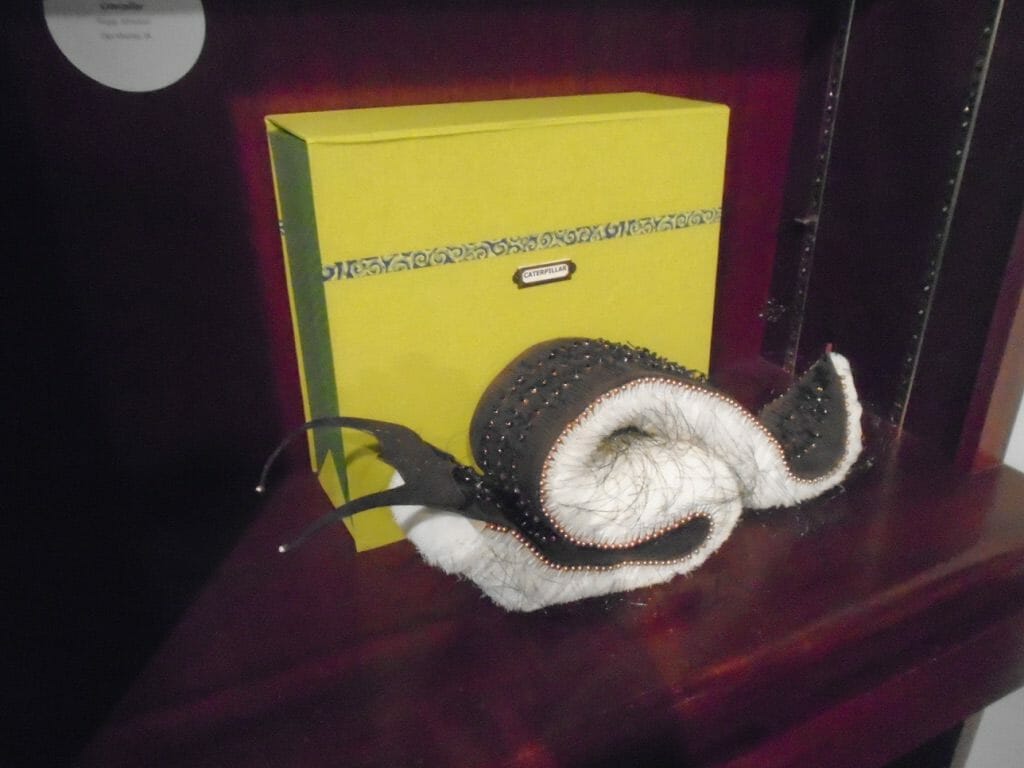 As always, some of the volumes stretch the meaning of “book” almost to a breaking point. Peggy Johnston’s “Caterpillar” is a sculptural object that consists of 270 sewn book signatures with pages made from crinoline fabric, attached to a leather spine that curls to form the caterpillar shape. Angaea Cuna’s “Half Leaf (Ope’Ape’A)” is a book that unfolds into a sculptural representation of Hawaii’s indigenous Ope’ape’a or hoary bat. Tracey Millard’s “Brain Map” is a hybrid of both modes, consisting of complex assemblages inserted into cut-out spaces in a conventional book.

A fair number of books deal with the cataclysmic year of 2020. Katie Delay’s “Say Their Names” lists the names of wrongfully killed persons of color, page by page, until the “Names” from the “Say Their Names” slogan finally explodes off the page as a pop-up cutout on the concluding page spread. Mari Eckstein Gower’s “Pandemic Dreams” juxtaposes news reports of personal responses to the pandemic with her own dream-influenced paintings. Jan Dove’s “Chronicles in the Time of Corona” is a collage of her own digital drawings, prints, photographs and writings. Nabil Gonzalez’s “Who Are You?” is a dark composition of monotypes, charcoal and actual sand that is a meditation on conditions on the U.S.–Mexico border. 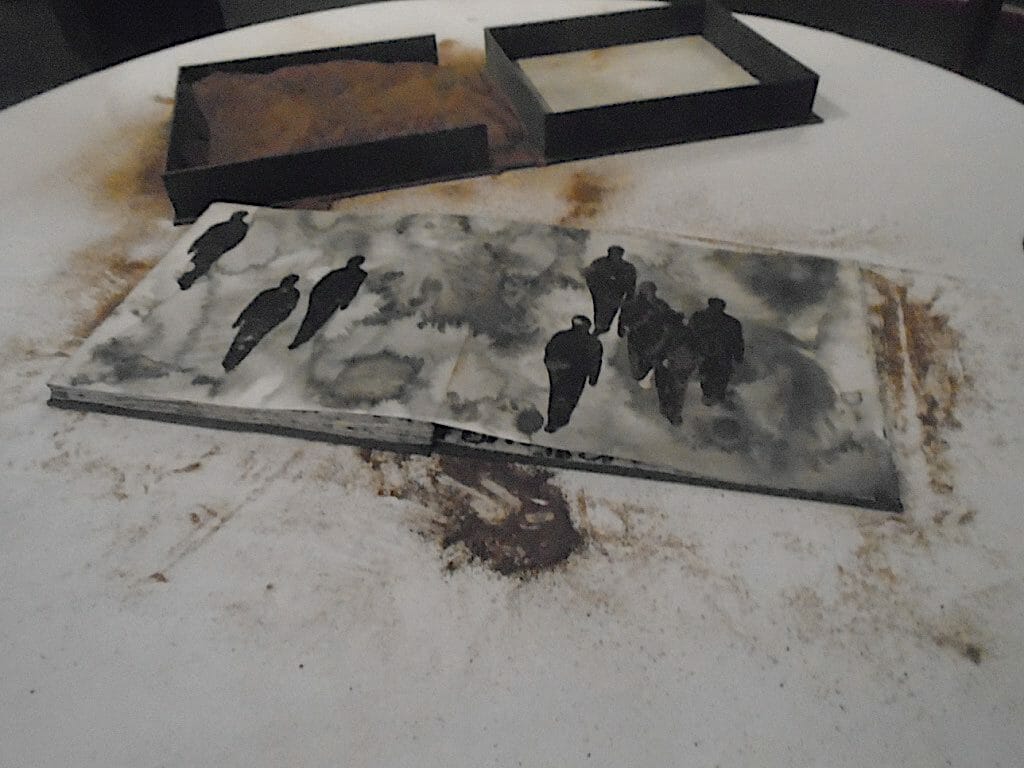 Conditions at the U.S.–Mexico border inspired Nabil Gonzalez’s dark and moving “Who Are You?”

Although the overall show defies categorization, there are also a surprising number of books that deal with the contents of other books. Three works from Carol Kunstadt’s “Pressing On: Homage to Hannah More” series are inspired by a proto-feminist tract of 1791 titled “An Estimate of the Religion of the Fashionable World: By One of the Laity.” Emily Martin offers a feminist unpacking of Shakespeare’s “Hamlet” in the amusing cartoons of “Gertrude Has a Few Questions,” and a very different questioning of “King Lear” in “The Tragedy of King Lear.” Ashley DeVan offers a far more visually lyrical version of female empowerment in her unconventionally illustrated version of “The Seven Ravens,” a folktale from the Brothers Grimm in which a girl is not the damsel in distress, but a heroine who saves her imperiled brothers through a magic-laden quest.

I am tempted to go on with these descriptions, but the books, accompanied by statements by their creators, are all elegantly illustrated in an online catalogue on the Book as Art web page. However, I feel I must call attention to Sara Quinn’s “Go Inside,” described by the artist as “an unlearning book for kids and grown-ups,” simply because its lessons about looking deeply at systems outside and inside are echoed in so many other books in this exhibition. As Quinn’s guided meditation for children and their elders has it: “Go inside your own darkness. Drift through the dark to a place where you can feel everything growing.” One way or another, the “Muse” of The Book as Art v. 9 carries the same message. 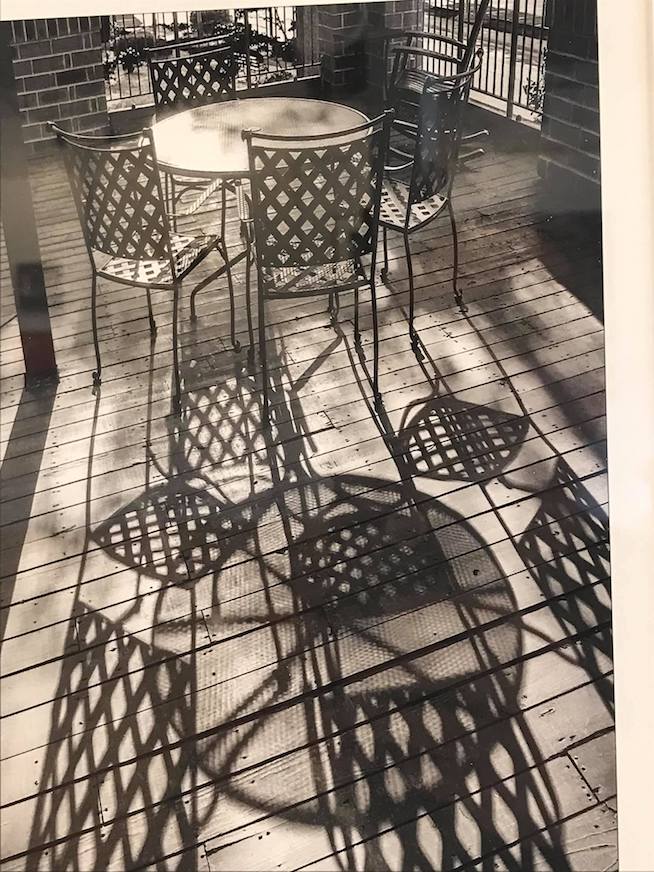 Ilia Varcev’s “From My Balcony” is one of the many photos he took from his home during the Covid shutdown.

The photographers in Close to Home, a small show at 378 Gallery through September 25, may offer similar advice, but in their case the journey was one forced upon them by the pandemic lockdown and its aftermath. Curator Bill Gillespie has put together images by just over a dozen well-known photographers, currently or formerly based in Atlanta, in an exhibition inspired by Ilia Varcev’s startling demonstration of the variety of photographs that can be made from a single location, in his case the balcony of his retirement apartment.

This body of work in the upstairs gallery will be joined downstairs for one night only, 7 to 9 p.m. September 18, by a conceptual performance and world premiere of a 2020 video by Christopher Hall, titled “World Champion of Art.”

Hall’s celebration of his impossible list of accomplishments and honors is plainly satiric, but the sheer extravagance of the skillfully produced video effects, combined with a planned mock press conference and (reportedly) actual souvenir sale table at the premiere, may remind some of the condition that Jean Baudrillard and Umberto Eco defined, in which simulation and reality blend into a hybrid in which the two become difficult to disentangle. Even the absurd title “World Champion of Art” is an allusion to the Olympic art competitions that accompanied the Olympic Games for their first 60 years, in which the gold medalists were presumably world champions of art.

Hall’s 12-minute and 51-second video might also be considered an imaginative expansion of the genre of the American tall tale, since it crushes together fast paced send-ups of everything from celebrity journalism to Joseph Campbell’s hero’s journey (since Hall makes such a journey in the video, a greatly exaggerated version of his actual travels). The relative disparity between the modest scale of the video, however well executed, and the consciously ludicrous celebrations surrounding it fit into a great American tradition of hucksterish braggadocio that others have employed often enough to more serious ends. Happily, this time the ends are, apparently, artistic.