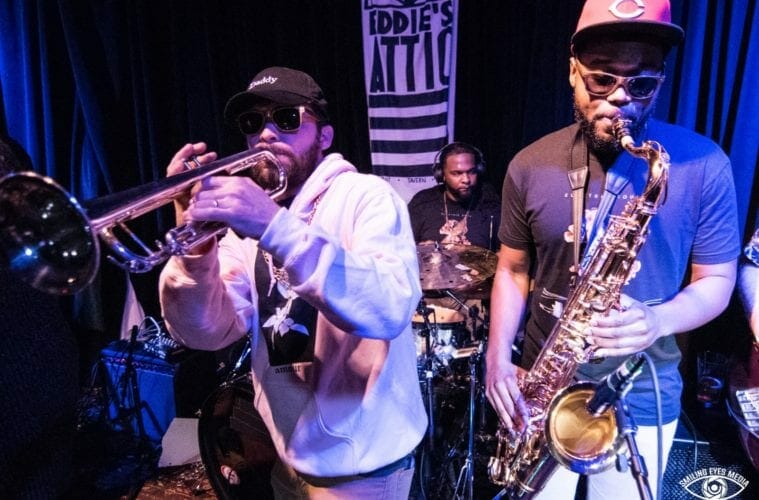 Fusing platforms of classic soul and R&B with EDM music, Citizen Gold creates a self-described genre of electric soul. “Angel in Black,” recorded as part of an ArtsATL trial series of live sessions, keeps listeners moving and shaking with every bass drop and horn feature. Vocalist Daniel Goldberg, trumpeter Jonny Etheridge and saxophonist Reggie Leigh are a force to be reckoned with on this one. The seven-part group — which includes DJ David Purcell, guitarist Ian Hunter Rowland, bassist Mike Hatton and drummer Alvin Jones — comes together from various backgrounds and political views. “I really hope that somebody finds the message that they need to hear to help them get through the day,” Goldberg told ArtsATL last year. “I really want to bring people together and tell them that no matter how different we are, we’re still capable of working together and overcoming our differences.”

BROOKLYNN: “i hate it here”

Opening with a melodic and soft piano, Atlanta’s Brooklynn instantly draws audiences in. She opens her mouth and the heart-wrenching entrapment is complete. While “i hate it here” is full of melancholy lyrics like “There were bruises left in history” and “The people that tried to break us / They only feared us,” one can’t look away. In her self-described Afro-grunge, the beauty lies within the pain.

Isaac Hayes lived in Atlanta for 20 years before returning home to Memphis in 1992. Though best known for “Theme From Shaft” and sultry, iconic albums such as Hot Buttered Soul, Hayes co-authored with David Porter some of the most popular songs of the ’60s for Stax Records: “Soul Man,” “Hold On, I’m Comin’” and “When Something Is Wrong With My Baby.” Hayes, known as “Black Moses,” went on to become an in-demand actor and then had a third career lending his voice to the character of Chef on South Park. Hayes was inducted into the Georgia Music Hall of Fame in 1994, and died in Memphis in 2008. This dynamic version of “Theme From Shaft,” performed at the Glastonbury Festival in 2002, is our vintage track of the week.