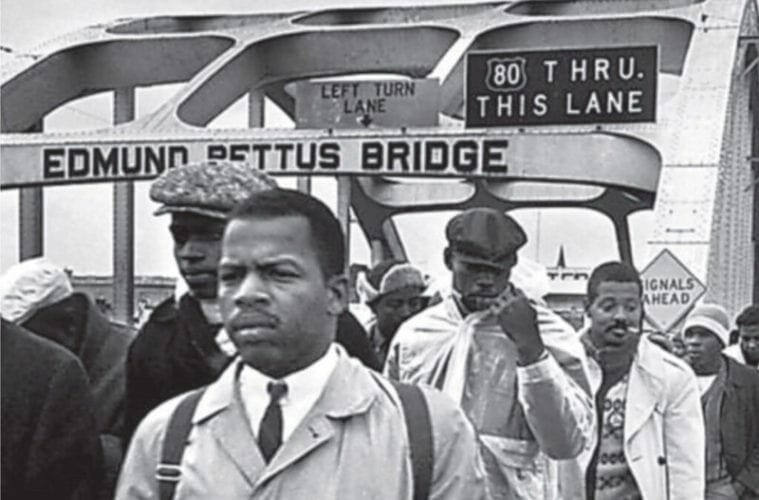 John Lewis in his activist days, on the Edmund Pettus Bridge between Selma and Montgomery, Alabama, in the 1960s.

Timely “John Lewis: Good Trouble” reminds us all of the power in dignity, perseverance

It’s a commonly shared belief that bad behavior is easier to depict than good. Satan steals all his scenes in Milton’s Paradise Lost and Iago is a much better part than the title role in Othello. The easy attraction to malfeasance might also explain the hundreds of hours of free press Donald Trump received from media outlets during his too-crazy-for-fiction presidential campaign. A refutation of that trope is handed to us by John Lewis: Good Trouble. The documentary from director Dawn Porter, now rentable on streaming platforms, is a demonstration of how mesmerizing — exciting, even — a display of one man’s peaceful dignity and moral rectitude can be. (The film can be seen on the big screen at 9:25 p.m. Sunday at the Plaza Theatre Drive-In at Dad’s Garage Theatre Company.)

Representative for Georgia’ fifth congressional district since 1987, Lewis may have made his greatest impact as a much younger man. A native of Troy, Alabama, he was flummoxed when applications to enroll in his state’s universities were ignored. So he wrote an up-and-coming civil rights activist named Martin Luther King Jr. for assistance in suing the university system. In response, King (who would forever call him “the boy from Troy”) sent him a round-trip bus ticket to meet him in Montgomery.

Due to his mother’s anxiety about repercussions against the family, Lewis didn’t sue. He went to Fisk University in Nashville instead, and became chair of the Student Nonviolent Coordinating Committee, whose principles have been observed these decades later by many of the peaceful Black Lives Matter protesters we’ve seen in recent weeks.

SNCC targeted the segregated lunch counters of the city, and Good Trouble is full of good, troubling footage from those days — waitstaff hurling milkshakes at polite, seated protesters and pile-on mob beatings from angry White men. These sit-ins led to Nashville becoming the first city in the South to allow integrated dining.

Good Trouble underlines the problem with well-meaning supporters of the early 1960s, who cautioned that change had to be slow, had to be incremental — don’t rock the boat. The problem was summed up in the title of King’s 1964 book, centered on the Birmingham campaign: Why We Can’t Wait.

Lewis was one of the six organizational leaders responsible for the 1963 March on Washington and, two years later, was among the marchers trying to cross the Edmund Pettus Bridge from Selma to Montgomery who were assaulted and trampled by riot police. He went to the hospital, but never raised a fist against his oppressors. As South Carolina Rep. James Clyburn says in the film, “I don’t think I could have taken what he took.” “I don’t think I could have taken what he took,” South Carolina Rep. James Clyburn says of Congressman John Lewis. (Photo by Mark Humphrey)

Rather than being a staid documentary about a long-ago figure, Good Trouble bridges the gap between the here-and-now and the way-back-when with startling immediacy. Times being what they are, Lewis’ humane, righteous leadership seems especially appealing. (As a point of perspective, I was shocked to feel a tingle of nostalgic warmth during footage of George W. Bush — a president I thought, at the time, couldn’t be a worse leader for the nation.)

Director Porter’s film is as unflashy, quiet and resolute in its approach as Lewis has been in his life. This doesn’t get in the way of his great story. If anything, the documentary makes you want to know more about the man — a miniseries, say.

One of the talking heads interviewed (including the Clintons, Alexandria Ocasio–Cortez, Nancy Pelosi and generally people on the same side of the aisle), the late Rep. Elijah Cummings, to whom the film is dedicated, laughs about all the times people swarmed him on the street thinking he was John Lewis. He often played along.

“You know what? I am so glad that they mistake me for a great man,” he says. Yes, and amen.