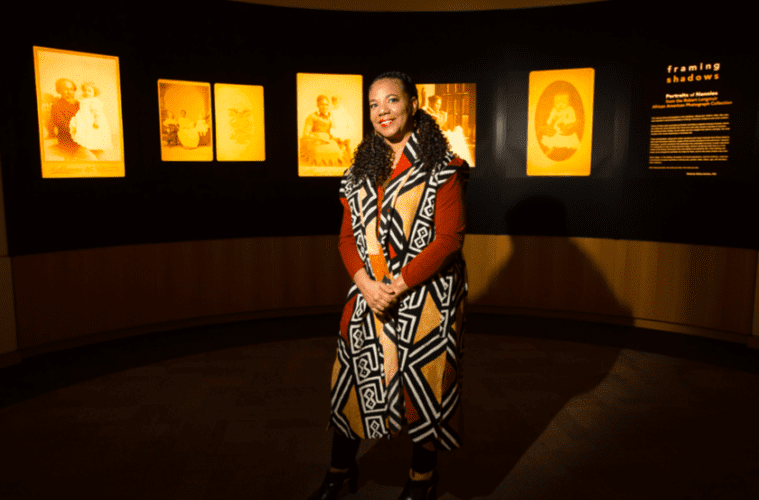 In Our Own Words: Kimberly Wallace-Sanders, Gregor Turk and Trudy Nan Boyce Gregor Turk is an artist known for his public art installations, ceramic sculpture, photography and mixed-media constructions. His work is in a permanent installation at Hartsfield-Jackson Atlanta International Airport and is included in the JP Morgan Chase Art Collection, High Museum of Art and numerous public and private collections.

Last year’s New York Times publication of Nikole Hannah-Jones’ “1619 Project” and companion essays were profound and gave me a better understanding of the depth of systemic racism and the ongoing residual effects of slavery. Conversations about context, meaning and embedded symbols in our monuments and public art strike a particular chord with me. Only in the past few years can I envision the demise of the most egregiously conceived sculpture in our state and perhaps nation: the Confederate Memorial carving at Stone Mountain.

Having served on the board of directors of several arts organizations in Atlanta through the decades, an ongoing issue continues to be a lack of board diversity/equity/inclusivity. While identifying and inviting BIPOC has been and is being addressed, the problem remains under-resolved as does the implied ownership of “inviting.”  Imbalances in terms of gender, age, orientation, occupation and organizational affiliation tend to ebb and flow, but diverse racial representation remains a critical factor.

I do feel more optimistic [about overcoming anti-BIPOC racism], especially since the protests have initiated increased awareness (more so by Whites — as it’s my assumption that African Americans have long been aware of issues presented in the protests, unlike many Whites), conversation, and most importantly some indications of change. As to why I feel optimistic, I think MLK Jr.’s echoing of Theodore Parker’s words sums it up best: “Let us realize the arc of the moral universe is long, but it bends toward justice.” Kimberly Wallace-Sanders is associate professor of American and African American Studies at Emory University. She is the author of Mammy: A Century of Race, Gender and Southern Memory (University of Michigan Press, 2007) and is completing work on a book called Framing Shadows: Portraits of African-American Women with White Children.

I have encountered racism as a scholar and as an educator but not as a curator. In 2007, I was trying to get my second book, Mammy: A Century of Race, Gender and Southern Memory, published. A Southern White male editor at Duke University Press berated me for writing what he perceived to be a negative critique of the mammy-charge relationship in my book. He told me that he had a mammy growing up and knew how a “mammy book” should be written. He said my book should be a loving tribute to the “colored woman” whom he knew, “loved me more than she loved her children.”

As faculty, I faced racism from colleagues who accused me of showing favoritism to and lowering my standards for students of color when my students were finishing their degrees and getting grants and employment faster than other students. My White colleagues were not challenged with similar accusations when their students succeeded.

Perseverance, personal and professional commitment always help me to rise above racism. At a particularly low point in this process my older son Isaiah, who was 6 or 7, told me:  “Bob Marley says don’t give up the fight.” At that moment, I realized that he was watching me and I needed him to see me face this challenge and overcome it.

I am hopeful about the future. I am a scholar, an educator and the mother of two sons and it is important for me to have hope about my future and about their future. I can’t give up; untying the tangled knots of racism and sexism — of inequality —  has been my life’s work. This is bigger than me, I am part of a revolution that is larger than my own life.

But I am also weary. James Baldwin directed this response at White Americans who told him that racial progress takes time: “You’ve always told me it takes time. It’s taken my father’s time, my mother’s time . . .  my niece’s and my nephew’s time. How much more time do you want? For your progress?” I feel the same way. Trudy Nan Boyce received her Ph.D. in community counseling before becoming a police officer for the city of Atlanta. She was awarded both a Georgia Author of the Year Award and a Pinckley Prize for her debut novel, Out of the Blues. She is also the author of Old Bones and The Policeman’s Daughter.

My novels are set in Atlanta. I have lived in the metro Atlanta area for over 60 years. I’ve lived in town since 1976. I policed the city for more than 30 years. I obtained three degrees from our downtown university, Georgia State. I thought I knew the city. But when I began doing research for my novels I gained an understanding about not only the city, but of this country. Atlanta was built by the railroads. So, needing to know about that history, I visited several museums. I asked the docents, “Who were the people who cleared the land and laid the tracks before and after the Civil War?” They didn’t know. When I began doing book events I’d ask the audiences, “Who were the people who cleared the land and laid the tracks for Atlanta’s railroads?” I spoke to high school students a couple of years ago and asked the racially diverse students the same questions. Of course, slaves built the railroads before the Civil War, and convict labor, mostly comprised of re-enslaved Black men, rebuilt the railroads after the Civil War. But most White people never had given it any thought. And the high school students of all ethnicities didn’t know either. This kind of ignorance, including my own, isn’t accidental. White people stole the fruits of the labor of Black people. And after the Civil War and after the Civil Rights Movement White people of privilege have continued to deny people of color access to justice and resources.

What gives me the strength to rise up despite racism? What choice is there? I’m a grandmother determined to make this world a better place not only for my grandchildren but also for all the children. For it is only together that we can move forward.

These days I easily fall into despair. Then I remind myself that it’s up to me to bring a spirit of empathy to the conversations. My hurt is small compared to the pain in our communities. I hurt for the citizens and police of my beloved city. I’m working on finding how I can best go about helping the healing process.