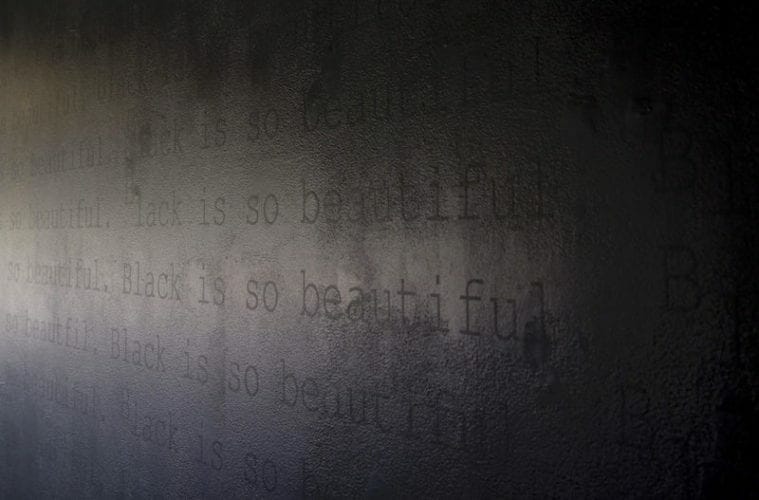 From the "Black Is Beautiful" exhibit at Atlanta Contemporary. Look closely and you can see the words "Black is so beautiful . . ."

Paul Stephen Benjamin creates work that is black (the color). And he creates work that is Black (culturally). Neither should be considered a revelation. Yet, in a contemporary culture where blackness is sometimes positioned as underprivileged or underserved or marginalized, Benjamin’s work emerges from a place so as to not refute or tear apart that world but to offer the reality of an existence within that same world with blackness at its center.

Artist and educator Theaster Gates once postulated the notion of a “black space” and his attempts to preserve it. Benjamin’s work resides there, with nuance and vigor and love. Last October, Benjamin was awarded the $50,000 Hudgens Prize. The week prior, he got a $25,000 grant from the Joan Mitchell Foundation. At the moment he’s included in the group exhibition State of the Art 2020 at Crystal Bridges Museum in Arkansas, available to visit virtually because of Covid-19 and scheduled to wrap at the end of May. His show Black Is Beautiful, at Atlanta Contemporary, may soon be available virtually and possibly in person before it closes August 9. His solo Hudgens Prize show is scheduled for August–October.

To say that Benjamin is having a career moment would be an understatement. But if you’ve been paying attention to his steady ascent in recent years, you’re not surprised. A few months after his Hudgens win, Benjamin was on the phone in his Scottdale studio on a chilly morning, coordinating a package drop with a delivery driver trying to navigate his way from Hartsfield-Jackson Atlanta International Airport.

Remnants of Benjamin’s past exhibitions — he paints, creates video installations and does assemblage and sculpture — are stuffed everywhere in his studio, sprawled across the floors and filling nearly every wall and corner. On the surface, through titles or objects, his work tugs at the threads of American patriotism. Combined with an emphasis on the color black, the art may seem to read easily as political, perhaps as protest, but not necessarily either alone, with space between for viewers to present and question their own assumptions.

“There is this push and pull for people who view the work of whether it’s patriotism or protest. I try to lie in-between there,” says Benjamin, who’s in his early 50s. “I consider myself to be patriotic. Whenever I’ve traveled throughout the world, one of the things that’s most important to me is getting back home. No matter how much you enjoy somewhere else, I always want to get back to the ground I’m familiar with.”

Continuing, he says, “The patriotism is really an individual conversation. I can’t determine or dictate what patriotism means to anybody else. What I do within the confines of my work is not necessarily to try and answer questions but to present questions . . . present opportunities for dialogue, whether it’s in the flag works or God Bless America or O Say. There is this recurring theme showing up in my work.” From the installation “Reinterpreting the Sound of Blackness” at Savannah’s Telfair Museum (2018).

Born in Chicago into a family where military service was common, Benjamin was raised in a milieu that presented and affirmed the possibilities of black existence. These black spaces (as embraced by Gates, a fellow Chicagoan) created a baseline black existence in everyday activities and affirmations, an existence that, reflected in Benjamin’s work, begs for no further explanation and ultimately frees the art from the effort of having to justify the importance of the narrative. The black narrative exists as the norm, even as Benjamin’s use of the black color palate evokes and evolves.

“Chicago is probably one of the most diverse cities in the country, but it’s also one of the most segregated,” Benjamin says. “So, in my existence growing up . . . I didn’t have to think about blackness in that sense, in that I was surrounded by it . . . my life was blackness. Every encounter in my daily life consisted of that reassurance . . . that network of how I interacted. On the south side of Chicago, a lot of people don’t leave that space. You might travel to other black spaces, but sometimes people don’t go downtown. Growing up, where I went to school, where we went to church, where we ate . . . was all in that space.”

Since receiving his Master of Fine Arts degree from Georgia State University in 2013, Benjamin has been deliberate in refining his approach to his craft, with a strong balance between idea and aesthetic. And the recognition has been steady, including prizes and fellowships from MOCA GA, South Arts, the Forward Arts Foundation and Artadia that ultimately set the stage for his Hudgens Prize win. He’s had solo and group exhibitions in Atlanta at Gallery 72, the High Museum of Art, MOCA GA and the Temporary Art Center in Atlanta; in Savannah at the Telfair Museum; in Washington state at the Tacoma Art Museum; and at The Studio Museum in Harlem, among others.

“My art practice has always consisted of looking at the past as it relates to the present and future,” Benjamin says, “mining history that begins with the civil rights movement is the origin of my research. My work frames protest and patriotism side by side.”

“I have known Paul’s work for almost 15 years,” says Ife Williams, formerly executive director at the Hudgens Center. “Some artists, you know their work for 15 years and you know exactly what you’re going to see when you go. [With Benjamin,] I have no idea what will be next. All the work is going someplace, and you just have to wait and see it. We know thematically that it will be consistent . . . but the range . . . I can’t even guess what we’ll be looking at in a year. That’s rare for an artist at this point in their career.”

An artist can change while staying the same. Yet, whatever the future holds for Paul Stephen Benjamin, it likely will always contain foundational elements of his Chicago past as he creates more room for questions, dialogue and contemplation. And hopefully, by now, neither should be considered a revelation.