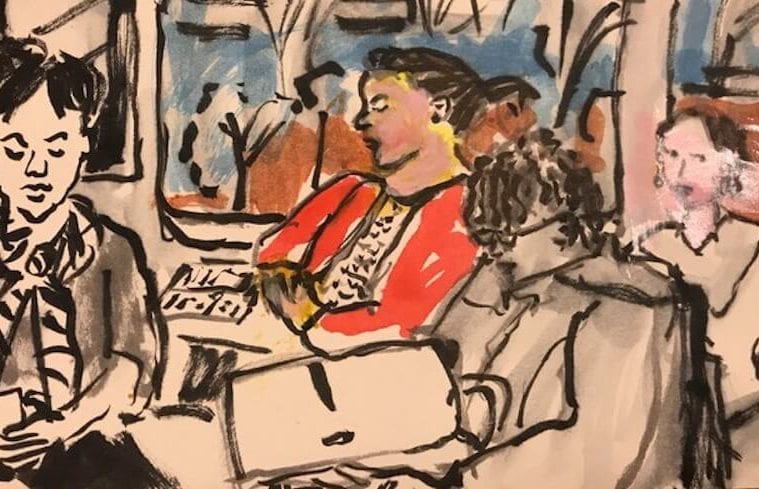 Atlanta artist Ana Guzman gets inspiration from her childhood memories of Havana, and her daily MARTA commute

If Ana Guzman were a punctuation mark, she’d be an exclamation point. If she were a gesture, she’d be a bear hug. And if she were a musical genre, she would be salsa. The same can be said of the vivid paintings and sketches featured in her upcoming solo show Viva! at Marietta’s dk Gallery. The exhibition is a compilation of Guzman’s memories of Cuba, the place of her birth and her studies of Atlanta, her adopted hometown since 1982.

Though her depictions of Cuba are lively and celebratory, Guzman says her departure from her island home in 1961 was akin to an amputation. She was just five years old when her family’s exile was precipitated by air raids, confusion and hushed conversations among her elders. She remembers it all, including the scene at the airport on her last day in Havana. “My mother tried to explain that we would come home when Castro [was no longer in power],” she says. “But I was a big crybaby and did not want to leave my dog Tompy behind. Things got so bad by the time my mother [who was four months pregnant with her third child], brother and I had to clear customs, the agents could not take my bawling another second and were like, Get that crying kid out of here! Just GO!“ The divine intervention spared Guzman’s mother from having her luggage ransacked by immigration officials, and she was able to leave with all of her jewelry and family heirlooms. After a brief stay in Queens, Guzman’s father, an engineer, got a job in Lebanon, Pennsylvania, and the family relocated. Guzman remembers feeling like an “oddball, as the only Cubans in town.” At home, her parents maintained their Cuban culture through language and cuisine, but Ana felt self-conscious at school and wanted nothing more than to assimilate and blend in with the crowd.

Never without a sketchbook, Guzman began documenting everything in her field of vision, from landscapes to flowers to whatever was hanging on the walls during hotel stays on family vacations. The daily exercise helped her make sense of her new home, but Cuba remained her muse. Cherished memories of the island’s colonial architecture, landscapes, people and mid-century car design are always reflected in the colors, energy and flavor of her depictions of Old Havana. By the same token, she acknowledges that her 20th-century dreams of Cuba do not always square with 21st-century realities. “I am not naive,” says Guzman. “I know there is dilapidation and decay [in Havana today], but the architectural gems and people are an ongoing source of inspiration for me as a painter.”

The paintings also serve as a touchstone for immigrants who understand the duality of feeling homesick while living their American Dream: some of Guzman’s biggest collectors are Cuban Americans whose stories parallel her own.

When Vilma Kaufmann spotted Guzman’s La Vida Cuba ~ Pink Car 5 in the window of dk Gallery last summer, the large-scale painting of a pink, classic car was so obviously the work of a compatriot, “it left her tearful and nostalgic,” according to her husband Paul. Four months later, he surprised her by purchasing the canvas as a gift. Guzman agreed to meet the couple for the big reveal, only to discover that she and Vilma both hailed from Marianao, a suburb of Havana, and that they both left home at the age of five. Vilma says she spends more time in her living room these days, “just so I can spend time with my big, pink car,” and lovingly describes the painting as “my little piece of Cuba.” Guzman calls David Fertig, her first painting teacher at Philadelphia College of Art, her biggest influence. Fertig’s mantra was to avoid thinking of the canvas as a precious surface only worthy of perfection. He cautioned against putting too much forethought into preparing a canvas, saying that most artists’ best work was sketched on newsprint. And he taught her that overthinking her approach could intimidate and hamper freedom of expression as a painter. Guzman says those ground rules still guide her hand today.

“My best work is done in just a couple hours,” she says, while pointing out that 50 years of practice informs every mark she makes. “I can silence the OCD. I know when to stop. And I don’t feel compelled to fill up the entire canvas simply because I can.”

Seven years ago, after raising two children with her husband, Julio, and running a successful Cuban restaurant, Coco Loco (where she painted the colorful murals that decorated the walls), with him for 23 years, Guzman decided to give art a place of primacy in her life. She moved her art practice from her kitchen table to a studio at the Goat Farm. On the first Saturday of each month, she shares the space with a cello ensemble. The cross-pollination has resulted in a series of paintings that will be shown for the first time in Viva! Nan Kemberling, who founded the amateur ensemble, says, “It’s cool to have documentation of what we’re doing thanks to Ana’s paintings of us in rehearsal,” and likens Guzman’s percussive, declarative, dynamic-yet-delicate style to that of “a jazz musician’s brush strokes on the drums.”

In an ideal world, Guzman says she would wake up, run to the Goat Farm and paint seven days a week. But in fact, her weekdays are spent in an office tower downtown, where she works for the IRS. Last summer, she started carrying a sketchbook to help pass the time on her daily commute on MARTA. The idea was to supplement her weekend studio practice, but the result has been a revelation personally and professionally.

“There are so many prejudices and misconceptions surrounding public transportation in Atlanta,” says Guzman, “but I see MARTA as an incubator for camaraderie. I’ve found commonality with fellow-passengers, and I get to witness their kindness, elegance, humility, shyness, reserve, curiosity and great style on a daily basis . . . Older people will read an actual book or newspaper. They are fine being unplugged, sitting still and daydreaming, whereas younger people are really attached to their mobile devices, earbuds, online games, streaming music and podcasts. What they all share, on the other hand, is a genuine sense of excitement and surprise upon realizing that a total stranger would consider sketching them.”

Speed is critical when drawing on MARTA, where Guzman says she can capture a subject within one or two stops, and portability is a plus when selecting her materials. She favors Pentel brush tip pens and fills them with custom-blended colors. Guzman’s son has dubbed her The M’ARTIST, and one rider referred to her series as The MARTA Chronicles, yet the artist didn’t put much stock in what she regarded as a hobby until artist Maggie Davis, who also keeps studio hours at the Goat Farm, offered positive affirmation. “My jaw dropped when Ana shared her sketchbooks with me,” says Davis. “Artists sometimes overlook the value of the small things, and it’s easy to dismiss a sketchbook, but it’s where the heart is for every artist. These portraits are so human, and genuine and raw. They are not a generalization . . . they are accurate, and they reflect the daily life of so many people here in our city. Drawing on a train is an incredible talent, but more importantly, Ana’s elevating the mundane to the level of an art practice is a lovely way to remind people that each of us is making a contribution, and that daily life is important.”

“In art class, the artist directs the model,” agrees Guzman. “But on MARTA, life is directing me.”

Viva! opens with a reception on Friday, April 6, at 5 p.m. at dk Gallery at Marietta Square. Guzman will give an artist’s talk on Saturday, April 21, at 2 p.m.