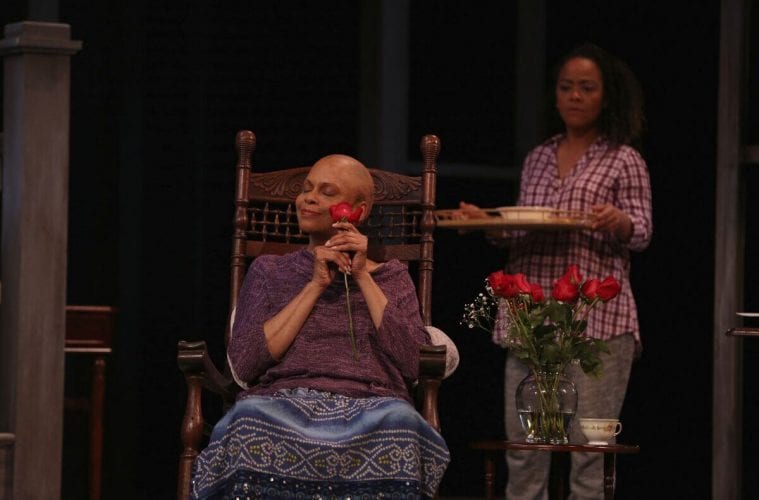 Review: Cleage’s “Hospice,” “Moon” share stories that women only tell each other

I almost never see a play twice before I review it, but the opportunity arose this week, and in this case, a return visit seemed warranted. The women in Pearl Cleage’s Hospice + Pointing at the Moon have a lot to say. The show, part of the Alliance Theatre’s on-the-road season, runs at the Southwest Arts Center through April 15.

I should technically say that I returned to the plays, because according to the playwright, the evening consists of two one-act plays, rather than one play with two very different acts. Some might beg to differ with the playwright’s own definition, though. The plays share characters and a setting: they feel distinct, but they’re not so disconnected as all that.

In the first half of the evening, Hospice, we meet mother and daughter Alice (Terry Burrell) and Jenny (Tinashe Kajese-Bolden), and in some ways, they are meeting each other as well. Alice is a talented and successful poet who married young but abandoned her husband and daughter, then aged 10, to pursue her art, career and an independent life. When the play opens, it is 1983 and daughter Jenny is 30 and pregnant, and Alice, diagnosed with terminal cancer, has returned from the glamorous life in Paris to die in peace at the family home in the West End.

Although Cleage created Alice early in her career (Hospice originally premiered in 1983), she’s a somewhat unusual main character for the writer. Like Evey from What I Learned in Paris, Alice has lived a daring, Bohemian life with a deep connection to Paris, but unlike Evey, Alice is not immediately or consistently lovable. She is prickly, cruel and full of bile, refusing to act the part of the conciliatory, maternal fount of wisdom that the situation (and her daughter) seemingly call out for. One of her only comforts is playing an old record of Leontyne Price singing the “Un bel di” aria from Madama Butterfly, a song that punctuates the action and opens the show. (Our first sight of a bald and disrobed Alice, totally transported by the music, has an eerie, almost sci-fi, very unPearl-like edge to it.) The mother and daughter relationship is full of twists and knots . . . and love.

Jenny, who has lately lived in the West End house, isn’t entirely welcome there once Alice returns to what is technically her home in order to die. But Jenny is days, perhaps hours, away from giving birth and insists she can’t return to her own home and its problems, so she isn’t particularly easy to kick out. In these unlikely circumstances, Jenny eventually breaks down at least some of Alice’s spikey resistance, and though it can’t be said things have a happy ending, the women do eventually come to have a better understanding and deeper respect for each other.

In the evening’s second half, Pointing at the Moon, we jump ahead to the present day: Cleage wrote the second play recently as a sort of sequel to the first, and it is a world premiere. Jenny now has legitimate ownership of the West End home, and in a simple but deliciously head-spinning and empathy-shifting innovation, Burrell plays the older Jenny in the evening’s second half. The seemingly obvious subsequent choice would have been for Kajese-Bolden to play Jenny’s grown daughter, born at the end of Hospice, but Cleage avoids this, perhaps because it is the obvious choice. Instead, Bolden plays younger neighbor and friend Isabel.

Through Isabel and Jenny’s conversation, we learn a few more details about Alice: she died shortly after the action of Hospice, and asked for her ashes to be scattered into the Chattahoochee River, a request which Jenny obliged. And most importantly, Jenny’s understanding of her mother’s difficult, fraught choices has been lasting and profound: she named her daughter, now an (offstage) independent adult, after her mother.

But the talk in Pointing at the Moon drifts pretty far from the talk in Hospice. Jenny and Isabel have just been to a funeral, the second in two months. They are, somewhat awkwardly, the only two people left in a close and neighborly four-way friendship. Their talk, much abetted by a fresh batch of Manhattans, touches on past and present and potential future, which given the recent election, is naturally pretty grim. Surprisingly, the play’s final speech belongs to the new character Isabel, and the evening ends on a wickedly charming but almost joltingly uncharacteristic ribald note.

Both plays are dialogue-heavy, and it’s a legitimate complaint to say that the plays seem too talky. These are plays in which things have happened, but very little happens. Action consists mostly of making tea or putting on a record. Still, the characters have a great deal to say: the plays require close attention and quiet contemplation (capacities that the characters in Pointing at the Moon memorably lament the passing of). Kajese-Bolden switches roles in the second play, which is set in the same West End home.

The subject of discussion drifts from onstage characters to offstage people, from literature to music to politics, from past to present, and beyond. Some audience members will be better at riding these shifts than others: I actually needed two visits to take it all in. Still, many of the monologues make gorgeous music, even for those who haven’t been following every word, and I especially loved that the first play’s dialogue was beautifully interspersed with literal music. I think the evening will nonetheless take some Cleage fans by surprise: Cleage’s other, more familiar works like Flying West and Blues for an Alabama Sky are full of characters who are easily and instantly lovable, and they’re also full of events. Not so here.

These are intimate two-character plays, and one significant problem with the production is that the Southwest Arts Center, for all of its strengths, is not an intimate venue. The enormous and elaborate set, showing two skeletal stories of a West End home, looks fantastic, but it actually exacerbates the problem of distance, swallowing the characters and giving them too much space (we see a living room, kitchen, bedroom, two staircases, an entryway and part of a porch, most of which are barely, if ever, used). The addition of projected supertitles showing resonant snippets of dialogue, acting as titles to the various sections of the second play, adds nothing but distraction and more distance. I could picture the show going over better in a tiny little blackbox venue; all that’s really needed is a couch and a record player.

Though I normally resist these sorts of evaluations, I suspect the show may strike a deeper chord with women than with men: a friend of mine suggested they’re the perfect plays for mothers to bring daughters to, or vice-versa. As Alice says after finishing a revealing anecdote that her husband had never shared with her daughter: there are some stories women tell each other. Even by the standards of 1983, that’s a somewhat regressive statement, but it’s worth noting that Alice is probably correct — perhaps there are some stories women tell primarily to and for each other. Though men have much to learn by listening in, it’s possible that Hospice + Pointing at the Moon are such stories. In the end, the works may resonate especially deeply with mothers and daughters, but there’s still a moving universality, honesty and originality in the plays’ overarching themes: the need for a home, and the desire for ideas, independence, friendship and identity beyond it.