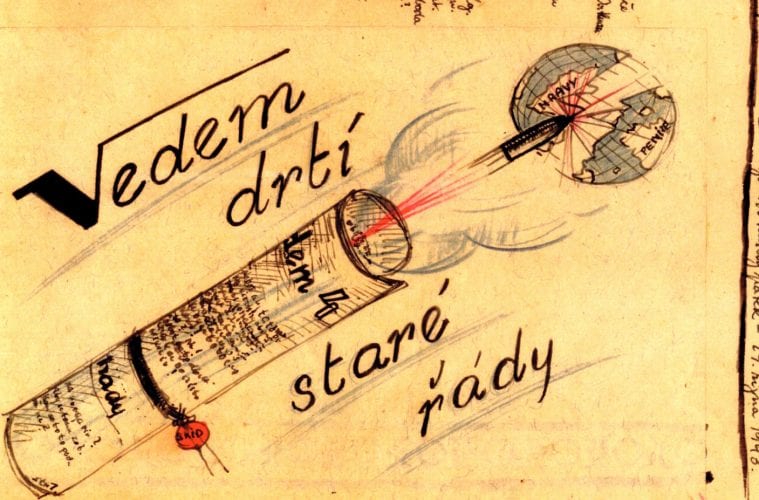 At Atlanta’s Breman Museum, a new exhibition explores “Vedem,” a secret zine created by Jewish teens in a Nazi camp

“Creativity does not perish in the mire,” wrote a teenage boy named Petr Ginz in the early 1940s. “Even here, it sprouts and blossoms.”

Ginz was describing the work of an artist named Berthold Ordner, a blind prisoner in a Nazi concentration camp who fashioned little sculptures out of string and wire, but he could have just as easily been describing the very publication that his words appeared in.

From 1942 to 1944, Ginz and a group of teenage boys who were prisoners in the Nazi camp Terezin, 40 miles outside of Prague, published 83 issues, about 800 pages, of a secret underground magazine called Vedem. The magazine and its creators are the subject of a fascinating and compelling new traveling exhibition, created by Michael Murphy, Rina Taraseiskey and Danny King, and currently at Atlanta’s Breman Museum through March 10, 2019. 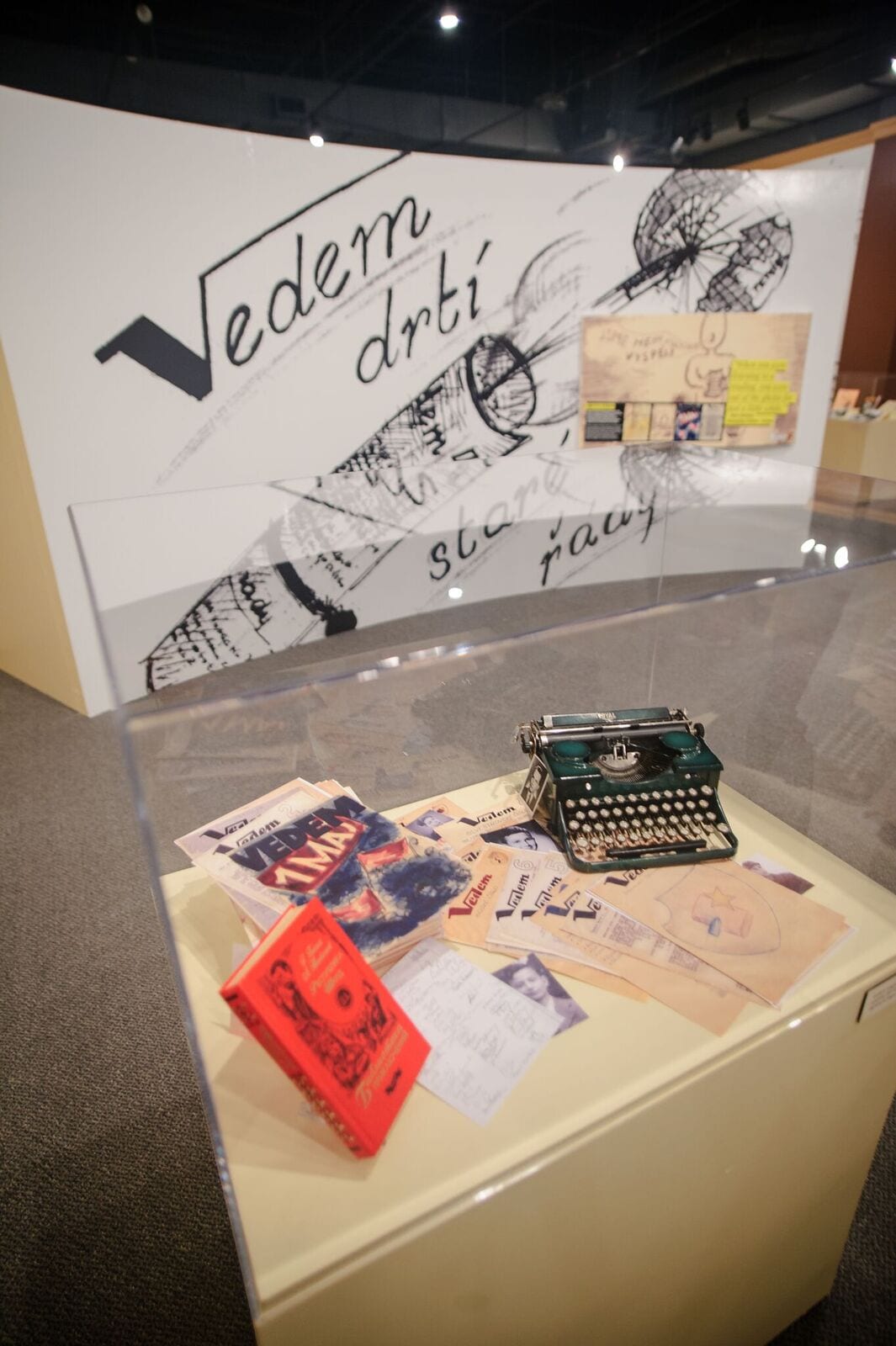 Vedem contained everything from feature profiles like the one that Ginz wrote on Ordner, to comics, poetry, fiction, editorials, reviews, satire, news and opinion. The boys who created it were 13- to 15-year-old Czech prisoners of Terezin (in German, Theresienstadt), an 18th-century fort that was converted by the Nazis into a transit point. Sometimes referred to now as a concentration camp, sometimes called a ghetto, Terezin served both roles, and it was at times used to deceive the Red Cross into believing that such camps were benign Jewish “settlements.” Nonetheless, in spite of its temporary propagandistic role as a sort of show camp, tens of thousands of people died there, some killed outright, others dying from malnutrition, the elements or disease. Many prisoners were held there temporarily before being sent by rail transports to their deaths at extermination camps in occupied Poland such as Treblinka and Auschwitz.

The boys, who had been separated from their families, lived in crowded bunks in a converted school building at Terezin known as Home #1. The young men worked during the day growing food or in apprenticeships in vocations such as plumbing or carpentry. Food shortages, pandemics, deprivation and death were common occurrences.

In the crowded warren-like bunk-filled quarters of Home #1, the boys managed to smuggle various materials to create one issue a week of their magazine Vedem (which translates to “In the Lead”). The boys even found an old discarded typewriter at an early point in the magazine’s life: the first 30 issues were typewritten, but when the ribbon ran out, the remaining issues were written and illustrated by hand. Only a single copy of each issue was made; the copy was passed hand to hand each week, and there was a tradition of a Friday night reading, with a lookout posted to watch for guards.

As the exhibition reveals, the content runs the gamut, but much of the magazine was defiant and satirical. Most writers adopted nicknames. Some wrote longingly of home, and a moving, terrifying first-person account details “How I Came to Terezin.” Other entries are as imaginatively far from the horrors of Terezin as it’s possible to get: “The Tale of Don Herberto-Fischlong” by a writer who signs his name “Fi-rt” is a Mark Twain-style tall tale, and a satirical advice column contains some very teenage-boy-style toilet jokes. 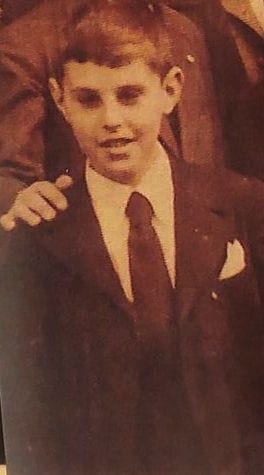 The exhibition also delves into the life and mind of the magazine’s extraordinary creator, editor and illustrator, Petr Ginz. Ginz was born in 1928 in Prague. He was a literary and artistic prodigy, writing his first novel at age eight and creating a total of five novels, illustrating them himself, before he was deported to Terezin. At 14, he was the driving force behind Vedem; he hid its issues in a small shelf behind his bunk. He was killed at Auschwitz at the age of 16.

Contributor Sidney Taussig, who wrote a chilling article in Vedem about his task of transporting dead bodies to Terezin’s crematorium, had the foresight to bury the magazine’s issues in a metal box. He was the only contributor who remained in Terezin until its liberation in May 1945, and he was able to salvage the box and bring it back to Prague. Vedem has since been published and considered in various forms, most often in Czech, but the new show Vedem: Underground is the first major traveling exhibition in the US to focus on the publication.

The exhibition, though it contains relatively few artifacts (the actual pages of the magazine are in a museum in Terezin), manages to tell this crucial, eye-opening and timely story incredibly well. Large displays capture and convey the magazine’s compelling graphic energy, and the wall text is illuminating without ever being overwhelming. A few English translations of the magazine’s content allow visitors to spend some time contemplating the articles and poetry of Vedem, and several videos help illuminate the story of Terezin and Vedem‘s creation. When the show was at the Oregon Jewish Museum and Center for Holocaust Education in 2017, Smithsonian Magazine justifiably named it as one of the top 10 exhibitions worldwide not to miss that winter.

What’s most moving about this incredible show is the gradual understanding that emerges of how the magazine seemed to give the boys a sense of purpose and identity in the worst possible circumstances. Their ability to bear witness, to write, to draw, to laugh and to create remained precious possessions in a time and place when nearly everything else had been taken from them.

The exhibition is also notable for the glimpse it gives into the extraordinary imagination of young Peter Ginz, who clearly admired and was influenced by the popular novels of Jules Verne. A number of his illustrations show the Earth as seen from a distance or from the moon, an implicitly hopeful, forward-looking, broad view of things, and an imaginative one since this is not a perspective that anyone had yet seen in photographs. (Touchingly, a drawing by Ginz of the planet Earth as it might be seen from the surface of the moon was taken by Israeli astronaut Ilan Ramon onto the Space Shuttle Columbia, which disintegrated upon its reentry into the Earth’s atmosphere in 2003.)

To encounter the work of Ginz and the other boys in this exhibition is to come face to face with their incredibly inspiring sense of energy, resistance, imagination, humor and resilience. As Ginz wrote in Vedem, “We want to express our ‘I’. And for that, we sacrifice everything.” The show is absolutely not to be missed while it’s here.