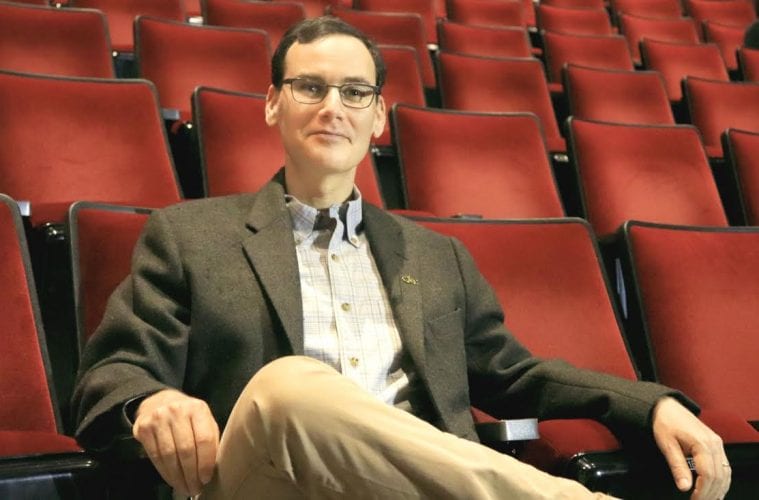 Q&A: Georgia Tech’s Jason Freeman on the marriage of music and technology

Georgia Tech’s School of Music has made waves with its development of innovative degrees that combine the disciplines of music and technology, and has drawn international attention in the field through research and events like the acclaimed Guthman Competition for new musical instrument design (which is now open for 2019 entries).

Jason Freeman is a composer and the new chair of the School of Music at Georgia Tech, where he has been on the faculty for 14 years. His artistic practice and scholarly research focus on the marriage of music and technology, particularly through education opportunities. Freeman is also the executive director of the new music group Sonic Generator.

ArtsATL caught up with Freeman in late summer to discuss his perspectives on Georgia Tech’s School of Music, its music technology degrees and its educational goals, as seen from his new position as its chair. The following dialogue is drawn from that conversation.

ArtsATL: From your years of teaching at Georgia Tech, and particularly from your position as the new chair of its School of Music, give us your observations about both the school’s uniqueness in the scope of the whole city, its character, work and mission.

Jason Freeman: When I arrived, Georgia Tech was really at the very beginnings of an academic program in music. We started at the graduate level with a masters of science program in music technology about a dozen years ago and a PhD program around six or seven years ago. These graduate programs have been incredibly successful, so a few years ago we launched a bachelor’s degree in music technology as well. We modeled this to be unique and appropriate for undergraduate students and really fit in with the culture of Georgia Tech. Freeman says new technology can build a relationship between artist and audience.

For us, music technology is not about standing behind the mixing desk in a recording studio, though it’s important to us that students know how to do that. It’s really about defining what the next generation of music products are, products that professional musicians use to make, edit and disseminate music, to learn about music and to teach music.

Our students have gone into the tech industry, working for companies like Bose, Spotify, Apple and Ableton. They’re getting jobs as software engineers and hardware engineers. We believe that music technology is a really amazing interdisciplinary field where you bring together psychology, electrical engineering and computer science, industrial design and many different disciplines of music and mash this all up in ways that are going to intelligently and responsibly help define the future.

ArtsATL: There’s the question of how technology has changed the nature of music itself, how we listen to it, and our cultural aesthetics. How have these things impacted your own work as composer?

Freeman: I wrote my first pieces of music when I was 10 or 11 years old, and I was very involved in computers and programming computers from about the same age. For me, the struggle was really finding the way to bring these two things together in my practice as a musician.

Many composers turn to technology because they’re interested in new sounds. That’s not really the reason I write music, so that really wasn’t much of an appeal to me. What really pulled me into using technology in musical practice was the opportunity for collaboration, that technology could facilitate and structure the way that different entities communicate with each other in performance, so that I could collaborate with audiences using their cell phones or light sticks to influence the music that is being played in real time; where I could create mobile phone applications or web applications where people could remix, repurpose or recombine pieces.

It really goes back to my fascination with open-form music and ways, as a composer, of making music open to collaboration — radically open — with technologies as a conduit to help make that happen. That’s been a really rewarding practice for me personally because it’s led to artistic results that I couldn’t have created or anticipated myself. It’s helped me to share part of the reason I love music, this experience of making music with a broad swath, regardless of whether your background or training is in music. That in turn has led to my recent work, which is focused on education.

ArtsATL: Georgia Tech has been on the forefront of this marriage between music and science. What has come out of that?

Freeman: It’s important not to be Utopian here and think that technology can solve all of our problems and fix everything, because it can’t. It often creates more problems than it solves. We’re looking at ways to push the field of music forward with technology, not to create new machine-musicians that are going to replace human performers and composers so that we all just twiddle our thumbs while the computers do our work for us, but technology that can amplify human creativity, that can enter into dialogues with us.

I think about my colleague Gil Weinberg’s work with prosthetics in his robotic musicianship group. He’s working with a prosthetic arm for a drummer who lost his arm in an accident that can, through ultrasound, sense what his body is trying to do. I think about the work that Chaowen Ting, our orchestra director, is doing using technology to look at fundamental questions of how we can make classical and orchestral music concerts more accessible to new generations.

ArtsATL: This is all certainly an evolution from the times when Georgia Tech’s music program was essentially a marching band and a glee club and primarily serviced the avocational, recreational musical needs of the broader student body, a mission which it hasn’t abandoned either.

Freeman: Yes, the school really does have a dual purpose, which is that we still serve a huge portion of the student population. More than a thousand students a semester are involved in the school of music and what it does. They’re playing in our marching bands and the orchestra, singing in our vocal ensembles, and it is still very much a place where we can cultivate the love of music amongst all students at Georgia Tech and share that through performances with the Atlanta community. We’re also very dedicated to new explorations about how music and technology are continuing to combine together and how we can raise the bar in these visions we can share of the future possibilities.