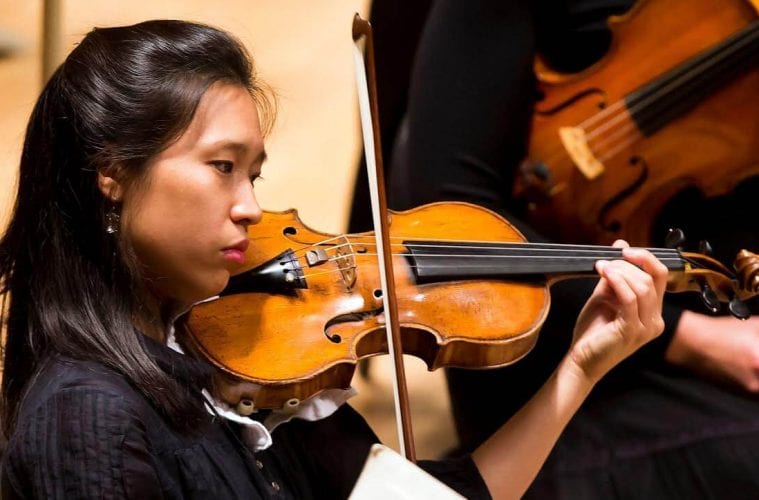 In the world of chamber music, Lee is second violinist of the Johannes String Quartet and Atlanta’s own Georgian Chamber Players. She has performed as a part of festivals such as the Santa Fe Chamber Music Festival, the Marlboro Music Festival, and in chamber music at the Banff Centre in Alberta, Canada.

A native of South Korea, Lee graduated from Conservatoire Superieur de Paris in France with a unanimous First Prize. She holds a bachelor’s degree in both violin and viola performance from the Curtis Institute of Music and a master’s degree from New England Conservatory. ArtsATL recently spoke with Lee about her musical life and her role as principal second violinist of the ASO. The orchestra performs Handel’s Messiah Friday night at Symphony Hall.

ArtsATL: It strikes me that “second violin” is often misunderstood by the public. I’m interested in that, but also how you feel playing the second violin part fits your own personality.

Julianne Lee: It’s true there is a stereotype. People have this belief somehow of second violin being the lesser. There an expression, “playing second fiddle” or “being the second fiddle,” when people talk about relationships and being “the supportive one.”

Just yesterday I was performing some holiday music at a retirement center. One of the questions that was asked after the performance was, “How is it different? Are the players as strong as the first violins?” It’s a commonly asked question. I replied that they’re exactly the same, the audition process is the same. It requires the same skills, though they have different roles in an orchestra.

I enjoy playing in the second violin section because I love that role, being the inner voice. It keeps me always on alert, always at the edge of my seat, because what you’re playing sometimes may be with the first violins, at other times with the violas or the lower voices. I enjoy having that multi-purpose kind of voice. It’s challenging and keeps you aware when your voice should be more heard and how to balance that, when to not be the focus or when to shine.

ArtsATL: In your new role with the ASO, as a principal player, you are the leader of your section. What are some of your thoughts on that?

Lee: Generally, as a section leader you have to be extremely prepared, extremely solid. You have to be in touch with everything that’s going on in the orchestra. I’m in charge of putting in bowings for the whole section. You decide on bowings according to how you hear the phrase. A bowing can change how the phrase comes out. So there are these extra responsibilities that the principal has.

ArtsATL: Then also there’s the need to be able to relay instructions to the section players on the spot, during rehearsal.

Lee: My old teacher, Joseph Silverstein, who was a concertmaster of Boston Symphony, told me that you can do everything by showing. He didn’t speak so much, he said. Instead, if he needed to get everyone’s attention he would sit up a little higher and show. Every leader has their own way. I think it’s a process for the section to get to know the leader and the leader to get to know the section.

ArtsATL: You were associate principal second violin with the Boston Symphony Orchestra. For how long?

Lee: I was a section member there since 2006. Then I also had a temporary position of being assistant concertmaster for a couple years, and then I was second chair second violinist for three years before coming here.

ArtsATL: The viola plays an inner voice too, and I note that you also play viola well.

Lee: Yes. I love playing the viola. I thought about it, and perhaps it’s from my childhood because my older sister and my father, they’re both cellists, so I grew up in an environment of that low register. Perhaps it’s that I just grew into loving it or I’m attracted to that more. I grew up with the Bach Cello Suites. I remember that very clearly; I always heard my father practicing them.

ArtsATL: You’ve been second violin of the Johannes String Quartet for several years and starting this year as part of the Georgian Chamber Players. Do you also find much opportunity to play viola in chamber music groups?

Lee: Yes. I played viola with the Atlanta Chamber Players in September when we played Tchaikovsky’s “Souvenir.” I try to play as much chamber music as I can, every chance I can, if my schedule allows it. I try to play as much viola as I can. I still love playing the viola. I love the diversity and also collaborating with different musicians. I don’t know if it comes from growing up in different places, but I love that constant change and challenge with new things.

ArtsATL: When you were growing up, you moved around a lot?

Lee: When someone asks me, “Where are you from?” I ask them, “Would you like the long version or the short version?” I was born in Seoul, South Korea, and the whole family moved to the States, to New Jersey, because my father went to school at Mannes College [of Music] in New York. From there we moved back to Korea when he finished his studies, then we were in Vancouver, Canada, and then I moved to France. I lived in Paris during my middle school and high school years as a teenager. That was where I met this wonderful teacher. I had been playing violin all along because, of course, my whole family are musicians, but this teacher really made me completely fall in love with the violin and music.

ArtsATL: Was that the turning point for you wanting to become a professional musician? Lee: That was when I started practicing hard on my own. That was when I picked up the violin and the next time I looked at my clock an hour had passed, which is a sign I’m really enjoying what I’m doing. He really opened me up that way. This was when I was 14. I was living in Paris, and a lot of things were difficult, being a teenager and not speaking the French language fluently. The violin was, in a way, the only thing that I felt familiar with and at home and comfortable with. Perhaps that’s what made me work harder. I could see I was progressing, but it felt safe.

ArtsATL: I imagine playing both violin or viola feels like less of a purist approach to music making, yet a little more flexible than focusing on one or the other.

Lee: I actually think they help one another. When I started playing viola, I noticed right away that it helped my violin playing. I encourage violin students to learn at least a year or two of viola. I think it’s also good for violinists to play viola in chamber music to have that other perspective, other role. I think the more you’re open as a musician — like linguists, if you’re speaking different languages — the more vocabulary or repertoire that you have, the better you can be at what you do. I try to live that type of life in anything I do. I think that having diversity is healthy.